Of all relationships between China and the United States, the military one has traditionally been the most difficult. For more than two decades, while relations between the two great powers in other fields had gone through ups and downs, defense relations had been trapped in an on-and-off pattern. Lack of understanding and deep-rooted suspicion had kept military ties at a low level and rendered them highly vulnerable. However, recent years have witnessed more positive developments, and some observers have even cheered the military relationship as a highlight in generally downhill bilateral relations. It seems that the China-US military relationship has entered a state of “new normal”, in which progress is encouraging, though challenges are daunting. 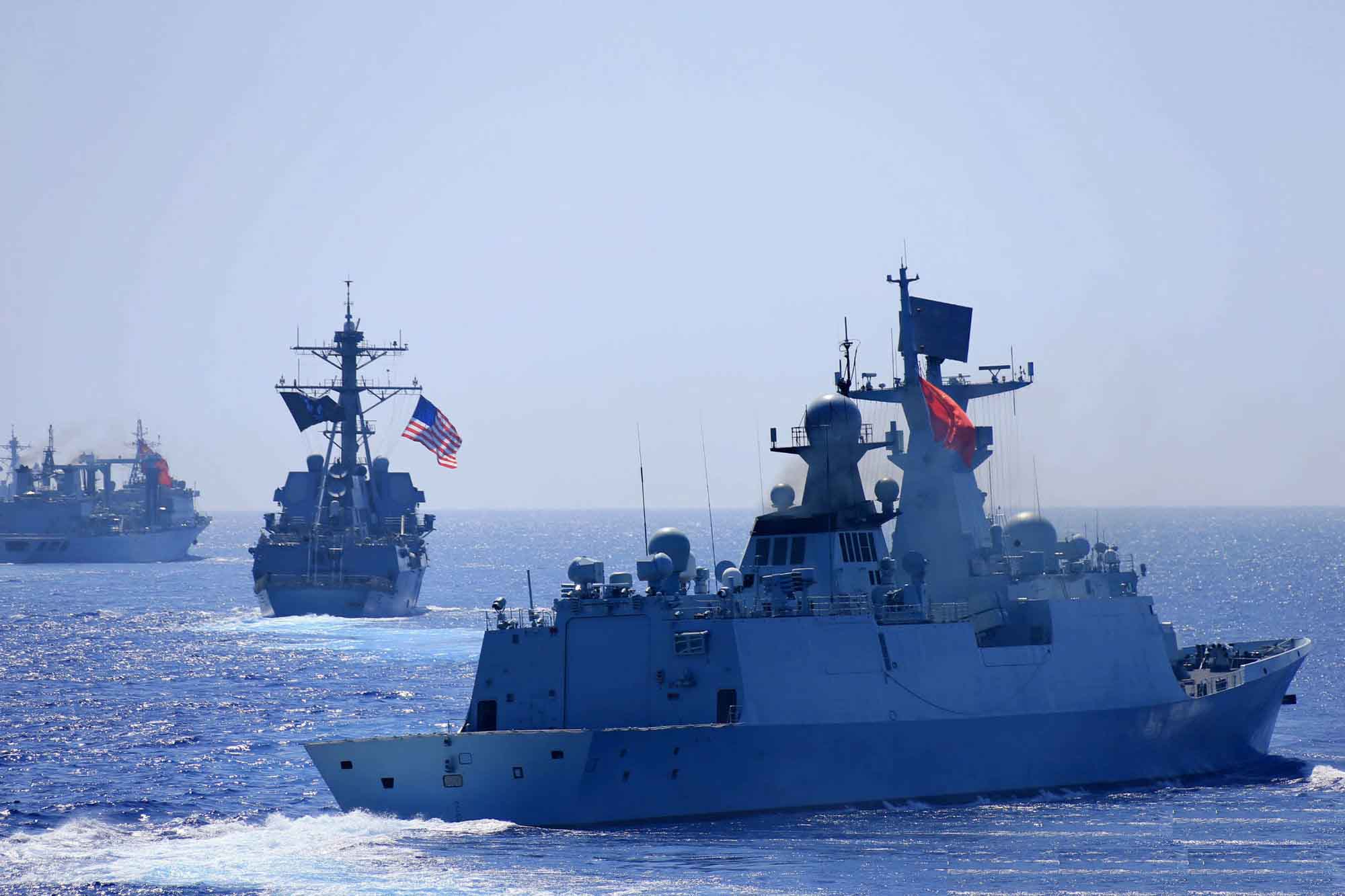 The Hengshui frigates sails behind an Arleigh Burke class destroyer and the Gaoyouhu supply ship, all on their way to Hawaii in the RIMPAC 2016 Exercise.

One positive development in this “new normal” pattern is the newly found resilience in the mil-mil relation. The mutual understanding is that military ties are so important that they have to be maintained even in difficult times. The Chinese PLA and the US military are now interacting with each other with more frequency and greater density. The Chinese navy’s participation in the RIMPAC 2016 Exercise hosted by US Pacific Fleet, and the consecutive visits to China by Adm. John Richardson, Chief of Naval Operations; Adm. Scott Swift, Pacific Fleet Commander; and Gen. Mark A. Milley, Chief of the Army Staff, are examples of unimpeded communication and exchanges at times when the two countries are pointing fingers at each other in the South China Sea and on the THAAD deployment decision. High-level visits have not only been frequent in number but also candid and communicative in style.
The “New Normal” also features the extension and deepening of institutionalized exchanges and dialogues. Annual Defense Consultative Talks and Defense Policy Coordination Talks between the two military establishments have been carried on in a more interactive and constructive way. The mechanism of the Maritime Management Consultation Agreement, in which both sides have tried to work out ways to avoid accidents at sea and in the air, has yielded concrete results. At the national level, defense officials on both sides have participated in the Strategic and Security Dialogue. Meanwhile, the two militaries have worked to set up new dialogue platforms between defense counterparts, such as between the strategic planning organizations and the services.
Functional exchanges make up the substance of military relations, including reciprocal visits by military academies and schools, academic exchanges such as a seminar on international issues jointly sponsored by the Chinese Academy of Military Science and the US Army War College, the exchange between military medical units, counter-terrorism units, cooperation of archivists to locate the remains of US MIAs during the Second World War, and port calls. Recent years have seen more joint exercises than ever before, such as a counter-piracy joint exercise in the Gulf of Aden, HADR (humanitarian assistance and disaster relief) exercises in both China and the US, and SAR (search and rescue) exercises in conjunction with port visits. Functional exchanges are the essential way to build trust and develop the habit of cooperation. The two militaries carry out more than 50 exchange programs every year.
Another new development worth noting in this “New Normal” are the measures and mechanisms to prevent and manage crisis between the two militaries. At the end of 2014, the US Department of Defense and the Chinese Ministry of National Defense agreed upon two MOUs (Memorandums of Understanding), one on notification of major military activities, another on rules of behavior for safety in air and maritime encounters. Last year, an annex of “military crisis notification mechanism for use of the defense telephone link” and an air-to-air part of the rules of encounters were added to the two MOUs. Crisis-prevention management and confidence-building measures are important new elements in the relationship now that both militaries find themselves encountering each other frequently. They are crucial stabilizers even in the worst circumstances.
In addition, the China-US military relationship now goes beyond its traditional bilateral boundary, and moves into regional and even global arenas. With the Chinese military extending its global reach, it finds more occasions to cooperate with its US counterpart. For example, both militaries take a major supporting role in the ADMM+ framework joint exercises on HADR, MM, SAR, counter-terror, and so on. Chinese and American naval patrol ships carry out joint drills each year in the Gulf of Aden. The Chinese naval vessels, together with Russian, American and Norwegian vessels, have jointly accomplished the UN mission to destroy chemical weapons from Syria. Even though military cooperation in a multilateral framework is still nascent, it foretells a “New Normal” where the two militaries may have more common interests and share more common responsibilities.
However, the “New Normal” pattern has a negative side too. China’s bilateral disputes with its neighbors, some of whom are US allies, have brought the two militaries to new frictions, triggering significant multilateral and regional ramifications. For China, territorial integrity is the vital national interest, and for the US, the credibility of its defense commitment to allies is key to its regional security architecture. The current US military moves, including deployment of the most advanced weaponry to the Western Pacific, increase of forward military presence, large-scale allied exercises, FONOPs in the South China Sea, new defense arrangements such as the rotational deployment to the military bases in the Philippines, upgrading of the security treaty with Japan, arms sales to China’s neighbors, and the decision to deploy a THAAD system in the ROK, all give China the impression that the US is using its alliance framework to suppress China’s rise, especially in the military dimension. This has proven to be a major obstacle to further improvement of military relations.
To sum up, the current China-US defense relationship is more resilient, substantive, and extensive than before. However, to keep it on a positive track, there is much to be done.
Mil-Mil Relations
printTweet
You might also like
Back to Top
CHINA US Focus 2018 China-United States Exchange Foundation. All rights reserved. Disclaimer