The Philippines v. China: Tragedy and The Hague

After much anticipation and speculation from the chattering classes, the Hague Permanent Court of Arbitration has issued its award in the South China Sea arbitration case Philippines v. the PRC. The Tribunal’s decision concurred with Philippines on virtually every question that it considered within its jurisdiction, systematically rejecting China’s claims and censuring its behavior. The Tribunal’s decision will be analyzed without end, but its five principal rulings are clear. First, the so-called “nine-dash line” does not grant China any historic rights to resources in the South China Sea. Second, according to the Tribunal, none of the land features in the Spratly Islands are in fact islands: a handful are rocks, which generate twelve-mile territorial seas, but no feature generates an exclusive economic zone. Third, China has violated the Philippines’ rights in its exclusive economic zone by constructing artificial islands and allowing Chinese fishermen to fish in the Philippines’ waters. Fourth, China has unlawfully harmed the region’s reefs and ecosystem. And finally, China’s land-reclamation during the course of the dispute constituted tampering with evidence. 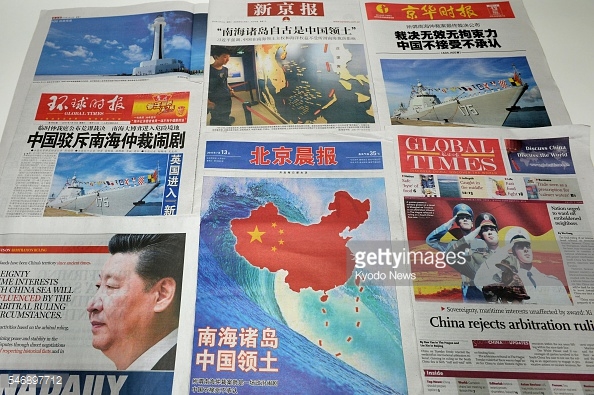 The Chinese Foreign Ministry, which has never acknowledged the Tribunal’s jurisdiction in the matter, responded simply:  “The award is null and void and has no binding force.” Other commentators have observed, “No permanent member of the UN Security Council has ever complied with a ruling by the PCA on an issue involving the Law of the Sea.” China’s rejection of the decision is not something uniquely Chinese but standard great-power behavior. Still others point out that America’s position—which enjoins Chinese acceptance of the decision—is contradictory not simply because the U.S. has not signed UNCLOS, nor even because it has never submitted itself to the jurisdiction of an international court in a matter it deems a vital interest, but because its defense of the “rules-based order” is selective: the U.S. challenges “excessive maritime claims,” except when it doesn’t.

It is true that in refusing to recognize the Tribunal’s jurisdiction China has acted no differently than other great powers. It is also true that the U.S. is in no position to criticize China’s decision as it is itself unwilling to submit to the authority of the Hague Tribunal in maritime matters. And it is furthermore true that the U.S. has politicized the issue by opposing, with the garb of legality, Chinese actions that are in fact perfectly legal—e.g., declaring a ADIZ in the East China Sea or reclaiming land in the South China Sea.

But this does not matter.

What matters is the belief that there is something called a “rules-based order” and that the U.S. is the Sheriff that enforces this order, while its allies are the posse that back its enforcement activities. Since the 1990s, the U.S. has been wary of China’s rise and eager to maintain the military primacy that protects its order. Since 2010, when Hillary Clinton injected the U.S. into the South China Sea dispute, and thereafter as the “pivot to Asia” was implemented, America’s opposition to China’s rise has intensified as China was increasingly seen as violating “Asia’s widely-supported and time-tested, rules-based operating system.” The decision of the Hague Tribunal codifies this perception and confirms the belief of the U.S. elite that a newly powerful China is unashamedly violating international law and norms.

China’s rejection of the Tribunal’s decision, and presumably its continuation of land-reclamation and other activities in the South China Sea, will now become evidence that China is rejecting Asia’s “operating system” and seeking to overturn the region’s order, which “elevates principle over strength, consent over coercion, and the global commons over protected spheres.” China will increasingly be seen by America and its allies as a “rogue” state that needs to be put in its place. American foreign policy gurus have already been outlining how the U.S. should respond: reduce economic cooperation, strengthen China’s neighbors, and boost American military spending and deployments in the region. Advocates of this grand strategic paradigm (“balancing”) do not yet entirely control U.S. foreign policy. But herein lays the danger of the Hague ruling: it may becomes a cause célèbre that is used as a sort of “red line” for the U.S. as it works to enforce the Tribunal’s decision through propaganda, pressure on China, and revived regional alliances.

What does this mean practically? How the Philippines will respond under its new President Rodrigo Duterte is admittedly an open question. He has shown signs of being a pragmatic leader willing to make a mutually beneficial deal with China and does not seem to have the anti-China persona of his predecessor. Let us then suggest two scenarios.

If Duterte does make a deal with China—perhaps along lines he has previously suggested—then the decision of the Tribunal will have become irrelevant: the maritime dispute will have been solved through diplomacy rather than law, and the new de facto arrangement will have replaced the de jure ruling of the Tribunal. A China eager to sweep the Tribunal’s findings under the rug would also be eager to negotiate and would therefore ensure any agreement was sweet for the Philippines. Duterte, meanwhile, can plausibly claim that the Hague arbitration wasn’t his idea and commit, going forward, to working with the PRC to resolve differences.

In contrast, if the Philippines insists on the substitution of law for diplomacy, that is to say the full implementation of the Tribunal’s award, then China will be forced to react assertively to demonstrate its great power status. No rising great power—certainly not the U.S. in its day—could meekly accept such condemnation. To do so would engage domestic nationalists, yes, but more importantly would signify impotence in the face of international pressure. Meek acceptance would also permit the establishment of a precedent whereby any neighboring state could litigate against China to assert its own interests. Chinese power would hence come to mean nothing, for in the law all states are equal. This notion of sovereign equality is accepted by no great power: that is why, for instance, the U.S. historically “intervened” frequently in Central America and continues to meddle at its pleasure—e.g., Libya—today.

A forceful Chinese response could include a declaration of an ADIZ in the South China Sea or the occupation of Scarborough Shoal, and even building on it. The U.S. Defense Department is widely speculated to have come up with planned responses to such a Chinese reaction. Likely this would involve lots of anti-Chinese rhetoric, more naval patrols, “freedom of navigation operations,” and perhaps new defense cooperation with the Philippines. In the long run, a much more disturbing outcome is probable: a new agreement between the Philippines and the U.S. to permanently station U.S. naval forces—perhaps a whole aircraft carrier fleet—at the old U.S. base at Subic Bay. Already 6000 U.S. Navy personnel are rotating through annually and aircraft carriers are docking there. Intense U.S. positioning and use of Subic Bay would indicate that America is committed to challenging China in the South China Sea. This challenge would become the propeller of the U.S.-China relationship, and the direction of propulsion would be towards conflict. Crises would follow, as would trade restrictions and the end of global cooperation. If we were unlucky, a naval spat could turn into a war.

All this because of some Hague Arbitral decision? Not precisely. All this because of a paradigm shift towards containment, a shift facilitated by the legalism of American foreign policy elites—the same legalism decried by E.H. Carr and George Kennan half a century ago. Contemporary historical consciousness has been blind to America’s own past, and, regardless, judges all Chinese actions by a presentist standard that would make the most Whiggish historian blush. When the U.S. was at China’s stage of development, it was busy conquering Hawaii, Cuba, Puerto Rico, and the Philippines and enforcing its own mare nostrum in the Caribbean. It had long already stolen half of Mexico. Why the territorial acquisitions of 1898, asked Kennan? “The American people of that day, or at least many of their more influential spokesmen, simply liked the smell of empire and felt an urge to range themselves among the colonial powers of the time, to see our flag flying on distant tropical isles, to feel the thrill of foreign adventure and authority, to bask in the sunshine of recognition as one of the great imperial powers of the world.”

China, in contrast, is pursuing a set of territorial claims that originated not with the PRC but the ROC. The claims are not new, and by and large China has pursued them peacefully. Nor is China looking for a colonial empire. Nonetheless, China is condemned because it is tried by a standard—indeed, a standard of civilization—that requires new great powers to act in precisely the same manner as small powers. This is utopian and dangerous, but it is just this that is codified in the Tribunal’s decision. International politics is not and should not be conducted according to the diktat of the mighty—this is one of the great lessons of Thucydides’ history of the Peloponnesian War. But neither can the realities of power be wished away, replaced by legal rulings, or stricken by a principle of equality. Any such attempt is likely to actually break the international community that the law intended to sustain. Carr put it this way: “There must be a clear recognition of that play of political forces which is antecedent to all law. Only when these forces are in stable equilibrium can the law perform its social function without becoming a tool in the hands of the defenders of the status quo. The achievement of this equilibrium is not a legal, but a political task.”

The Hague Tribunal this week issued a decision that will most likely become a tool in the hands of the defenders of the status quo. How events will develop will depend on Duterte’s disposition, China’s diplomatic sagacity, and America’s response. If the China and the Philippines are unable to meet somewhere in the middle, it is the “law” that China will reject. Already there is talk of China withdrawing from UNCLOS. This “law,” admittedly, has not been followed by any previous rising power. But because it today represents the whole package of contemporary norms, it is likely to serve as a test case for American elites in determining whether China is a revisionist power. By substituting law for politics, the U.S. and its posse have forced China into a position where it must choose between its national prestige and status as a great power and its commitment to act according to accepted norms. It’s no mystery China will act as all great powers act and choose the former. The tragedy of the situation is that this will be interpreted as a general rejection of the status quo and will lead to intensified conflict. But the truth of the matter is not that China will have been tested and found wanting; it is that China will not have been tested fairly at all.