The failed containment of the COVID-19 pandemic is about to result in 50 million cumulative confirmed cases and more than 1.2 million deaths around the world.

Worse, the official figures are only a tip of the iceberg. Some 10 percent of the world population may already have had the new coronavirus, according to the World Health Organization (WHO).

Consider the implications: that translates to 780 million people – almost 20 times the official total. The global stakes are far higher than currently acknowledged.

In early November, the cumulative confirmed cases in the United States will surpass 10 million; in India and Brazil, 9 and 6 million cases, respectively. Meanwhile, several economies in the Americas and, once again, in Western Europe and Russia are coping with secondary waves.

At the end of October, the daily confirmed new cases remained highest in the US, where they were rising for the third time, and India, where they were falling (over 60,000 in each). The two were followed by Brazil, Argentina and Colombia, where cases were stagnating, and France, Russia and Spain, where they were climbing.

From March to early April, the first U.S. wave peaked at some 32,000 daily cases. Daily numbers more than doubled to 67,000 during the second wave in June-July,. As the third wave ensued after mid-September, those figures exceeded 70,000.

In Western Europe, countries that initially tested inadequately (France) or emulated the U.S. stance of minimal intervention (UK) have had peaks of 20,000 to 35,000, respectively. Countries that implemented broader interventions (Germany) are also coping with new peaks but the numbers are significantly lower (Figure 1). 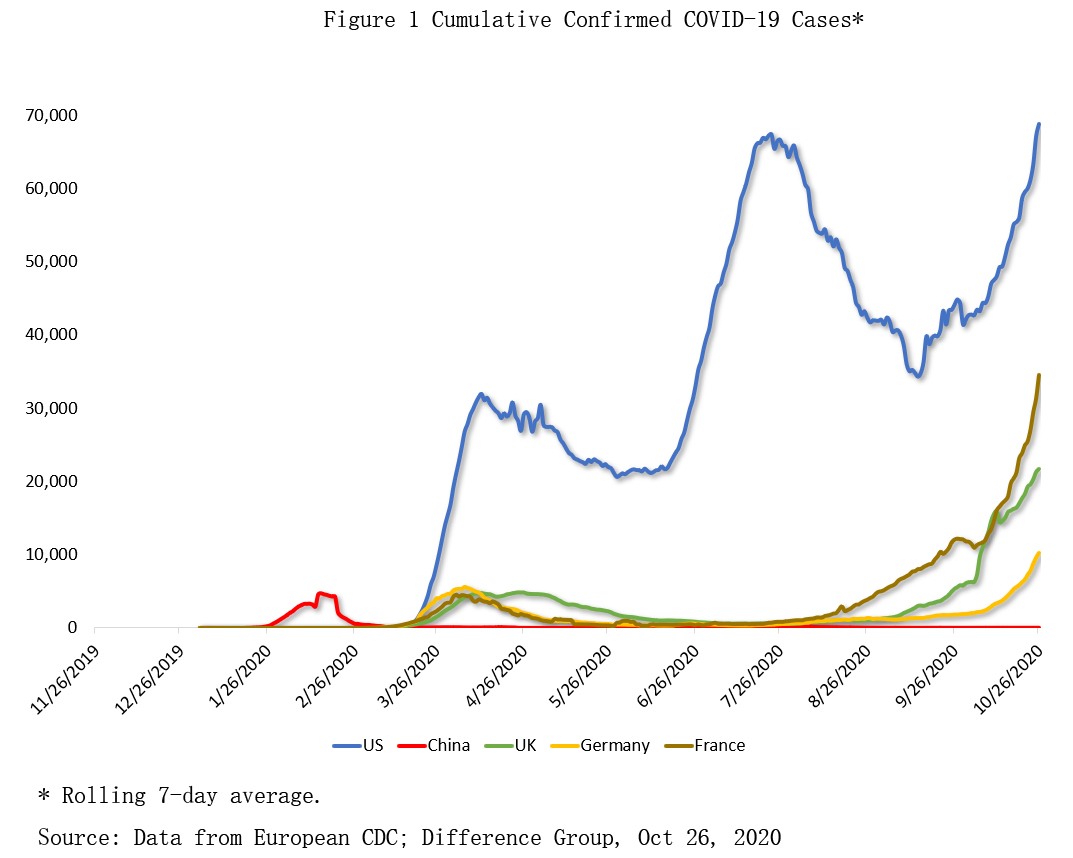 Policymakers use models to provide estimates of the true number of daily new infections. In these models, the projected actual infections far outnumber confirmed cases, although they differ by how and how much infections have changed over time. Here the focus will be here on (mean) estimates by Imperial College London (ICL) (Figure 2). 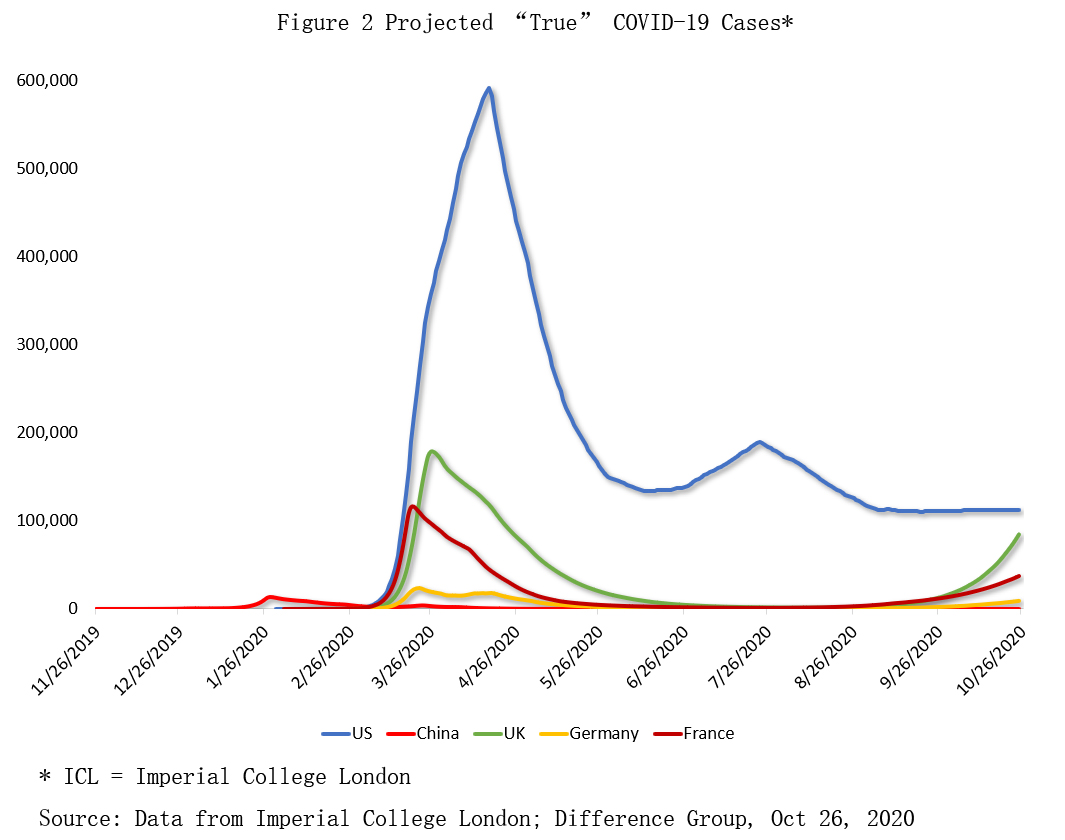 In this view, the early trendline was relatively highest in spring, due to high infectiousness and minimal testing. The peak of the U.S. pandemic likely occurred in March-April when the projected daily cases peaked at about 600,000 (20 times higher than the official figure). The second wave caused another escalation to 190,000 cases (almost three times higher), while the current cases average around 110,000 (almost double the official figure).

The stakes were arguably highest in China, which had to cope with the outbreak first. In the mainland, the daily confirmed cases soared to more than 4,000 in early spring. However, the projected daily count may have been closer to 124,000 (30 times higher than the confirmed figure). Yet, rapidly- and broadly-implemented quarantines bent the epidemic curve in just a few weeks, thanks to China’s reliance on science-based public-health measures.

If, instead, China had opted for the delays and denials of the Trump administration or the UK’s initial stance of not-so-benign neglect, such a scenario could have resulted in a global catastrophe, due to the world’s most populous nation, the peak travel season and the epicenter in the major transportation hub of Hubei.

Since early spring, the vaccine race has been on among 180 candidates, over 40 of which are being tested in humans, especially by US, UK and Chinese drug giants.

Despite some challenges, Oxford University/ AstraZeneca (UK) hopes for a late fall 2020 release. Like AstraZeneca, Johnson & Johnson (U.S.) had to temporarily stop trials after participants fell ill in the process. Following a delay of large-scale human testing with government regulators, Moderna (U.S.) aims to start distribution in early 2021. Pfizer (U.S.) has four vaccine candidates still in early-stage human trials, but two have been fast-tracked by U.S. regulators.

In the meantime, China’s SinoVac is currently testing its vaccine on 10,000 volunteers in China, 9,000 in Brazil and a smaller group in Indonesia; and the state-owned SinoPharm on 15,000 in the Middle East and Latin America.

Last July, the emergency use of experimental COVID-19 vaccines was authorized in China. In mid-October, the city of Jiaxing, south of Shanghai, began to offer a vaccine under development by Sinovac, focusing on medical workers and and other key groups. Having administered the drug to diplomats and workers traveling to Belt and Road countries, SinoPharm offered its drugs for free to students planning to study abroad, and 168,000 signed up.

In this pandemic, it’s the weakest links that shape the future. Medical and scientific experts in the West remain concerned about outcomes if people refuse to take the vaccines when they become available. According to new research, the willingness to take “a proven, safe and effective vaccine” is the highest in China (87%), but significantly lower in the West, particularly in Eastern Europe.

Launched in April by the WHO, France and the Gates Foundation, the COVID-19 acceleration mechanism (ACT) seeks to provide innovative and equitable access to diagnostics, treatments and vaccines.

As WHO chief Dr. Tedros has warned, “vaccine nationalism will prolong the pandemic, not shorten it." To avoid such scenarios, over 180 countries are considering participation in COVAX, a global initiative to provide countries equitable access to vaccines. It is critical to lower-income countries, and vital to higher-income self-financing countries without bilateral deals with manufacturers.

Recently, WHO and Vaccine Alliance (GAVI) applauded China’s decision to join the COVAX. In contrast, the U.S. has spurned the initiative, which aims to secure 2 billion doses of a safe and effective vaccine by the end of 2021.

As the projected estimates suggest, the stakes of the COVID-19 pandemic struggle, and the broad implementation of ideal mass vaccinations are multilateral and global challenges. Conversely, unilateral stances fuel new pandemic waves and delays in remedies.

Last April, amid the first COVID-19 wave in the U.S., President Trump sought to shift the blame by halting U.S. funding to WHO. In May 2020, before the end of the review period, Trump declared that the U.S. would “terminate” its relationship with WHO. The timing of these unilateral decisions by a major WHO funder threatened to undermine the world organization’s activities at the worst possible moment.

The global pandemic’s effects can only be overcome through multilateral international cooperation across all political differences. In the absence of such cooperation, those effects will only compound new, negative scenarios.

COVID-19MultilateralismGlobal Governance
printTweet
You might also like
Back to Top
CHINA US Focus 2022 China-United States Exchange Foundation. All rights reserved.