United Nations Conventions on the Law of the Sea (“UNCLOS”) is one of the most relevant international instruments in today’s current disputes that spread from Southeast Asia to the United States. There are 168 states that have ratified or acceded to UNCLOS. The U.S. has not yet acceded to UNCLOS. The result of the Philippines vs. China arbitration might provide an excuse for those advocating for the U.S.’ non-accession. 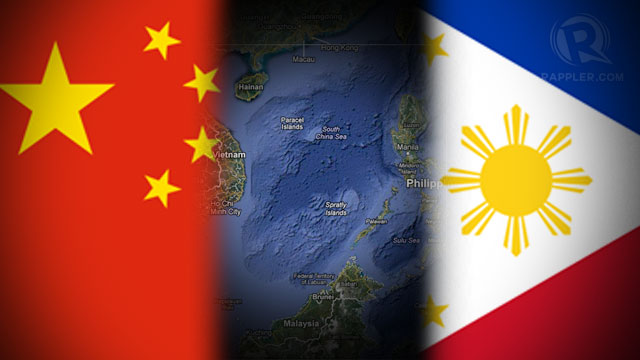 The Philippines initiated the arbitration against China on 22 January 2013. China contended in public statements that the ad hoc arbitral tribunal set up under Annex VII of UNCLOS did not have jurisdiction over the claims made by the Philippines as the subject matter of the claims related to territorial sovereignty and maritime delimitation, matters excluded from the jurisdiction of the compulsory dispute mechanism of UNCLOS.

For a tribunal to have jurisdiction in an arbitration conducted under Annex VII of UNCLOS, there are a few fundamental conditions that have to be met. First, a dispute must be identified from the exchanges or conduct of the parties. Second, the dispute must be found to have existed before the initiation of the arbitration. Third, the condition precedents to arbitration must be satisfied. In other words, parties must have complied with any agreed mechanisms of dispute settlement and/or an exchange of views before initiating arbitration. Fourth, the identified disputes must then be characterized as to verify if it is precluded from the compulsory dispute settlement mechanism by reason of the limitations set out in Article 297, or by the exceptions declared by the state under Article 298.

In 2006, China made a declaration under Article 298 that stated no tribunal shall have jurisdiction over disputes “concerning… Articles 15, 74 and 83 relating to sea boundary delimitations, or those involving historic bays or titles…. or any dispute that necessarily involves the concurrent consideration of any unsettled dispute concerning sovereignty or other rights over continental or insular land territory.” This exclusion is one of the grounds for China’s contention against the tribunal’s jurisdiction. 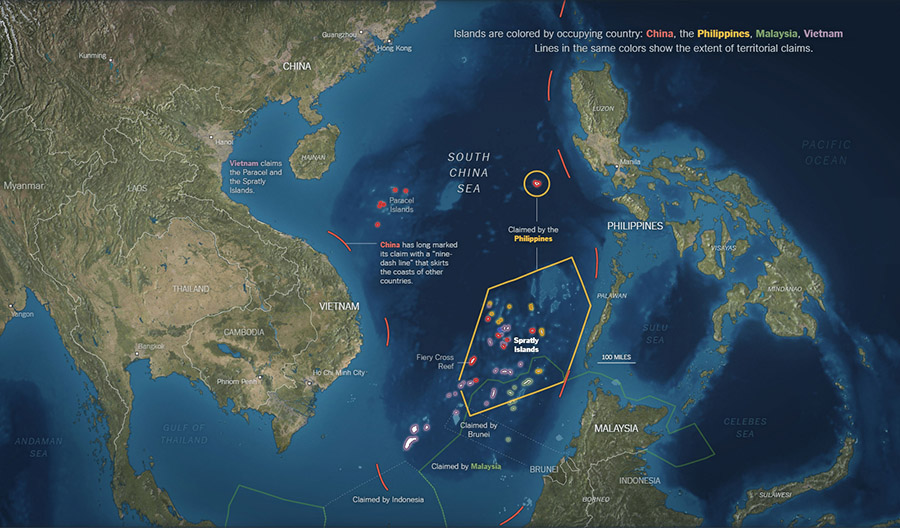 Is there a dispute over whether the islands in South China Sea (e.g. Tai Ping Island, also known as Itu Aba) are “rocks” or “islands” at the commencement of the arbitration?

When finding it had jurisdiction in the October 2015 award, the arbitral tribunal did not cite any evidence to show that the Philippines and China had ever discussed, let alone disputed, whether the specific “maritime features” identified in the claims were “rocks” or “islands.” The tribunal relied on an assumption that parties in dispute on territorial sovereignty and overlapping maritime boundaries must also be disputing whether features are “rocks” or “islands,”, and thus subject to its jurisdiction.

No dispute, thus no negotiation on the issue of whether features are rocks or islands?

The fact that there was no dispute on the issue of whether, for instance, Tai Ping Island is a rock or an island means that the two states have not discussed, negotiated, or exchanged views on such matters. The pre-condition for arbitration naturally cannot be said to have been satisfied.

Breadth of the exclusion under Article 298

The wording of Article 298 was widely drafted, and so were the exclusions declared by each state under it. The segregation of one “aspect” of a sovereignty dispute is arguably artificial, and taking it out of context. The determination of the nature of the maritime feature necessarily “concerns” (meaning “has a bearing on” according to MV Louisa) and “relates to sea boundary delimitation,” a matter excluded from the tribunal’s jurisdiction under Article 298. By adopting such an artificial approach, instead of characterising the dispute by reference to where the relative weight of the dispute lies in deciding if the dispute primarily concerns sovereignty or sea boundary delimitation, the tribunal effectively clothed itself with jurisdiction to rule on the sea boundary delimitation. This may undermine the trust states have placed on the dispute settlement mechanism, and disrupt the international legal order enshrined in UNCLOS.

Tai Ping Island (Itu Aba) has a long history of human habitation with many structures that have long existed on the island. The evidence was brought to the tribunal’s attention in an amicus curiae brief before it.

After the Second World War and the treaties that stemmed from it—such as the Cairo Declaration, the Potsdam Declaration and the Treaty of San Francisco—all the islands in the South China Sea were returned by Japan to China. Since then, if not earlier, China has indisputably exercised jurisdiction over these islands and the adjacent waters, including Tai Ping Island, and have stationed civilians and government officials there. This happened with the involvement of major states, including the U.S.

Having seized jurisdiction to decide the issue of rock or island under Article 121, the tribunal decided in the July 2016 award that whether a maritime feature is rock or island depends on the objective capacity of the feature—whether in its natural condition, the feature can sustain either a stable community of human inhabitation or economic activity that is not dependent on outside resources.

It has been said that such an interpretation is a re-definition of Article 121 of UNCLOS. A plain reading of Article 121 does not incorporate these additional qualifications of independence of outside resources, etc. There appears to be no evidence from the travaux preparatoires that suggest this was the intention of the states either.

The tribunal’s decision does not seem to make logical sense. Article 121 as drafted, positions “rock” as the subset of “island.” The tribunal’s decision reverses this. Practically speaking, some island states, which, in their natural condition, do not have adequate resources such as potable fresh water to sustain a stable community of human inhabitation may now be considered “rocks,” and by Article 121(3), will be deprived of an exclusive economic zone or continental shelf.

More interestingly, in a roundabout way, the tribunal concluded that, after deciding  all the maritime features to be “rocks,” these “rocks” do not have an exclusive economic zone and have no overlapping maritime boundaries. Therefore, presumably, the tribunal could justify its earlier decision that it had jurisdiction.

Some have criticised the interesting finding that Tai Ping Island is a “rock” as an attempt to avoid facing the inherent jurisdictional defect: If Tai Ping Island were found to be an “island,” it would have an exclusive economic zone of 200 nautical miles, resulting in overlapping maritime boundaries of dispute, and thereby meaning that the tribunal does not have jurisdiction in the first place.

In 1948, China’s official map shows the eleven-dash line. In 1953, China illustrated in its map the nine-dash line, with two dashes at the Gulf of Tonkin removed. According to the award, this was challenged 61 years later when some states objected to the Notes Verbales of China stating that it had sovereignty over the islands in the South China Sea and adjacent waters, and enjoyed sovereign rights and jurisdiction over the relevant waters. 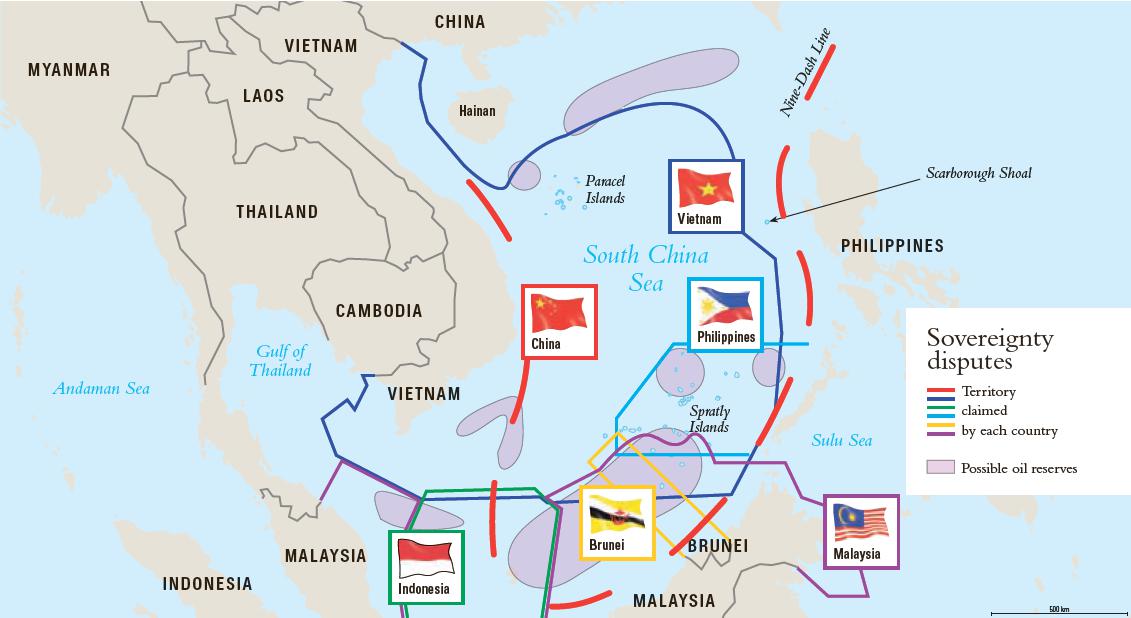 In 1953, China illustrated in its map the nine-dash line.

One would have thought that it is clear that the disputes between the parties relating to the nine-dash line are clearly of territorial sovereignty and concerning sea boundary delimitation. Nonetheless, the tribunal concludes that it has jurisdiction to decide if the nine-dash line is illegal. The question of jurisdiction is said to turn on whether the claim of China is based on historic rights or historic title.

The tribunal found that the claim was based on historic rights because, inter alia, there was navigational freedom afforded in waters and air space within the nine-dash line, and that the 2011 Note Verbale of China to the UN claiming “historic titles including sovereign rights and jurisdiction” within the nine-dash line was a result of “an error in translation or an instance of imprecise drafting.”

In Nicaragua v USA, the ICJ ordered the U.S. to pay monetary compensation to Nicaragua. The U.S. did not comply with the judgement of the ICJ and instead resorted to negotiation with Nicaragua. Ultimately, in exchange for certain aid from the U.S., Nicaragua passed a law to forego its claims for the judgement debt against the U.S..

The tribunal in the Chagos case ruled in favour of Mauritius, declaring the March 2015 award that the Marine Protection Area unilaterally introduced by the UK in the Indian Ocean in 2010 as illegal. The UK does not accept the ruling of the award and has not complied with it. Again, she resorted to negotiation with Mauritius with a view to settle the disputes. The last meeting was in November 2015, and it is reported that further meetings between the two states are expected to take place.

These two cases illustrate that states sometimes embark upon negotiation to resolve the true disputes and conflicts with the other state notwithstanding the publication of an award or judgement. Understandably, this will bring about a win-win situation to the states involved, maintain regional peace, and enhance stability and prosperity for the benefit of the relevant states and their nationals.

The awards in the Philippines v China case are not an end, but a chapter of a much broader and long-term relations between states. The award at best resolves some legal issues but cannot possibly be dispositive of all other conflicts, differences, and interests of the relevant states. These can only be properly and comprehensively addressed through the means that the relevant states involved in the South China Sea have in fact adopted through the November 2002 Declaration on the Conduct of Parties in the South China Sea, where China and the ASEAN states agree to “undertake to resolve their territorial and jurisdictional disputes… through friendly consultations and negotiations by sovereign states directly concerned.”

These differences or conflicts are best resolved directly between the two states under the prevailing Asian culture and core values of a non-confrontational approach, compromising sentiment, and a mutually understanding mind-set.

[1] 2002 Declaration on the Conduct of Parties in the South China Sea, article 4.