China is commemorating the 70th anniversary of victory of its War of Resistance against Japanese Aggression World War II against Fascism with great fanfare. The climax of these celebrations will be the grand military parade on September 3rd. This upcoming parade is unusual in that it has departed from the past rule that a parade is held every decade, only on National Day. It will feature memories from the war 70 years ago; of cruelty, sufferings, starvation, bloodshed and resistance. Meanwhile, it also shows Chinese authorities’ concerns for the reality at home and abroad through exhibiting its military modernization. 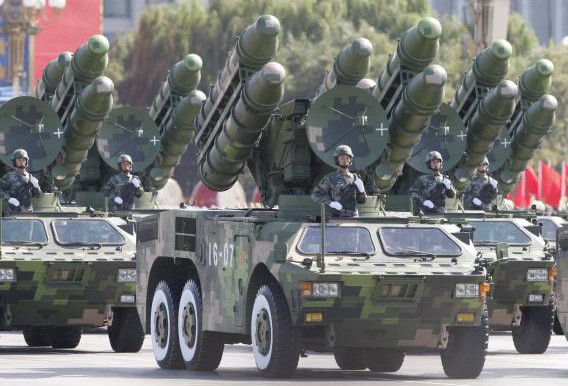 PLA will be showing off seven models of missiles from its DF series at the upcoming Sept. 3 military parade to celebrate the 70th anniversary of the end of World War II, reports western media.

Unfortunately, some politicians and media outlets in the West have responded less positively to the commemoration. In particular, some leaders of World War II Allied Forces have appeared indecisive over whether or not to accept Chinese invitation and attend the commemoration. None has responded positively to invitations for representatives of their military to participate in the parade.

Such more or less uncomfortable western responses are based ultimately on their profound worries about the potential impacts China’s development will exert on the political and economic patterns of the present-day world. These worries have appeared more realistic with Russia changing the administrative affiliation of Crimea and its conflict with Ukraine escalating. In some westerners’ eyes, China and Russia are interdependent, despite not forming any alliance. On the other hand, the recent maritime disputes between China and Japan and the Philippines in the East and South China Seas have resulted in some misunderstandings in the international community. In addition to that, the Chinese military’s efforts to update its air and naval capabilities, which were aimed at protecting its expanding overseas pathways for trade and resource imports while fulfilling international obligations, have inevitably touched some sensitive nerves. Let’s make this clearer: The truth behind those countries’ attitudes to China’s victory day parade is that the United States wants to contain China, Europe sits on the fence, and some countries in South East Asia fear or are suspicious of China’s rise.

Western indifference to the Chinese commemoration is a policy blunder that should have been avoided. This can even be considered as a foolish mistake. Few westerners truly understand how important the war 70 years ago was in opening up the Chinese people’s field of vision, and changing their opinions about the outside world. From the Opium War in 1840 to the Pacific War in 1941, the overall Chinese attitude to western countries could be summarized in one word: “Aversion”. There were many reasons for such aversion. Besides the resistance caused by their condescendence and bullying as colonialists in overseas expansions, the tremendous cultural differences between China and western countries, China’s relatively isolated geography, the existence of a patriarchal society, and the natural economy’s stubborn resistance against world trade, had all contributed to the fierce contradictions between them. The Boxer Rebellion and Eight-Nation Alliance Aggression of China were culmination of such conflicts. “Western devils” had been the average Chinese’s way of addressing westerners.

It was the war of aggression launched by Japanese Fascists, the loss of millions of Chinese lives, and the killing and rampage that had nearly eliminated China as a country and the Chinese as a nation that have reminded the majority of Chinese of their relationship with the rest of the world. Seeing the helping hands of the United States, Great Britain and the Soviet Union, the Chinese public became keenly aware that China, and the majority of the world’s countries, has much to share. It was the victory of that war that led to the relations of trust and friendship between China and the U.S. and European countries, as well as China’s participation in the creation of the United Nations. After the founding of the People’s Republic of China, despite such historical detours as the Korean War, it was on the basis of common understanding of the post-war world political pattern and economic order that had eventually resulted in the restoration of the People’s Republic’s representation at the UN. China has integrated in an all-round manner into the present-day world since Deng Xiaoping launched reform and opening up.

Thus it is difficult to understand why western countries do not avail themselves of the commemoration, to which China has paid so much attention, as a wonderful opportunity to review those good feelings. It was through the shoulder-to-shoulder fight with Allied Forces and the subsequent victory that had taught the Chinese that none of humanity’s significant strides forward could be achieved by any country alone. Real peace and prosperity could not be achieved without the concept of a “global community of shared destiny.” Connivance of any narrow-minded nationalist impulses or confrontation can only result in new disasters.

Xi Jinping and the Chinese leadership have chosen a path toward a “global community of shared destiny.” Western worries about the parade are not only unnecessary, but ridiculous.