Airstrikes Against Syria: A Win-Win or Lose-Lose for Trump?

At the order of President Donald Trump, the US military launched airstrikes against Syria from two warships in the Mediterranean in the wee hours on April 7, raining 59 Tomahawk cruise missiles at the Shayrat airbase in the central province of Homs. The strikes were meant as a “lesson” or “punishment” in retaliation for the chemical weapon attack, allegedly by the Syrian government, on April 4 in the province of Idlib, in which innocent civilians were killed or hospitalized. The airstrikes could mean a win-win or lose-lose on domestic and international fronts for Trump. 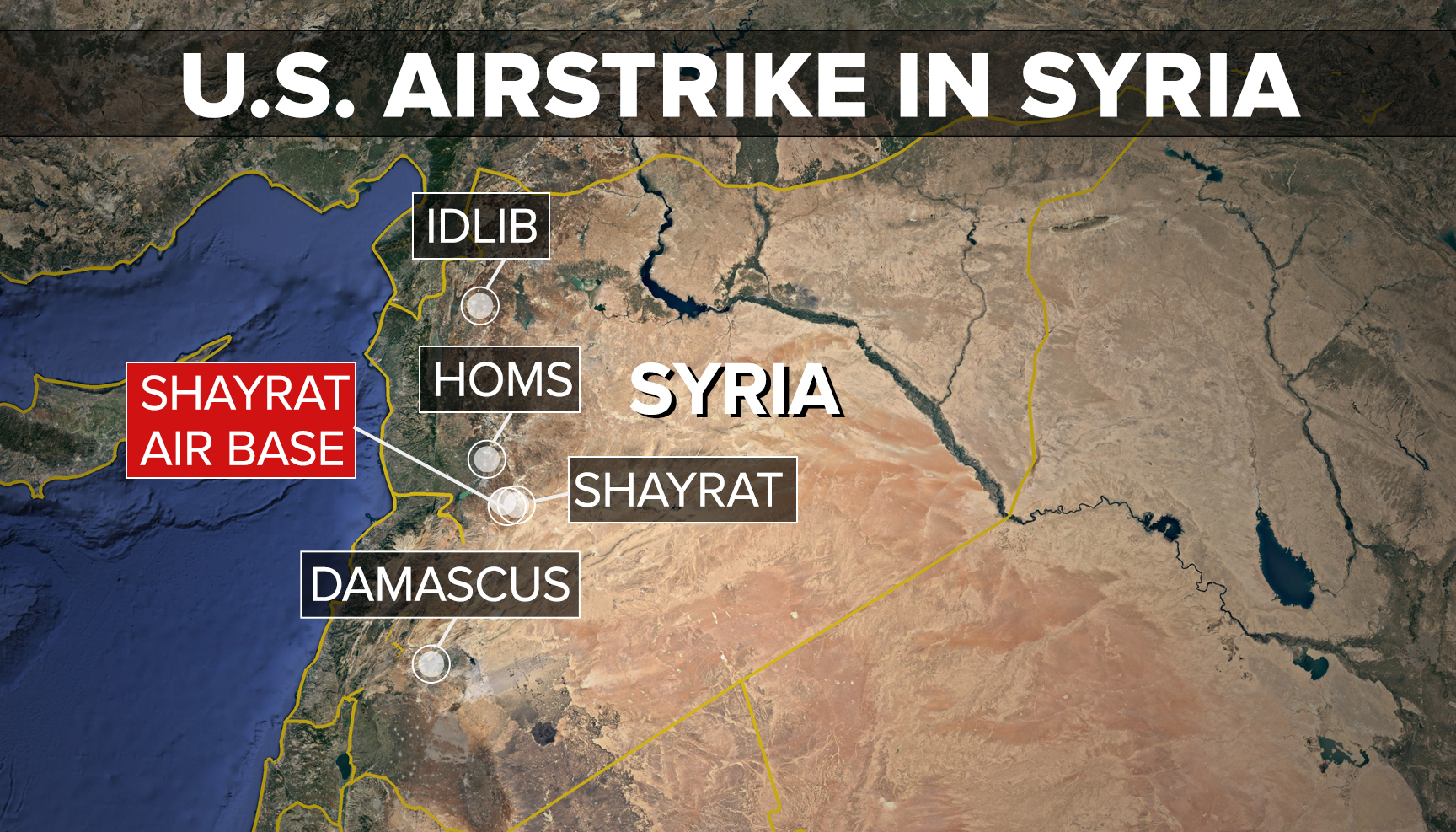 A map shows the location of Shayrat Air Base in Syria. (PHOTO: ABC News)

Let’s take a look at the win-win scenario. First, on the domestic front, the airstrikes could help Trump distance himself from the sticky allegations that he has unusually close ties with Russia. Not only was Trump pursued by the allegations that Russia meddled in the American election and helped him win, the Central Intelligence Agency is also investigating allegations about election hacks by Russia. Furthermore, Trump’s national security adviser Michael Flynn, just less than one month after having been appointed to that post, was forced to resign over his failure to disclose phone conversations with the Russian ambassador. This is unprecedented in American political history, especially ever since the position of the national security adviser was created after World War II. The airstrikes represented a direct confrontation with Russia, which supports Syrian President Bashar al-Assad. Trump’s action could ease domestic pressure on Trump, diminishing Democrats’ opportunity to attack Trump and his administration on the Russian issue.

Second, on the international front, it could be helpful in shaping and polishing Trump’s image and prestige as a “tough man”, and in showing US’ global leadership in terms of morality, values and military prowess. More than two months into his presidency, Trump has struggled with domestic resistance and opposition, from the US entry ban on nationals from some Muslim-majority countries and his executive order to repeal Obamacare, and he urgently needed a breakthrough in the diplomatic field. Since late March, the Trump administration has repeatedly threatened Kim Jong-un with force over North Korea’s nuclear weapon program, but dared not make such a dangerous move for the time being because of the complexity in the Korea Peninsula and the Northeast Asia security situation. The chemical-weapons attack in early April, however, rendered an unprecedented opportunity for the Pentagon and President Trump. The strikes, while serving as a lesson for Bashar al-Assad — long unpopular in the Arab world, could help achieve the following results. First, showing the difference between the Trump administration and his predecessor President Barack Obama. In 2013, Obama chose to back down when Syria crossed the “red line” of chemical weapons; the Trump administration, however, was resolute and took military actions in the shortest time possible. Second, helping build up the global leadership for the United States and Trump, by making a strong comeback of the US in the Middle East and even locking horns with Russia. Amid cheers and applause from US allies such as Saudi Arabia and Israel in the Middle East, Turkey, which once allied with Russia in the anti-terror alliance, also showed its support for US airstrikes against Syria, and this could indicate that Russia has started losing allies in the anti-terror alliance in the Middle East. 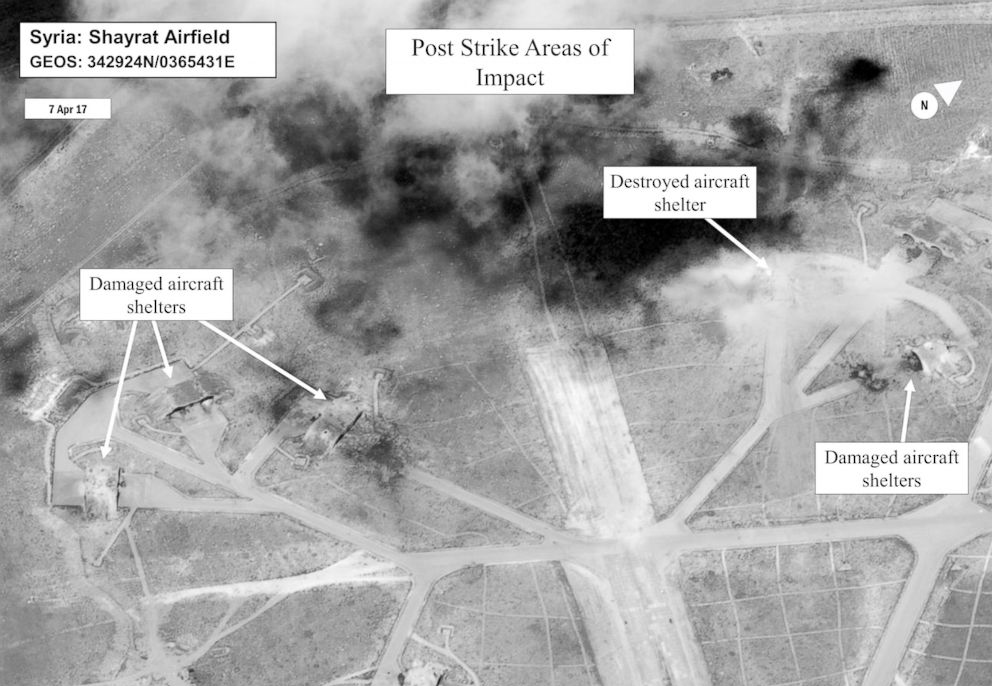 Satellite images show the airfield in Syria that was struck in the U.S. attack.

However, just like the two sides of a coin, the military strikes against Syria also inflicted damages on Trump. The lose-lose consequences from the strikes are evidenced by the following.

First, in the US political arena, Trump’s decision to wage airstrikes against Syria by bypassing the Congress further irritated and angered the Democrats. Senator Rand Paul said the airstrikes were not authorized by Congress and were therefore a violation of the US Constitution. The senator said that any military action must be subject to approval by the Congress. In addition, many of American public intellectuals also condemned the strikes, and the public also staged protests outside the White House, protesting against US military strikes against Syria, and denouncing the strikes as bellicose diplomacy and an aggression against a small and weak nation.

Second, on the international front, investigations into the chemical weapons attack in Syria are just beginning, and facts whether it was the Syrian government or the rebels that used chemical weapons are yet to be verified. Against such backdrop and without any authorization from the United Nations, the United States rashly resorted to force. This exposed the recklessness, impulsiveness and lack of sophistication of the Trump team in the diplomatic arena. This showed that the Trump administration did not have thorough discussions before making a major decision nor did it have an evaluation of its possible impacts. Worse, what was destroyed by the 59 Tomahawk cruise missiles was not only the Syrian airbase, but also the prospects for US-Russian cooperation in fighting against the Islamic State. During the presidential campaign and after his election win, Trump repeatedly stated that one of the top priorities for the American diplomacy is to eliminate the IS, and expressed his willingness to cooperate with Russia to achieve that goal. In fact, in the past one and half years, Russia cooperated closely with Syria, Iran and Iraq in the war against terrorist groups such as IS and had made a lot of significant progress. The US airstrikes, which angered Russia, Syria and Iran, are obviously detrimental to the cooperation within the global anti-terror alliance, and probably, the IS terrorists were the only ones who were actually cheering amid the explosions of Tomahawk cruise missiles.