What is Really Happening in Iran? 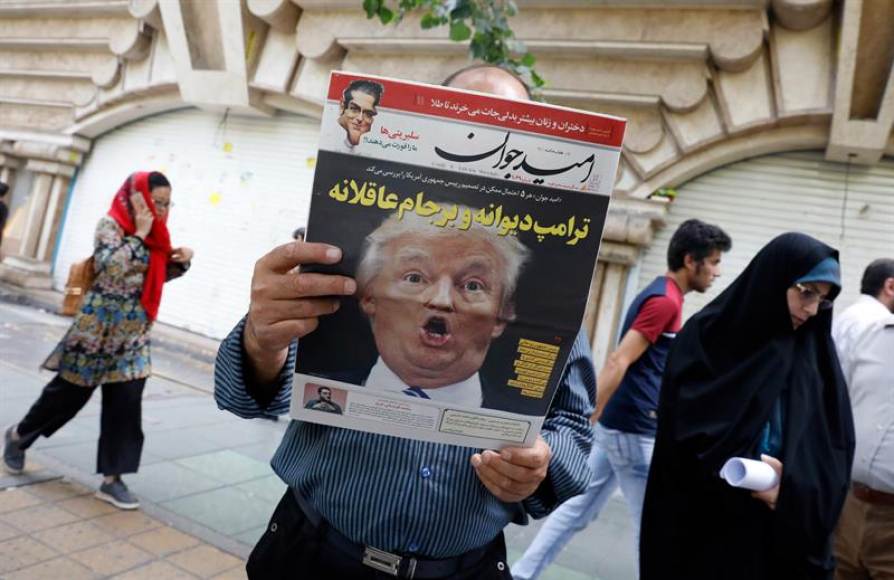 An Iranian man reads a copy of Iranian daily newspaper 'Arman' with a picture of US President Donald Trump on its front page with the title in Persian that reads 'Crazy Trump and logical JCPOA' on display in Tehran, Iran, Oct 14, 2017. (EPA/ABEDIN TAHERKENAREH)

At the end of December, a series of protests against economic policies erupted in Iran. As they spread, their scope expanded to include political opposition against the government. As President Trump tweeted his support for the protesters and criticism of the government, pro-government marchers filled the streets. According to Western media, the protests were the result of unfavorable economic policies by Iranian President Rouhani’s administration and popular dissatisfaction with the “theocratic regime.”

Supreme Leader Ayatollah Ali Khamenei accused unspecified “enemies” - reportedly, the U.S., Israel, and Saudi Arabia - for the turmoil. On January 3, the head of Iran’s Revolutionary Guards, Major General Mohammad Ali Jafari, announced the defeat of the "sedition" in the country.

Next, the Trump administration placed sanctions on five subsidiaries of the Shahid Bakeri Industrial Group - a defense group that is a key producer of Iran's ballistic missiles and that is already under U.S. sanctions.

Between 2010 and 2013, the sanctions hurt Iran’s economy contributing to the fall of crude oil exports from 2.5 million barrels per day to 1.1 million by mid-2013. That, in turn, was compounded by the plunge in oil prices since early 2014. Iran’s economy shrank by 9 percent in two sanctions years.

Since 2015, Iran’s economy has been stabilizing. Foreign energy firms have begun making new investments in Iran’s energy. The relief also contributed to the political victory of Iran’s President Hassan Rouhani in the May 2017 presidential election. Growth has begun to broaden to the non-oil sector.

Real GDP growth is projected to reach 4.2 percent in 2017/18 and could even rise toward 4.5 percent over the medium-term if financial sector reform takes hold. However, like many other Arab countries, Iran suffers from relatively high unemployment (13 percent), along with high female (21 percent) and youth unemployment (30 percent). Unlike the 2009 protests in Iran, which were led by urban middle class, recent demonstrations have been fueled by discontent in rural areas and small cities; the core constituencies of former president Mahmoud Ahmadinejad, who seeks a political comeback and who reportedly has been arrested for inciting unrest against the government. Last week, General Jafari attributed protests to Ahmadinejad indirectly.

One of the initial catalysts for the recent protests may have been a leak of a proposed government budget, which suggested that substantial funds were going to the military, the Revolutionary Guards, and religious foundations, even as the budget proposed to end cash subsidies for millions of citizens, while increasing fuel prices.

Despite the long path to sustained growth, there are also signs for economic optimism.

Only two weeks before the recent protests, Iran’s media reported that the country would join the Russia-led Eurasian Economic Union (EEU) in early 2018. The region is shifting away from the Brzezinski Doctrine of a U.S.-led Central Asia.

In addition to Russia, the EEU includes Kazakhstan, Belarus, Kyrgyzstan and Armenia. It is meant to guarantee free transit of goods, services, capital and workers among member states. The participation of Iran in the EEU would increase the Union’s population to 260 million and its GDP to close to $1.9 billion - which would make it the world’s eighth largest regional entity, right after India.

Even more important is Iran’s proposed role in the evolving One Road One Belt initiative (OBOR). Through the worst days of the 2010-16 sanctions, major Asian countries remained engaged in Iran’s economy. In the coming years, these countries are likely to support Iran to emerge from the sanctions isolation, to diversify its economy away from oil and gas and to become a major regional trading hub.

Recently, China and South Korea's oil imports have reached or surpassed pre-sanction levels. Iran has regained access to some $115 billion in hard currency held abroad (whose repatriation was restricted by foreign banks to comply with U.S. sanctions). At the same time, China’s share of Iran’s global trade has climbed from 20 percent in 2010 to 31 percent in 2016. Moreover, foreign direct investment in Iran has soared, growing five-fold to 12.2 billion in 2016.

Ironically, these economic advances could be undermined by still new U.S. sanctions and covert activities that seek to reverse the progress of the past half a decade.

After years of diplomacy, the comprehensive nuclear accord (JCPOA, July 2015) offered Iran relief from U.S., UN and multilateral sanctions on energy, financial, shipping, automotive and other sectors. These primary sanctions were lifted after the International Atomic Energy Agency’s (IAEA) certification in January 2016 that Iran had complied with the agreement. Yet, secondary sanctions on firms remained in place, along with sanctions applying to U.S. companies, including banks.

Following the House of Representatives, the Senate unanimously extended the Iran Sanctions Act (ISA) for a decade in late 2016. Despite the Obama sanctions relief, most Democrats reversed their positions surprisingly quickly. In turn, Trump’s policy toward Iran is subject to the administration’s effort to benefit from Saudi economic and geopolitical support.

Last May, Trump signed a $350 billion arms deal with Saudi Arabia; the largest in U.S. history. Afterwards, he began the push to counter Iran’s regional and strategic weapons programs. In October - two months before the Iranian protests - the administration designated for sanctions additional missile and IRGC-related entities, while threatening to cease implementing the JCPOA.

Along with economic pressures, Trump has seized covert operations, even though Western reports have suppressed the role of the highly controversial Michael D’Andrea; the senior CIA officer was named by the New York Times half a year ago. After Trump made the conservative Iran hawk Mike Pompeo the head of the CIA, the abrasive uber-hawk D’Andrea became the head of CIA's Iran operations.

After the 9/11 attacks, the D’Andrea, known as the “Dark Prince” or “Ayatollah Mike" in CIA, was influential in the capture of Osama bin Laden and deeply involved in the detention and interrogation program that was condemned as inhumane and ineffective in the 2014 Senate report. Reportedly, D’Andrea’s operatives, together with the Israeli Mossad, played key role in the 2008 assassination of Hezbollah’s operations chief Imad Mugniyah. He also ramped up the drone program in Pakistan and later in Yemen, with the support of President Obama. Indeed, it is not difficult to see D'Andrea's covert-operation signature in some of Iran's recent events.

By mid-January, Trump must decide whether to recertify Iran’s compliance with the 2015 nuclear deal with world powers (which he decided not to do in October), and whether to waive U.S. nuclear-related sanctions that were suspended under the landmark agreement. If Trump withdraws the U.S. from the JPOA, his administration could revoke waivers, decline to renew waivers, or trigger a provision of the Iran Nuclear Agreement Review Act under which Congress might act on legislation to re-impose sanctions - all of which would penalize Iran’s economy, again.

Ultimately, America's assertive sanctions policy is not just misguided but self-defeating. Since it penalizes rightful compliance, its credibility is crumbling across the Middle East. It is alienating U.S. allies and strengthening U.S. adversaries. It can slow Iran's participation in OBOR initiatives and its reintegration in the world economy but it cannot stop Iran from taking its rightful place in the family of nations.