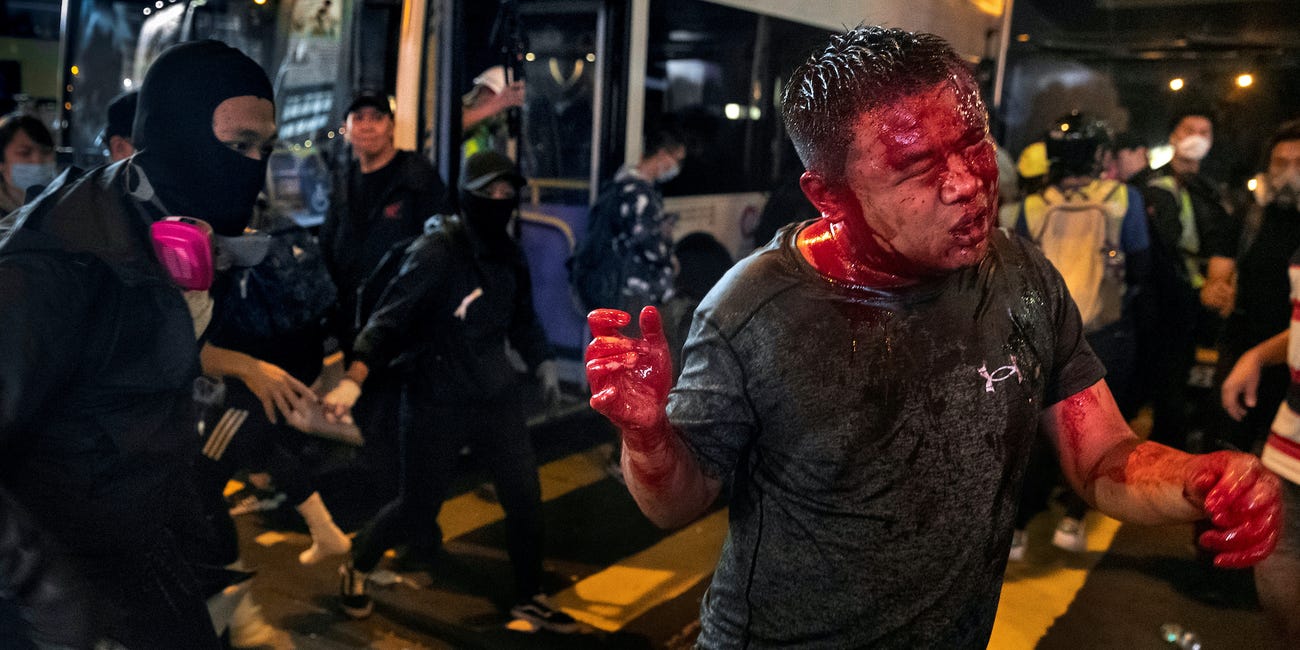 (A masked anti-government protester, wielding a hammer, attacks a man who bystanders suspected of being a pro-Beijing activist from mainland China, during a protest in the Mong Kok area in Hong Kong, China November 11, 2019. Thomas Peter/REUTERS

This photo is the Pulitzer Prize winner of the "Breaking News Photography" category, recording last years' violent protests in Hong Kong. Millions of protesters took to the streets of Hong Kong last year in a so-called "battle for democracy" that turned violent, destructive, and deadly.)

A decision concerning the enforcement of national security in the Hong Kong Special Administrative Region is on the agenda of the 3rd session of the 13th National People’s Congress (NPC), which began on May 22. The effort by the NPC, the country’s highest organ of state power and national legislature, to draft a law to address the national security concerns in Hong Kong has stirred up heated debate in the territory and attracted broad international attention. The decision is expected to be approved and released on May 28.

There has been no lack of agitated, politicized commentary, based on nothing but superficial impressions, in the international community. The moment some people learned that the NPC would consider authorizing its standing committee to draft the legislation, they jumped to the conclusion that it would be aimed at suppressing the rights and freedoms of Hong Kong residents. They immediately assumed that Beijing wants to interfere with Hong Kong’s high degree of autonomy and even that it intends to scrap the principle of “one country, two systems” altogether. Such wild reactions are misleading, and some clarification is needed.

Donald Trump, the president of the United States, said he didn’t know what the legislation was about, because nobody knows, and if there is a law, the U.S. would respond “strongly”.

Indeed, it’s true that nobody knows yet. NPC delegates are reviewing the decision at this point. There is no clarity yet as to how the NPC Standing Committee will proceed with the legislative process. So it might be better to wait and then decide later how to respond after the law is made.

A mouthpiece for the U.S. State Department said that any national security legislation that doesn’t reflect public opinion in Hong Kong will induce a high degree of instability, adding that Hong Kong’s prosperity and stability, respect for human rights and basic freedoms all serve the best interests of Hong Kong, China and the U.S.

Against the backdrop of multiple China-U.S. friction points at the moment, it appears particularly important to objectively and rationally respond to news about Hong Kong and to avoid politicized interpretations and over-reactions. After seeing the content of the NPC decision, and understanding the reasons and purposes behind the central authorities’ move — and considering Hong Kong’s practical needs — observers will likely make more sensible comments.

The decision to take up the matter emphasized first and foremost that China has always unswervingly adhered to the principle of “one country, two systems,” as well as “Hong Kong people governing Hong Kong” and granting the SAR “a high degree of autonomy” while governing Hong Kong in accordance with law.

It then pointed out that China opposes outside forces interfering in Hong Kong affairs, which has been the country’s consistent stance. Hong Kong is a part of China, and its affairs are China’s internal affairs. As an administrative region, the HKSAR has constitutional obligations to preserve China’s national sovereignty, security and unity. Therefore, in order to better preserve national security, the central government needs to establish and improve corresponding institutions. And the SAR government needs to regularly submit reports to the central government and legislate for itself under the Basic Law.

The decision under consideration didn’t say exactly how organs charged with guarding national security would be organized in Hong Kong or how the NPC Standing Committee would propose related law — meaning that the answers to those questions will be determined later. But one thing is beyond doubt: No law enacted and implemented in Hong Kong should contradict the Basic Law, and any organization operating in Hong Kong must abide by the SAR’s local laws.

Let’s take a look at the reasons the NPC must review such a decision. Many people will immediately associate this with last year’s turmoil in Hong Kong, which arose from an ordinance amendment. That turmoil was no doubt a direct catalyst.

Numerous incidents of violence and sabotage occurred during the turmoil, some with obvious terrorist characteristics. Legal order in Hong Kong was undermined, society was torn apart and some foreign forces have taken advantage of the opportunity to create chaos in Hong Kong. They intend to make trouble for the central government, leading to strong feelings that it’s now imperative to act to preserve national sovereignty, security and development interests in Hong Kong.

The central government wouldn’t be so worried had Hong Kong already had national security laws in place. In truth, over the past 17 years since the SAR shelved legislation under Article 23 of the Basic Law in 2003, there has been no indication that the loophole would be plugged. In other words, there is a legal vacuum that persists 23 years after Hong Kong’s return to Chinese jurisdiction.

For the SAR government, practicing “one country, two systems” must track with the rule of law. The constitutional obligation prescribed in the Basic Law, such as making local laws in accordance with Article 23, must be fulfilled as soon as possible.

The legislation the NPC delegates are expected to authorize its standing committee to make this time is to be complementary to existing laws in the SAR. After all, foreign affairs, national defense and matters related to national sovereignty fall within the jurisdiction of the central government, just as in the U.S., federal and state governments have different responsibilities and powers. Only when the central and SAR governments cooperate in fulfilling their respective duties can the “one country, two systems” apparatus run smoothly.