Xi Struggling to Keep the PLA in Line? 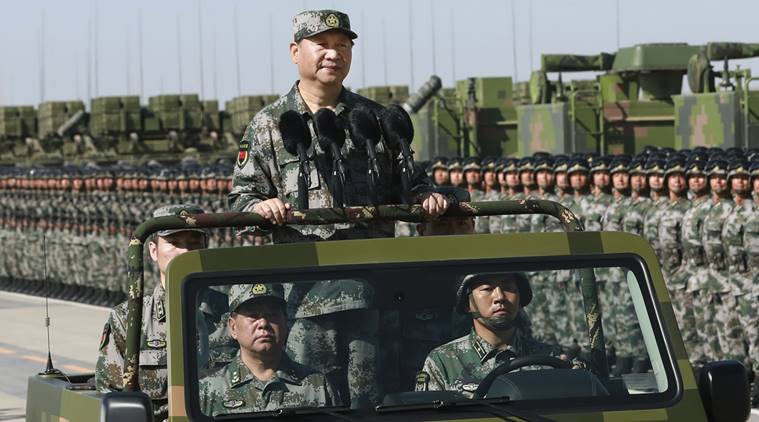 Chinese President Xi Jinping stands on a military jeep as he inspects troops of the People’s Liberation Army during a military parade to commemorate the 90th anniversary of the founding of the PLA at Zhurihe training base in north China’s Inner Mongolia Autonomous Region, Sunday, July 30, 2017.  (Li Gang/Xinhua)

Seeking to emerge as China’s most powerful leader since Mao Zedong, President Xi Jinping has stepped up his domestic political machinations in the run-up to the critical 19th national congress of the Communist Party. But the combination of his firing of the country’s topmost general and other military leadership changes suggests that he could still be struggling to keep the People’s Liberation Army (PLA) in line.

China’s secretive and opaque political system makes it hard to get a clear picture. Yet Xi’s continuing purges of generals and admirals and other actions underscore, at a minimum, the troublesome civil-military relations in the country.

Take, for instance, the recent troop standoff with India that raised the specter of a Himalayan war, during which China threatened reprisals if New Delhi did not unconditionally withdraw its forces from a small Bhutanese plateau, which Beijing has claimed as Chinese territory “since ancient times.” After 10 weeks, the face-off on the Doklam Plateau ended dramatically with both sides pulling back troops and equipment from the site, signaling that Beijing, not New Delhi, had blinked.

The mutual-withdrawal deal was struck just after Xi replaced the chief of the PLA’s Joint Staff Department, a position equivalent to the chairman of the U.S. Joint Chiefs of Staff. The mutual pullbacks suggested that the removed chief, General Fang Fenghui, who has since been detained for alleged corruption, was an obstacle to clinching a deal with India.

To be sure, this was not the first time that PLA’s belligerent actions in the Himalayas imposed diplomatic costs on China. Another example occurred when Xi reached India on a state visit in September 2014. He arrived on Indian Prime Minister Narendra Modi’s birthday with a strange gift for his host — a predawn Chinese military encroachment deep into India’s northern region of Ladakh. The encroachment, the most substantial of its kind in many years in terms of the number of intruding troops, overshadowed Xi’s visit.

It appeared bizarre to many observers that the military of an important power would seek to mar the visit of its own head of state to a key neighboring country. Yet Chinese Premier Li Keqiang’s earlier visit to New Delhi in 2013 was similarly preceded by a PLA incursion into another part of Ladakh that lasted three weeks.

Such provocations might suggest that they are intentional, with the Chinese government in the know, thus reflecting a preference for blending soft and hard tactics. But it is also possible that the provocations — at least their timing and duration —are indicative of the continuing “disconnect between the military and the civilian leadership” in China that then U.S. Defense Secretary Robert Gates warned about in 2011.

During his 2014 India trip, Xi appeared embarrassed by the accompanying PLA encroachment and assured Modi that he would sort it out upon returning home.

Soon thereafter, the Chinese defense ministry quoted Xi as telling PLA commanders in a closed-door meeting that “all PLA forces should follow the president’s instructions” and that the military must display “absolute loyalty and firm faith in the Party.” Recently, in an address held at a parade marking the 90th anniversary of the PLA’s August 1, 1927, creation, Xi conveyed that same message yet again. Donning military fatigues, Xi exhorted members of his 2.3-million-strong armed forces to “unswervingly follow the absolute leadership of the party.”

Had civilian control of the PLA been working well, would Xi repeatedly be demanding “absolute loyalty” from the military or asking it to “follow his instructions”?

China does not have a national army; rather the party has an army. So the PLA has traditionally sworn fealty to the party, not the nation.

Under Xi’s two immediate predecessors, Hu Jintao and Jiang Zemin, the PLA gradually became stronger at the expense of the party. Xi, however, has been troubled by the military’s rising clout, as he believes that it is hampering his own larger ambitions.

Therefore, as part of his effort to reassert party control over the military, Xi has used his anti-corruption campaign to ensnare a number of top PLA officers, including General Guo Boxiong, who was sentenced to life in prison last year. Xi’s sweeping military overhaul includes a new command-and-control structure.

But just as a dog’s tail cannot be straightened, asserting full civil control over a politically ascendant PLA is proving unachievable. After all, the party is ideologically bankrupt, morally adrift, and largely dependent on the PLA to ensure domestic order and sustain its own political monopoly.

The regime’s legitimacy increasingly relies on an appeal to nationalism. But the PLA, with its soaring budgets and expanding role in safeguarding China’s overseas interests, sees itself as the ultimate arbiter of nationalism.

To make matters worse, in his ruthless effort to concentrate power in himself, Xi has made many enemies at home, including through corruption purges. It is not known whether the PLA’s upper echelon respects him to the extent that they are willing to fully abide by his instructions.

In many ways, it appears as though the PLA’s growing power is actually redolent of what happened in Imperial Japan, which rose dramatically as a world power in one generation following the 1868 Meiji Restoration. Boosted by war victories, the Japanese military acquired political influence and gradually went on to dictate terms to the civilian government, with tragic consequences for Japan and the region.

In the past decade, the PLA’s increasing clout has led China to stake out a more muscular role. This includes resurrecting territorial and maritime disputes, asserting new sovereignty claims, and using construction activity to change the status quo.

As such, China’s cut-throat internal politics and troubled civil-military relations clearly have a bearing on its external policy. The risks of China’s rise as a praetorian state are real and carry major implications for international security.

China MilitaryXi JinpingSecurity
printTweet
You might also like
Back to Top
CHINA US Focus 2018 China-United States Exchange Foundation. All rights reserved. Disclaimer