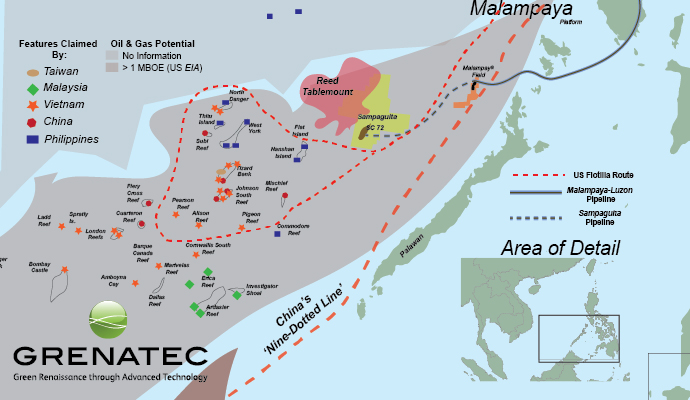 A U.S. Navy flotilla tour of the South China could underscore Reed Bank’s potential to provide a solution to territorial tension through Joint Development Areas. If U.S. navy ships traverse the South China Sea to demonstrate freedom of navigation, what route might they take?

One route could be a broad arc passing near Reed Bank as well as Subi and Mischief reefs. This would set down an important precedent in the most contentious areas of the South China Sea. It would also demonstrate China’s diplomatic isolation as the only nation likely to protest.

China claims virtually the entire South China Sea as ‘indisputable’ Chinese territory. China says it plans to ignore any international rulings that decide otherwise. The U.S., along with all the South China Sea’s other littoral nations, reject China’s position.

The result of this disagreement between China and her neighbors has been testy encounters at sea — particularly between China, the Philippines and Vietnam. China’s construction of military facilities on Subi, Mischief, and Fiery Cross reefs (among others) increasingly the neighboring nations.

In mid-May, the Chinese navy ordered a U.S. military reconnaissance flight away from Chinese claimed islands. The U.S. ignored the order — claiming its flight path was in international airspace. The U.S. may now underscore the point by sending U.S. navy ships through the South China Sea to emphasize the principle of free maritime navigation.

If the U.S. does so, the disputed Reed Bank — claimed by both China and the Philippines —is an excellent first stop on the tour. Reed Bank contains the South China Sea’s most promising as-yet undeveloped oil and gas fields.

China and the Philippines already have engaged in dangerous skirmishes at Reed Bank as both conduct hydrographic research to better estimate the energy resource. This lifts the veil of principled subterfuge by all sides in the South China Sea. It shows the real issue lurking underneath.
South China Sea territorial claims — at least in Reed Bank — is really about energy.

If all sides recast dangerous nationalistic posturing to more hardheaded economic calculation, it opens the way for more rational, mutual gain negotiations. These could center upon joint development of South China Sea resources; it could be an alternative to war.

Philippine-listed energy exploration company Philex Petroleum Corp. has engaged in on-and-off talks for years now with China National Offshore Oil Company (CNOOC) on joint exploration and development of Reed Bank. The specific focus has been on Service Contract 72 (SC72), located in the Sampaguita Field in the southern part of Reed Bank.

These stalled Philex-CNOOC talks suggest political interference by one or both sides. Should China and the Philippines negotiate seriously, the specifics of a deal are easy to imagine.

Joint exploration and development of Sampaguita’s SC72 could yield natural gas supplies that could be pumped to Luzon through extending the existing gas pipeline serving the mature Malampaya pipeline just to Sampaguita’s northeast.

Needed investment in jointly developing SC72 could be funded by loans from the China-based Asian Infrastructure Investment Bank (AIIB), of which the Philippines is a founding member.

CNOOC could share in the proceeds of Philippine domestic sales of natural gas from Sampaguita. Joint development also would enable CNOOC to demonstrate a cooperative working relationship with a Philippine counterparty in the natural gas industry.

That Philippine contract has provided major demonstration for State Grid. It almost certainly contributed to State Grid’s subsequent successful entries into other overseas markets such Australia, Italy, and Brazil.

Keeping this civilian infrastructure workforce employed is now critically important for China. It presents the classic ‘bicycle dilemma’ — keep peddling or fall off. Viewed this way, China’s AIIB-funded overseas infrastructure investment can be seen as a sign of Chinese mercantile weakness than economic strength.

If countries come to mistrust China, it will immensely complicate efforts of State Grid, CNOOC and other Chinese state champions to win overseas infrastructure projects. Should this occur, layoffs may follow. This may strain China’s brittle internal social contract of higher living standards in return for stifled civil society.

A U.S. navy flotilla tour of the South China Sea may demonstrate to China that the ‘going out’ strategy of its world-class economic infrastructure industry may now be at risk from her South China Sea territorial claims.

Creating Joint Development Zones in the South China Sea finesses this problem. It kicks territorial finality down the road to a time when the stakes are lower because the energy resources have been developed. It also shows flexibility and a willingness to compromise. This raises trust.

Reed Bank offers such a potential outcome. It provides CNOOC, Philex and SC72 a chance to ‘get it right.’

A U.S. flotilla tour could provide the opportunity to demonstrate the potential.