A Tale of Two Cities: Singapore and Hanoi 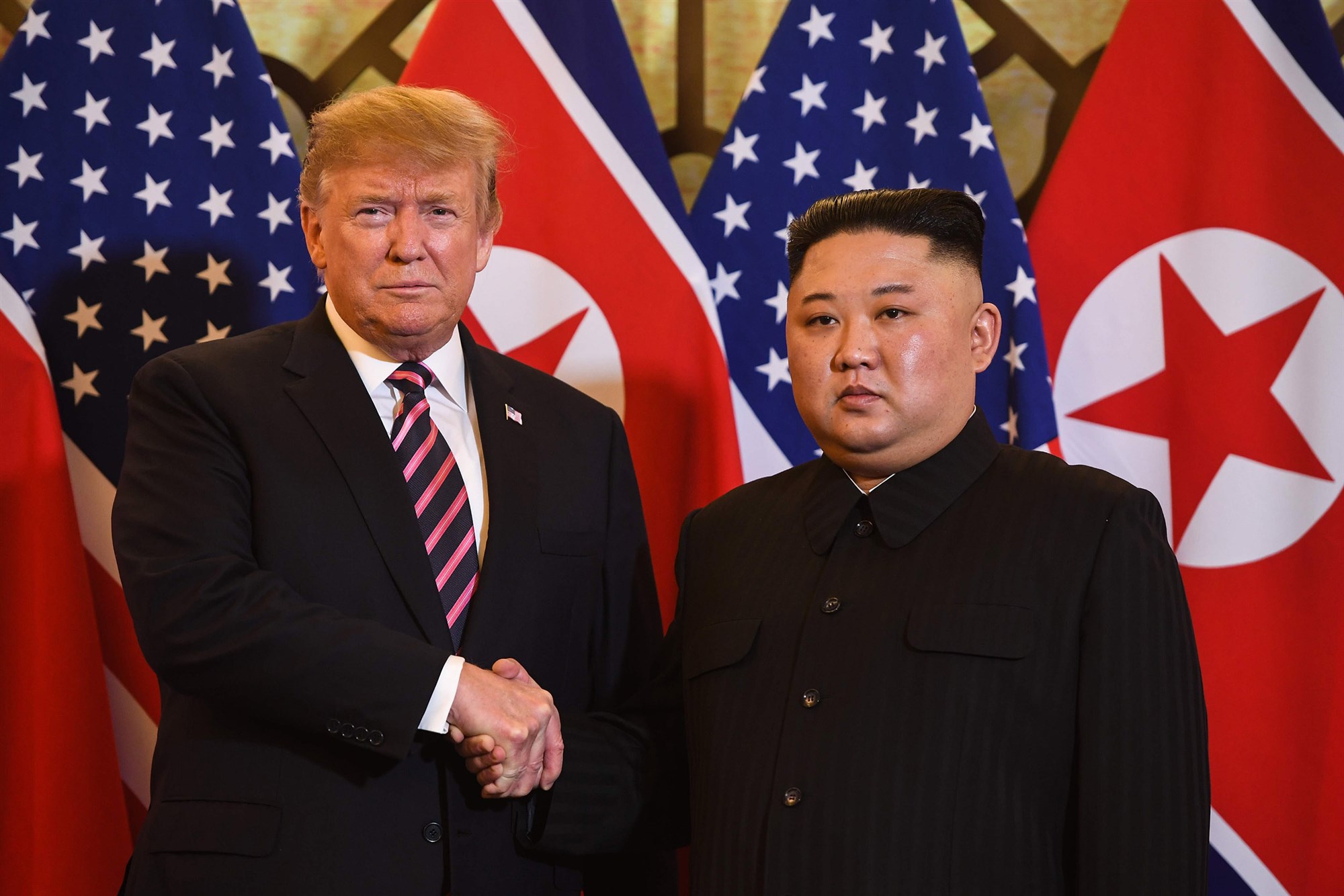 President Donald Trump travels to Vietnam next week for his second summit with Chairman Kim. Trump believes he enters the meeting having achieved a number of milestones in his “historic push for peace on the Korean Peninsula.” He points to a halt in North Korean nuclear and missile tests, the release of US hostages, and the return of the remains from US soldiers killed during the Korean War as historic successes.

However, Trump’s view of developments ignores his failure to advance the core issue of denuclearization. The outcomes of the Singapore summit and developments since contrast sharply with the original objectives set out by the administration to achieve complete, verifiable, and irreversible denuclearization in a rapid manner. The dismantlement of North Korea’s nuclear program, not the management of it, is the priority for the U.S.

For Trump to understand this, he only needs to compare U.S. strategic positioning before the Singapore summit and today. In the half a year since Singapore, U.S.-China cooperation is fading, North Korean nuclear proliferation continues unimpeded; and Washington’s relations with its key ally Seoul are beginning to strain. Instead, developments since Singapore align more closely with Beijing’s interests and objectives. Beijing has enhanced its influence in the ongoing negotiations; seen its proposed policy of “suspension for suspension” realized; and benefited from actions and statements by Trump that have undermined critical U.S. alliances and credibility.

Trump enters Hanoi in a worse off position than when he arrived in Singapore last June. He should reflect on the developments since to avoid making the same mistakes and ensure that this time he leaves Vietnam having advanced the interests and objectives of the U.S. and its allies.

A Warming in China-North Korea Relations

Trump’s announcement in March of last year that he would meet with Kim surprised policymakers in Beijing. Strong U.S.-China cooperation on sanctions implementation and enforcement came to a halt as Beijing shifted tact to shore up relations with Pyongyang in preparation for the negotiations to come.

Ties between Pyongyang and Beijing had significantly deteriorated prior to the announcement of the first Trump-Kim summit. Despite Xi and Kim having been in office for over half a decade, neither leader had ever met in person. Over the course of 2017, Pyongyang exacerbated tensions by conducting a number of missile and nuclear tests that coincided with important Chinese international events. As relations between Kim and Xi soured, U.S.-China cooperation strengthened. Washington and Beijing agreed on the need to ramp up economic pressure to an unprecedented level. China implemented a number of rigorous sanctions in accordance with a series of United Nations Security Resolutions. China’s agreement in December of 2017 to severely limit oil exports represented a major shift from past willingness to clamp down on Pyongyang’s access to desperately needed fuel.

However, the announcement by Trump that he would meet with Kim caught Beijing completely off guard. The Chinese leadership, fearful of having no influence in upcoming negotiations, shifted their focus away from cooperation with the U.S. on the pressure campaign and toward quickly fixing relations with North Korea. Xi and Kim met less than a month after the surprise announcement and Beijing took steps to reassert their influence with Pyongyang.

Since China’s cooperation with the U.S. in enforcing sanctions and willingness to enact new ones has faded, within hours of the conclusion of the Singapore Summit, China’s Foreign Ministry brought up the possibility of easing UN sanctions – a position that they have repeated multiple times since. The maximum pressure campaign represented a key area of cooperation between Beijing and Washington. Today, agreement on the need for continued vigorous sanctions has fragmented and cooperation diminished.

While coordination with the U.S. has faltered, China has seen its growing influence on North Korea and as well as on the negotiations. Meetings between Xi and Kim ahead of or following major diplomatic engagements are now a regular fixture. While the two leaders remain distrustful of each other, they are in agreement over the mutual benefits of a closer relationship. Xi feels China’s interests are being protected and even advanced while Kim has established a hedge against a breakdown in negotiations with the US and an opportunity to play differing U.S. and Chinese interests to his advantage.

Joint Statement of President Trump and Chairman Kim at the Singapore Summit committed the U.S. and North Korea to “work toward the complete denuclearization of the Korean Peninsula,” but did not indicate a specific timeline or roadmap on how denuclearization might be achieved and limited the potential for future progress on the U.S. priority of denuclearization. Instead, the key diplomatic outcome was a “suspension-for-suspension” framework Beijing has long advocated for.

In May 2017, Chinese Foreign Minister Wang Yi described the relationship between Washington and Pyongyang like “two accelerating trains coming towards each other with neither side willing to give way.” To “flash the red light” and put the “brakes on both trains”, he proposed a “suspension for suspension” solution. Pyongyang would suspend its missile and nuclear activities, Washington would stop joint-military exercises with Seoul, and the two sides would return to the negotiating table.

The United States has vehemently pushed back on the dual suspension solution in the past for good reason. A freeze for freeze equates reckless North Korean actions to develop its nuclear program with legitimate precautionary measures taken by the U.S. and its allies to defend themselves. As U.S. experts pointed out, from Washington’s perspective there are not “two accelerating trains,” just one: North Korea. It also does not adequately address the key issue of denuclearization. As revelations since Singapore show, Kim continues to stockpile nuclear material and missiles. Pyongyang is also taking steps to conceal the details of its nuclear program and prevent outside observers from knowing its full extent. Trump’s tweet immediately following his meeting with Kim that “there is no longer a Nuclear Threat from North Korea,” has not stood up to the test of time.

Chinese policymakers, however, are pleased to see their suspension for suspension proposal implemented. Kim no longer speaks of the nuclear button on his desk and Trump doesn’t threaten “fire and fury”. Outright conflict or stringent sanctions that might lead to a collapse of the North Korean regime raise concerns in China over the potential for a refugee crisis or the need to intervene quickly on the Korean Peninsula to prevent nuclear proliferation to rogue actors. In Beijing’s worst case scenarios, a collapse might even lead to the presence of US troops on its border. Alarm over the possibility of any of the above led to a fierce debate in Beijing over its North Korea policy and domestic concerns in regions bordering the North. Trump’s willingness to go along with a de-facto dual-suspension agreement has stabilized the situation in Beijing’s eyes and quelled domestic anxieties in China about the consequences of a conflict. It has done less to advance important objectives of the U.S. and our allies.

A Divide between Washington and Seoul

In addition to failing to make progress on denuclearization, the outcomes of the Singapore Summit undermined U.S. strategic cooperation with South Korea. In Trump’s press conference immediately following the Singapore summit, he announced the suspension of U.S.-South Korea joint-military exercises without first consulting Seoul. Coordination and cooperation between Washington and Seoul are critical. Trump’s agreement to suspend mutually agreed upon exercises without first getting Seoul’s buy-in injected uncertainty into the credibility of U.S. security commitments that account for both U.S. and South Korean interests. In recent months, this rift has been exacerbated as Washington has pushed back on Seoul’s urgency to move forward with diplomacy and economic investment in North Korea, insisting that sanctions will not be eased until Pyongyang denuclearizes.

As Seoul and Washington’s interests diverge, however, Beijing has once again seen its own strategic aims advanced. In his press conference, Trump went on to call US military exercises “war games” and labeled them “provocative.” This language is often used by Beijing and Pyongyang to delegitimize the defensive nature of them and exaggerate their threat.

He also announced that he wanted to “bring our [U.S.] soldiers back home.” Beijing has long desired a reduced U.S. military presence on the Korean Peninsula and in Asia more broadly. Their presence is viewed as an attempt to contain China, rather than as a legitimate defense against North Korea. Difficulties in negotiations between Seoul and Washington over a new Special Measures Agreement since (a stopgap deal was only recently agreed to) have further exposed the potential for a reduced U.S. troop presence. Beijing and Seoul suffered a near-complete breakdown in relations over the THAAD anti-ballistic missile defense system dispute two years ago. Yet today, they are increasingly aligned on issues such as sanction relief.

Getting Back on Track in Hanoi

Obvious as it may seem, if Trump wants to walk away from Hanoi in a position of strength, he needs to ensure the outcomes of the summit align with the interests of the United States and its allies, and not just Beijing. Critical to this is for him to refocus U.S. priorities on the high bar for the success he initially set for negotiations with Kim in Singapore: a clear commitment to comprehensive, verifiable, irreversible, denuclearization in a rapid manner.

To achieve this, he should focus on getting what Special Representative for North Korea Stephen Beigun recently labeled “concrete deliverables.” This includes a complete inventory of North Korea’s nuclear facilities and stockpiles. It should also include a verification method that ensures the validity of North Korean claims and consequences if found untrue. He should ensure that he uses his discussions with Kim to empower those below him to carry out his mandate in the difficult negotiations that will follow. Such an approach can prevent a repeat of cases such as the Tongchang-ri missile testing facility and Punggye-ri nuclear site last year. Kim points to the dismantling of both of these sites as illustrating his commitment to denuclearization but will not allow international inspectors to verify their complete destruction.

Any Hanoi agreement with North Korea also cannot come at the cost of US alliances with South Korea and Japan. Neither Seoul nor Tokyo should be surprised by the outcomes of the summit as was the case last June. Each has differing priorities and threat perceptions. Keeping the interests of the US, South Korea, and Japan aligned will be difficult. For this reason, the complexity of ongoing diplomacy requires frequent engagement and transparency. It will be necessary to ensure the long-term success of any deal. The alternative is a scenario in which the US is increasingly isolated from its allies and partners.

Speaking at the Munich Security Conference about the Hanoi summit, Vice President Pence said, “our allies may be assured: We will not repeat the mistakes of the past.” We should hope that this statement includes blunders made in Singapore. Trump should be realistic about what is feasible entering Hanoi; at the same time, he must be determined to prevent an outcome like that of Singapore. He cannot cede more than is needed and should seek an agreement that sees all parties succeed rather than just some. A peace declaration, an end to the Korean War, and a loosening of sanctions are top priorities for Kim entering the summit. An agreement by Trump to any of these without reciprocal, concrete, verifiable concessions will again impede actual progress toward denuclearization, rather than advance it.

This article was originally published in The Geopolitics  on Monday, 25 February, 2019.

Trump-Kim MeetingKorean PeninsulaPeace TalksDenuclearizationNorth Korea
printTweet
You might also like
Back to Top
CHINA US Focus 2022 China-United States Exchange Foundation. All rights reserved.