America’s Trade Deficit with China Is Due to Market Forces, Not Unfair Competition 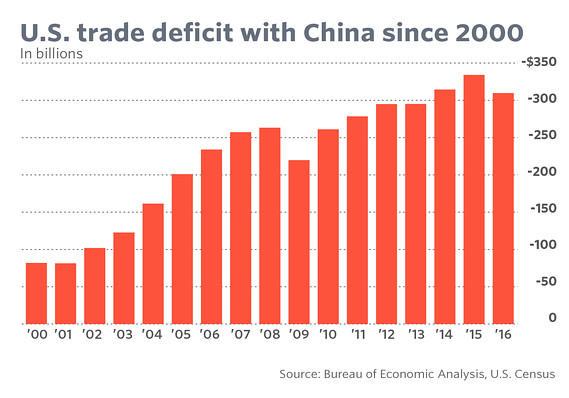 America’s trade deficit with China has been an ongoing source of tension between the two countries, and has become an even hotter topic since Donald Trump became President. During his campaign, Trump vowed to impose punitive tariffs of up to 45% on Chinese goods.

On the 1st of August, Trump announced that his administration would launch broad investigations against China, under s 301 of the US Trade Act, and would impose high tariffs on certain products from China. It seems a trade war is imminent.

But why is there this trade imbalance?

According to US statistics, America’s trade deficit with China in 2016 amounted to $347 billion, or 47% of its total deficit in merchandise trade. Looking at these figures, it seems natural for the Trump administration to feel unhappy.

But these figures don’t capture the full picture. Using Chinese statistics, the trade deficit is actually much smaller.

First, in the American figures, exports to the US from Hong Kong are also included. But this is unreasonable, because not all exports via Hong Kong, the largest free port in the world, are originally from the Chinese mainland.

Second, whilst the US has a trade deficit with China in goods, it enjoys a trade surplus in services. Of course, compared with goods, the value of the trade in services is small. But its share is set to increase. As one of the early harvests of the 100-day trade action plan between the two nations, China will open its services sector wider to American companies.

Although China has a huge trade surplus, it is still at the low end of the global value chain. For example, for manufacturing an iPod which is exported to and sold in the US at $209, the Chinese side only earns $9. However, when the US compiles its trade with China, it records the value of the iPod as a $209 export from China.

Therefore, the trade deficit is due to the division of labor in the global value chain, the difference in the countries’ industrial structures, and market competition. The US is at the top of the global value chain and enjoys a leading position in product design, research, and development. Due to its high labor costs, the US doesn’t have any comparative advantage in manufacturing.

Or, in other words, the American trade deficit in goods (and its surplus in services) with China is the natural result of the different economic structures of the two nations.

If the root causes of the trade deficit are understood, President Trump should have no cause to be angry and upset.

How, then, to deal with this issue? There are two options: dialogue or trade war. If the US stubbornly acts in violation of the trends of globalization and trade liberalization and unilaterally uses s 301 against China, it would shoot itself in the foot.

There are three reasons for this. First, if America imposes high tariffs on some of Chinese goods, it would decrease Chinese exports to the US. But this may not benefit American companies. The US would then have to import from other countries, like Indonesia and Mexico, because American companies do not have any comparative advantage in producing and supplying these products.

And if the US wages a trade war against China, it would be the ordinary Americans who suffer. The book – A Year Without “Made in China” – tells the story of an American family vowing not to buy any made-in-China products for a whole year, but it turned out to be unsustainable. If they didn’t buy a pair of made-in-China slippers at $2, they would have to pay six or seven times more for a pair from South Korea. They found that their living costs became too high to bear.

If the US launches investigations against China under s 301, this would be using its domestic laws over international laws and practices in settling international trade issues. Under the World Trade Organization rules, China would have the right to file a complaint against the US to the WTO Dispute Settlement Body, which would be obliged to make a final ruling within one and half years. If it rules in favor of China, it would then be for China to legitimately impose anti-dumping and anti-subsidy duties on US exports to China, particularly agricultural products with which the US has huge trade surpluses. Neither side would benefit from this.

Dialogue, not trade wars, should be the way forward. During the period of the 100-day trade action plan, China lowered market access standards for US companies in several sectors, and increased imports from the US as an act of good faith. The US side should respond in kind. To reduce the trade deficit, the US should work to improve the competitiveness of its products in the global market and lift restrictions on exports of high-tech products to China. The best way to reduce the trade deficit is to increase its exports to China, not to cut down its imports from China.

The logic is simple, and Trump as a smart businessman should have no problem understanding it.