The rapidly swelling local government debt in China over the past few years are seen by many as a trigger to a credit bubble, or even full-blown financial crisis. China’s local government debt to GDP ratio expanded to 31.5% by June 2013, according to the National Audit Office, and continued to climb to 33.8% by 2014, according to our estimates. Over 50% of new borrowings have been used for repayments since 2014, signaling significant repayment pressure. 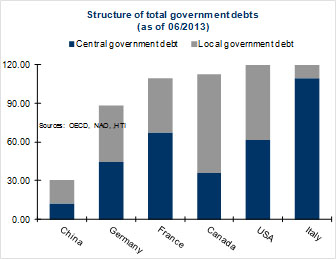 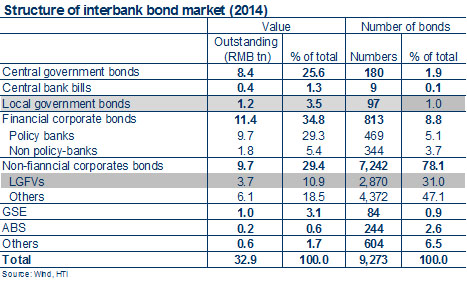 Budget reform, the first critical reform among over 330 reform proposals of Xi administration, has kicked off, laying the foundation for a more balanced and transparent government budget and financing structure. New Budget Law, regarded as “Economic Constitution”, was approved on August 31 of 2014 and launched on January 1 of 2015, after a decade of amendments and negotiations. The debt issue was also a focus on the recent Two Sessions for March 3-15 of 2015. Lou, Minister of Finance, summarized the key solution to local government debts as “opening the front gate and closing the back door.” In other words, the central government is to leave more flexibility for local governments including municipal bond issuance, while closing other non-transparent channels such as Local Government Financing Vehicles (LGFVs) and bank loans.

Lou also stated that a RMB 600 bn quota was approved for new bond issuance including RMB 500 bn general bonds and RMB 100 bn special bonds in 2015; a swap plan of RMB 3 tn in total was announced to roll over existing LGFVs, 1 tn of which has been allocated to local governments by the MoF based on their maturing outstanding debts and affordability. The plan includes issuance of low-cost long-term local government bonds, whose proceeds are used to repay high-interest short-term bank loans, local investment bonds and trusts. According to the MoF, the swap plan can reduce annual interest payments by RMB 40-50 bn, largely easing local governments’ repayment pressure.

The short-term crunch could be partly alleviated via the debt swap plan and new municipal bond issuance, but there remains a long way to achieve the spirit of the new Budget Law. Related financial, fiscal and legal reforms are required to improve the fiscal position of local governments fundamentally. Short term measures include:

Solutions for a longer term are required for a more sustainable and transparent government financing structure. Major measures include as follows: