Central Asian Bazaars as A Soft Power of Beijing 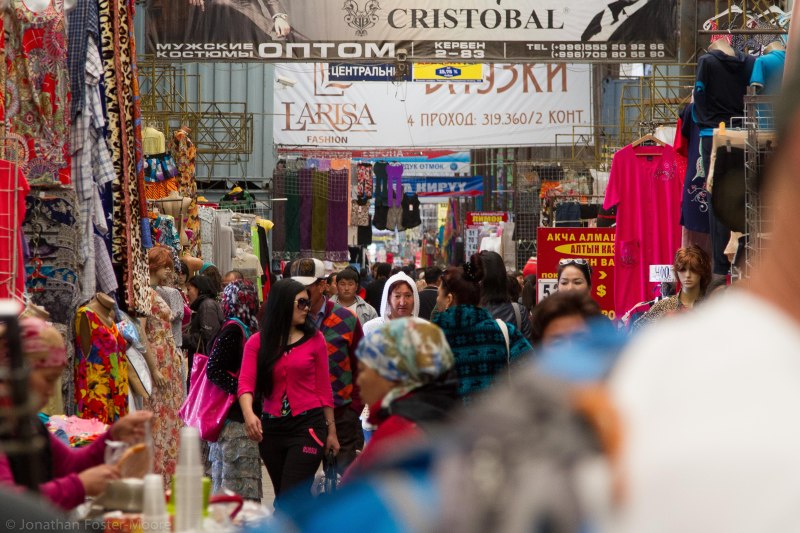 Dor Doi is the floodgate through which China is able to proliferate its many, many products to Uzbekistan, Kazakhstan, and Russia. (Photo: Jonathan Foster-Moore)

Dordoi Bazaar is one of the largest re-export markets in Central Asia that serves as the entrepôt for the Chinese goods to be sold to Russia, Kazakhstan and Uzbekistan. Located in Bishkek, Kyrgyzstan, Dordoi employs nearly 100,000 people, while its annual turnover reaches several billion dollars. There is no exact data on its real turnover, because such markets are usually run non-transparently, which, in turn, further contributes to the strengthening of shadow economy of Central Asia. Nonetheless, in a period of 23 years, Dordoi grew from a small market on the outskirts of Bishkek to a city of its own with its own infrastructure, residential and recreational areas, and private security.

Yet, Dordoi can hardly be characterized as a comfortable market place akin to those found in Beijing or Dubai. Cheap prices are the main factor behind the success of the gigantic flea market. All goods, predominantly of the Chinese origin, are stored and sold in double-stacked shipping containers spread across 100 hectares of land. Nearly 10,000 containers are open for sale 364 days a year, except for January 1. The World Bank estimates that only the lease or lease-equivalent income of owners from these outlets reaches $540 million per year. Dordoi is the largest, but not the only wholesale and retail market in Central Asia. There are several hub-type markets in the region such as Barakholka in Almaty, Kazakhstan, Karasuu in Kyrgyzstan, and Korvon in Dushanbe, Tajikistan. There are a few smaller scale regional bazaars and a plethora of local bazaars in each country.

On one hand, such developments demonstrate that bazaars emerged as important elements of the Central Asian market economies. As Roman Mogilevskii (2012) advised, informal imports and re-exports of mostly light industry products from China became important for both economic and social development of the post-Soviet Central Asian states. Informal trade lowers consumer prices, allows poorer segments of the population to access cheaper goods, contributes to the state budget revenues, and increases employment opportunities for the vulnerable layers of the society such as youth and women.

On the other hand, the presence of such large bazaars and hordes of traders from and to China demonstrate that the Chinese leverage over the Central Asian states has grown significantly. Although the concept of soft power or the ability to shape the preferences of others has been introduced by Joseph Nye of Harvard University, such thinking is similar to the philosophy of ancient Chinese philosopher Lao Tzu who taught that water wears away rocks because water is both soft and strong.

Accordingly, as an aspiring global power and a world leader, China is aware that soft power matters. Beijing is willing to invest billions of dollars not only in the economic and infrastructure projects, but also in other spheres such as education and research. In this regard, all those engaged in trade at the Central Asian bazaars can be utilized to advance Chinese interests in the region. Bazaars feed a large cohort of people ranging from traders and service staff to state officials and criminals. As a result, these groups of people may emerge as important actors that can shape both domestic and foreign policy of the state. At this stage, many Central Asian businessmen admire Chinese economic development and prefer doing business with the Chinese; however, their political views of China are predominantly of fear and caution. This situation demonstrates that Beijing still has much work to do in order to improve its public image and shorten its soft power deficit in the Central Asian region. Taking into account the potential and ambitions of Beijing, it looks like these prospects are simply a matter of time.