One Belt, One Road: A New Source of Rent for Ruling Elites in Central Asia?

Last week one of the Big Three credit rating agencies, Moody’s, issued a vote of confidence to Beijing’s One Belt, One Road initiative. Moody’s reported that the Chinese initiative to enhance economic integration with more than 40 countries across Asia, Europe and the Middle East is “credit positive” for the emerging market sovereigns involved. Indeed, it is assumed that One Belt, One Road Strategy will have a cathartic effect on China’s impoverished neighbors, although for Beijing, the Silk Road Economic Belt and Maritime Silk Road embody a solution on how to simultaneously advance its political goals and counteract the country’s economic slowdown. 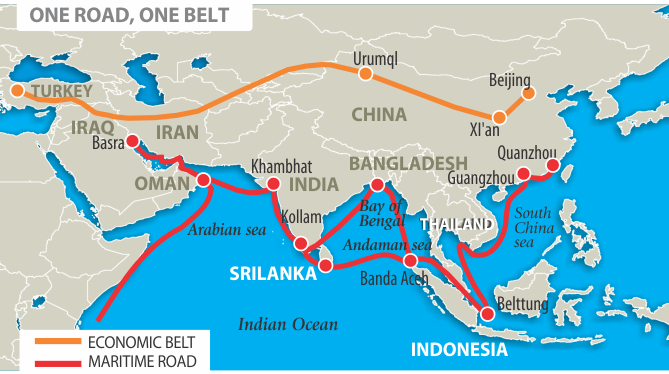 Moody’s predicts that the Silk Road Economic Belt will benefit predominately smaller states with underdeveloped economies, low investment rates, and low per-capita incomes. In particular, Moody’s expects Central Asia to experience a boost in bilateral trade flows, and be amongst the greatest beneficiaries of infrastructure development. However, there are still a great many questions to explore and challenges to overcome in order for the New Silk Road to be comparable to the Ancient Silk Road in terms of importance and impact magnitude.

Political risks are amongst those challenges, since many participating states, including those in Central Asia, face political and institutional difficulties. A majority of post-Soviet states struggle to enforce good governance and curb corruption. Abuse of public offices for private gains along with non-transparent, ineffective, and inefficient state institutions is a widely prevalent phenomenon in the region. In this context, Beijing will have to pragmatically assess both internal and external constrains for the  successful implementation of the One Belt, One Road project before dispersing a vast amount of resources into the creation of a substantial network of infrastructure. Yet, it appears that Chinese president Xi Jinping expects immediate actions and quick returns, despite concerns that such a rush may lead to significant repercussions both for the regional project, and for participating member-states.

Central Asia is the region predominantly characterized by corrupt, autocratic, family, or clan-based governance, where the perennial dilemma of the ruling regimes becomes the goal of achieving short-term regime security at the expense of long-term state-building objectives. Thus, Chinese investments may emerge as a source of rent for the ruling elites in the region, and alarming signals are already present. In 2010, Tajikistan opened the Dushanbe-Chanak highway, which connects the capital of Tajikistan to Uzbekistan through the northern province of Sughd. This highway was upgraded by the Chinese companies and paid for with a multi-million dollar loan from Beijing. However, what was seen as an investment into Tajik infrastructure appeared to be another source of rent for the Tajik ruling elites. The Dushanbe-Chanak highway soon transformed into the toll road run by Innovative Road Solutions, a company registered in the British Virgin Islands, which had no public record of running highway projects, but which was exempt from a number of different taxes in Tajikistan. Local media reported that allegedly, Innovative Road Solutions belonged to son-in-law of Tajik president Jamoliddin Nuraliev, who denied those accusations.

Nonetheless, the existence of such discourses demonstrates that rent-seeking schemes constitute an important part of political processes in Central Asia. Ruling elites in Central Asia are infamously experienced at capturing the state and influencing distributional outcomes of the governments for the purposes of self-enrichment. As the developments around the American air base Manas in Bishkek exposed, ruling elites in Kyrgyzstan were willing to play off greater players such as Russia and the USA in order to protect their own rent-seeking interests. Accordingly, there are no guarantees that such trends will be absent in the Chinese-Central Asian relations within the framework of One Belt, One Road initiative.

Although One Belt, One Road is hailed as one of the grandest flagship projects of Beijing, it may have a bumpy start in Central Asia. Corruption scandals may overshadow laudable development achievements, whilst the new Silk Road may emerge as the Golden Road for kleptocratic governments and rent-seeking elites. Moreover, unprecedented influx of funding into poor Central Asian republics can exacerbate political instability in those states, since distribution of Chinese rents may become a cause of fracture between different Central Asian clans and, in turn, may lead to inter-clan confrontations and rivalry. As a result, both reputation and deliverables of One Belt, One Road initiative will be jeopardized — not something that is expected from this project.

AIIB China-Central Asia Relations One Belt One Road Silk Road
printTweet
You might also like
Back to Top
CHINA US Focus 2018 China-United States Exchange Foundation. All rights reserved. Disclaimer