China’s Economic Downturn May Be Headed for the U.S.

There is good reason to believe that China’s economic slump may be heading for the United States. Economic growth remains anemic in most of the developed world, and data from key economic sectors like manufacturing and transportation forecast upcoming trouble in the U.S. market. It should come as little surprise that economic stress is rising after China’s mid-2015 market crash. China and other emerging markets accounted for the vast majority of global economic growth in the wake of the 2008 crisis. However, a look at history suggests that both the U.S. and China can trace their recent troubles to structural issues in the global economy that will not disappear any time soon. 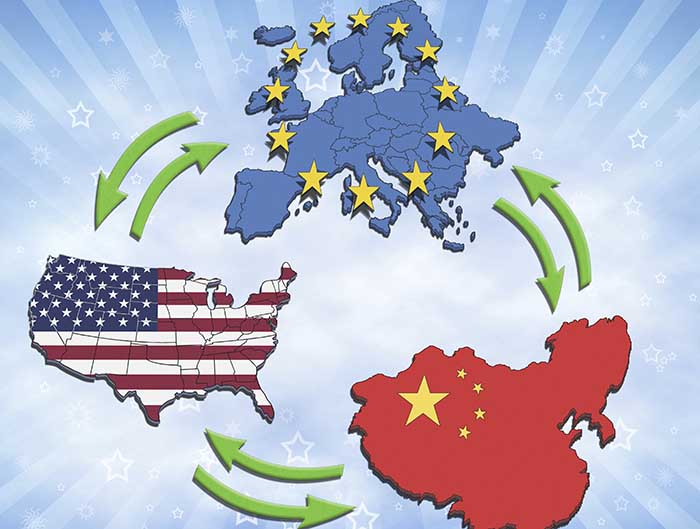 As we enter 2016, a wide range of indicators point to a difficult year ahead for the U.S. economy. Indices that measure the strength of the manufacturing sector are showing a contraction, and the construction and transportation industries are experiencing similar troubles. Both profit margins and sales are declining for U.S. companies. The Federal Reserve’s decision to raise interest rates in this environment makes it seem unlikely that the U.S. stock market will rise above its record highs. Altogether, the chances of a recession in the United States appear to be on the rise.

The mid-2015 Chinese stock market crash seems to have provided the catalyst for recent troubles. In October, the IMF warned of a rising risk of a global recession as a result of slowing growth in China and other emerging markets. These difficulties threaten the global economy because China has been a major source of demand for many commodities, particularly in the post-2008 world. Shaky Chinese financial markets have also prompted turbulence in the global economy. On January 4th, major routs in the Chinese stock exchanges prompted significant sell-offs in the American and European markets.

The seeds of the 2015 Chinese crash were sewn by the rapid expansion of the Chinese equity and real estate markets and shadow banking system in recent years. The rise of these bubbles can be traced to the global economic crisis of 2008. As the global economy entered a prolonged recession, central banks responded by injecting massive amounts of cheap credit into the financial system. The U.S. Federal Reserve, European Central Bank, and the Bank of Japan all took the nearly-unprecedented step of directly buying financial assets on the open market. However, this injection of money did not generate a sizable wave of productive investment or restore full employment. Instead, much of it poured into financial assets, insurance, and real estate (FIRE).

Central bank policy in the developed world encouraged the creation of dangerous bubbles in emerging markets, including China. As money poured into local real estate and equity markets, firms and individuals took on increasing amounts of debt to fund everything from residential construction to share purchases. These investments were based on an unrealistic expectation of ever rising prices encouraged by a global glut of cheap credit. When the bubble popped in the summer of 2015, these prices dropped precipitously. Hundreds of billions of dollars in capital rushed out of China. Altogether, almost one trillion dollars fled emerging markets in the year leading up to September 2015.

By taking the long view, it quickly becomes apparent that the 2015 Chinese crash was not an isolated event. Rather, the 2015 crash was a direct product of the crisis of 2008, which was itself the result of a bubble in FIRE assets. We can identify a wave of capital flowing in and out of the developed and developing world respectively, searching for higher yields in the wake of collapsing asset bubbles. This suggests that the 2008 and 2015 crashes are not anomalous events, but the products of a structural trend in contemporary capitalism that encourages the creation of speculative bubbles.

To understand this story fully, we have to go back to the end of the post-war boom in the early 1970’s. Industrial capital had re-accumulated in the United States, Europe, and Japan following the devastation of the Second World War. Facing a lack of opportunities for profitable investment in traditional sectors, capital increasingly began to flow into FIRE assets. This began the decades-long process of financialization, with all of the consequences that we are now familiar with. However, the post-1970 world could still look forward to the entry of most of the globe into the world market, including future economic giants like China. Today, there are fewer outlets for investment, and even the Chinese economy is undergoing its own process of financialization.

Contemporary capitalism thus seems to face an impasse. It is clear that the structural conditions that create dangerous, destabilizing bubbles – most importantly, capital over-accumulation – have not gone away. Indeed, they may be more powerful than ever. It is difficult to model how contemporary capitalism might solve this problem. The Great Depression, which Keynes described as a consequence of capital over-accumulation, was only solved as a result of the destruction of the Second World War.

Japan has yet to achieve steady medium-term economic growth in the years since the collapse of its massive asset bubble at the beginning of the 1990’s. Many economists, like Larry Summers, seem to believe that steady growth, full employment, and financial stability are no longer feasible targets for developed economies. Absent major economic restructuring, we seem condemned to continue the current cycle of short-lived booms and devastating busts. Let’s hope that the upcoming recession provides a new opportunity to consider alternatives. For now, expect rough waters ahead.