While western economies struggle from the ever-increasing burden of public deficits and debt, there are symptoms in China, too of emerging financial ailments. After many years of accumulated trade surpluses, and a currency that doesn’t effectively re-price against that of its main trading partner, China is awash with liquidity.  This excess liquidity is not only driving up inflation, it has also created an asset bubble.  This dangerous combination of excess liquidity and asset bubbles has been an important contributor to the ongoing banking and economic malaise affecting many developed countries. Now China, a developing nation, may be the next victim.  Luckily, there are options in Beijing to help China avoid the same fate.

During China’s stimulus program, the government provided for the banks to greatly increase their lending.

While bank loans are still the largest part of China’s credit intermediation system, other forms are growing rapidly, and it is of some concern to regulators how to address this.  However, both deposits and lending rates are regulated, and even with a “closed” capital account, China’s economy is outgrowing its ability to finance itself this way.  Even if credit were priced to creditworthiness as opposed to allocated at set rates, it is simply impossible to increase the quantity of lending officers to match GDP growth.

Deposit rates are officially between 50 bp and, for a five year CD, 550 bp, with one year rates at 350 bp.  With inflation now at 650 bp, and food price inflation at over 14%, deposit rates are exceedingly negative.  Official lending rates range from 610 bp for six months to 705 bp for five years.  With official lending rates now at the level of inflation, those receiving the allocation have been fortunate indeed.

The PBOC has begun to use “Total Social Financing” as a measure that it intends to monitor liquidity and credit conditions.  As can be seen from the chart below, as of the end of 2010, traditional bank loans accounted for just under 60% of all financial activity.  This is down from 95% in 2002. 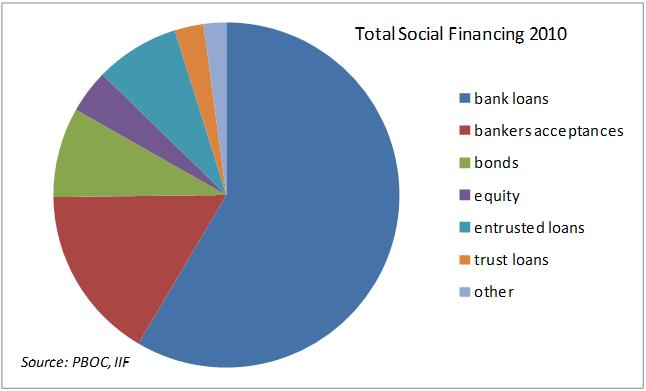 Savers, both individual and corporate, need a higher yielding avenue for their funds, and insurance companies need longer dated assets.  With no market for corporate control, equities have limitations.  Moreover, China has expressed desire for the RMB to be an international reserve currency, but this can only be underpinned by liquid capital markets.  The recent market rush into US government securities is not the result of its rapidly improving credit metrics.  Rather, the market for them is liquid, so buyers know they will be easily able to sell when they have other uses for the funds.

China has been concerned about hot money flows, about pricing its currency for export competitiveness, as well as the potential for outflows.  But the “hot money” has gotten in anyway and a use for excess domestic liquidity is urgent, as can be seen from real estate prices.  Direction of inward investment can be addressed in other ways, such as real estate taxes or incentives to invest in certain industries.

The potential for outflows is valid, but with $3 trillion in reserves and potential for currency appreciation on the part of foreign investors, this should not be a near term concern.  Again, it can also be addressed from a policy perspective by limited capital controls such as daily foreign exchange limits.

Chinese banks’ asset quality has been frequently cited in the news in recent months.  There is room for concern on two fronts.  The first is the Local Government Financing Vehicles (LGFVs), whose loans are beginning to mature, frequently without cash flow to cover principle repayments.  The second is inflated property prices.

The LGFVs were a specific directive from the government.  Local governments are neither allowed to take out loans, nor to issue bonds, so they were instructed to set up these structures.  Where there has been fraud involved (money put into the stock market, given to officials, for example), the central government may not be forgiving, although it is unclear at this point where the losses will be imposed.  But where these loans have gone to fund legitimate projects, they are likely to be rolled over (in the case of what are sometimes significant maturity mismatches) or otherwise covered.

When banks were instructed to lend, they were not instructed to do a credit analysis of their counterparty, nor were they instructed to oversee the project they were financing.  They were told to lend, they were told at what rate, and they allocated the credit.  Local government officials may be held responsible for how the loans were disbursed, but it would be a surprising development to have the government allow significant losses being imposed as a result of its own policy.  The issue of moral hazard is front of mind, but having large impairments on its banks is also suboptimal.

The maturity mismatches on the local government loans make it important to resolve the situation.  Among the ways to address the situation, a logical one is a municipal bond market.  Bonds could be issued for future projects as well as their funds being available to purchase existing local government loans from the banks.  A major policy hurdle to this is address local government revenue sources, because most taxes go to the central government for redistribution, rather than staying at the municipal level, and this is in fact being addressed.  Also, some agreement is likely to be needed on what loans could be purchased.  But with a bond market, marginal credit would be priced instead of allocated.  Better users of capital would have lower interest rates than less efficient users.  China’s banks can receive considerable revenue selling the bonds.

Punitive negative real rates have caused money to leak out of the banking system into channels less easily regulated.  A regulated bond market would allow authorities to maintain oversight on a larger part of the financial system.

Is there sufficient demand?

In addition to the natural domestic demand, the offshore RMB market has grown quickly.  However to repatriate the funds to China requires approval from both SAFE and the PBOC.  Chinese companies, and particularly financial institutions, are nearly always able to get approval.  To date, more than RMB 35 billion has been issued by Chinese commercial banks (including HSBC and BEA’s China entities), and more than RMB 43 billion by Chinese subsovereign financial institutions.  While this is small relative to their asset bases, it has occurred in a very short period of time.  Municipal vehicles would presumably also be granted approval (or more likely the requirement) to repatriate the RMB.

As of May, there were RMB 549 billion deposits in HK (see figure).  With almost no yield, there are two possible reasons for them.  The first is pure currency speculation (with a large negative carry because they yield no more than 72 bp).  The second is to invest in China.  The two are not mutually exclusive goals, of course.  With inward investment, China can grow beyond its current low cost export model, making currency appreciation less problematic. 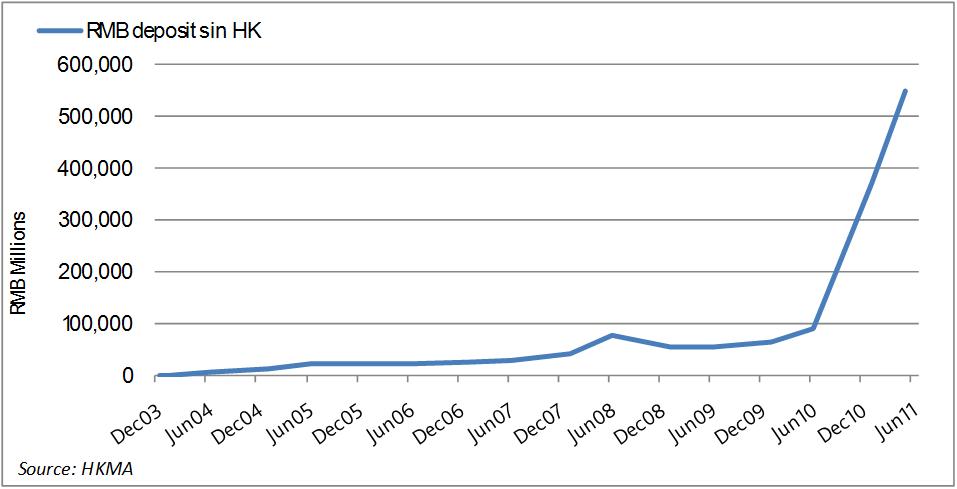 Following the global economic crisis in 2008, the world looked to China for stability and growth while the free market economies of the West sought to recover. Yet three years later, property assets remain a major concern, and continued restructuring of the economy is essential. If Beijing does not enact policies to control inflation and reduce domestic liquidity, especially in the face of another international economic downturn, the Chinese financial system runs the risk of following in the footsteps of its Western counterparts.

Lisa Hintz is an Associate Director of Credit Strategy at the Capital Markets Research Group of Moody’s Analytics.  The view expressed are strictly her own.

China-U.S. Trade Investment RMB
printTweet
You might also like
Back to Top
CHINA US Focus 2021 China-United States Exchange Foundation. All rights reserved.