On October 5, 12 countries led by the United States announced the completion of the Trans-Pacific Partnership negotiations, with all parties basically agreeing to the content of this pact. The TPP involves zero tariff, free flow of personnel and capital, protection of intellectual property rights, improvement in business environment embracing such fields as labor and environmental protection, and restrictions on preferential policies for state-owned enterprises, which have never been touched upon by any past trade agreements. It sets new and high standards for global trade deals. 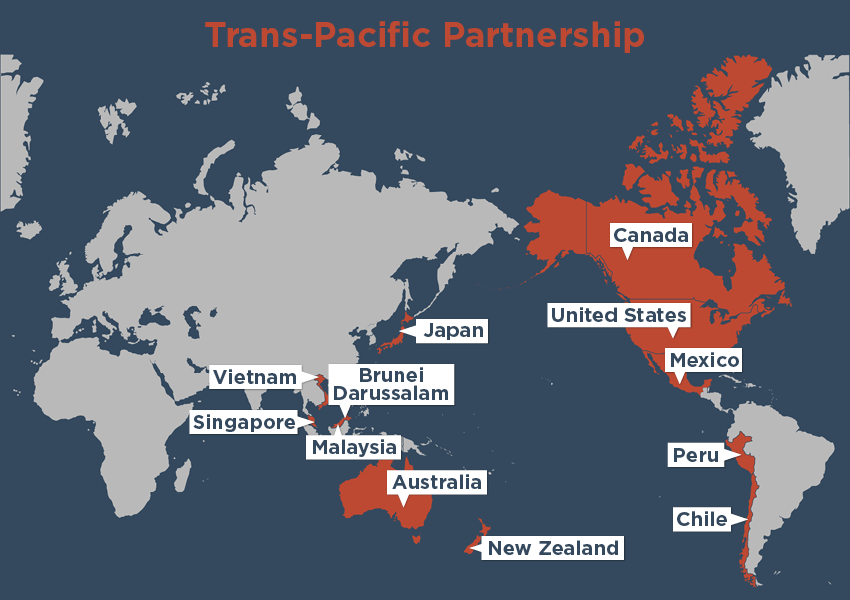 The 12 nations participating in the Trans-Pacific Partnership (State Dept./Jamie McCann)

The 12 TPP countries include the United States, Japan, Canada, Australia, New Zealand and Mexico, and their combined economies account for about 40% of the global total. The pact, if ultimately ratified by the countries, will complete the world’s largest free-trade zone, and will also lead to the construction of a high-standard economic cooperation platform that caters to the trends of world economic development. It will be of great significance to the countries in driving sustainable growth, supporting jobs, promoting innovation and fostering inclusive development.

The TPP is a trade pact dominated by the United States, which seeks to be the dominant power in writing rules for global trade and investment in this century. Another goal is, via the implementation of the TPP, to create an Asia-Pacific economic sphere that is also dominated by the United States, and to get the US deeply involved in the Asia-Pacific economic integration process. For instance, the partnership, through setting high standards on comprehensive market access and rules of origin, will significantly reduce trade barriers among TPP members, and will facilitate US trade and investment in the Asia-Pacific region.

Orrin Hatch, chairman of the Senate Finance Committee, recently said that the Trans-Pacific Partnership deal is a once-in-a-lifetime opportunity, and the US should not be satisfied with a mediocre deal that could not set high standards for Asia-Pacific trade in the future. He said the pact must be able to bring benefits to Americans and could meet the criteria in the bipartisan Trade Promotion Authority. US President Barack Obama also issued a statement after the deal was reached, saying openly that the United States could not let other countries write the rules of the global economy. Obama said that the TPP will set high standards for protecting workers and the environment, and help level the playing field for farmers, ranchers and manufacturers. He appealed to Congress to throw its bipartisan weight behind the deal and ratify it, hinting that after it enters into force, the TPP members will eliminate more than 18,000 tariffs and taxes that various countries put on American exports.

China, a major country in the Asia-Pacific region and the second-largest economy in the world, is not a TPP member. Several Chinese economists and scholars observed that the TPP and the parallel Transatlantic Trade and Investment Partnership still under negotiation naturally constitute a “decelerator” in checking China’s influence in global trade.

On the one hand, the TPP has created a complete “de-Sinicized” industrial chain. In the upstream of this chain, Malaysia, Brunei, Chile, the United States, Australia, New Zealand and Canada could provide raw materials and mineral resources; in the middle stream, South Korea, Japan, the United States and Canada are all manufacturing powerhouses; and in the downstream, the TPP has the zero-tariff arrangements among the member countries in terms of sales and marketing. In the Asia-Pacific region, if the United States makes use of resources from Australia, Chile and Canada, teams up with Japan and South Korea in high-end manufacturing, and offers support to Vietnam, the Philippines and Malaysia in low-end industries, it will inevitably pose grave economic and trade challenges to China.

On the other hand, upon the opening of the financial sector, the partnership aims to construct a core financial system that will be dominated by the US dollar, so as to guarantee the future position for the dollar in the world. Financial capital of the 12 members will undergo deep integration under the TPP framework and will be mutually pegged. This is one of the important reasons why the TPP, compared with the arrangements for the opening of financial services in other international trade agreements, is more profound and significant. Some people believe that through integrating the factors for economic, trade and financial development under the TPP framework, the United States could accomplish its goal of “containing China”.

In fact, China’s development strategy and path are clearly defined and transparent. On the domestic front, China works to modernize the state governance system, carries out reform and opening up to the outside world, adheres to rule of law, and enforces strict disciplines of the Party in the entire process of building a comprehensive well-off society. On the international front, China will play its role as a responsible country, adhere to the road of peaceful development, abide by the principles for win-win outcomes and mutual benefits, and assume international obligations that are commensurate with its actual strength. China and the United States should seek to better understand each other, eliminate mistrust and misunderstanding, and surmount the “zero-sum” mindset. They should also build up confidence in their friendly cooperation and development, face up to their disagreements, engage in frank communications, and work together to unleash positive energy for the construction of bilateral relations. In the face of challenges for the global economy, China and the United States should consider regional and global interests, abide by the preset rules, and make joint endeavors to build economic and trade relations. The two should seek to become the twin engines driving the growth of the world economy, and two major players in promoting reforms in the global governance system.

For China and the United States, a new type of economic and trade relationship is in the best interest of the two major powers, and they should work towards this end. Recently, the two sides have further deepened cooperation in a range of areas, including the mutually reciprocal and beneficial economic and trade ties, more open and inclusive regional economic cooperation, a policy environment favorable to innovation and cooperation, and sectors such as energy, climate change, medical services, infrastructure and financial services. Among the steps already taken, the most important include pushing to complete at the earliest date possible the Bilateral Investment Treaty negotiations, to start at an appropriate time the feasibility study on the Bilateral Investment and Trade Treaty and officially launch negotiations when conditions are ripe. The United States could help China join the TPP while China helps the United States join the Regional Comprehensive Economic Partnership (RCEP), and China and the United States jointly promote the construction of the Asia-Pacific Free Trade Zone and try to complete the construction of the world’s largest free trade zone by around 2030. To be specific, the measures include: to reach a high-standard bilateral investment treaty to encourage mutual investment; to promote trade liberalization and facilitation in the Asia-Pacific region; to continue to promote market-oriented financial reforms; to promote innovation and cooperation in sectors such as energy, environmental protection, medical services, high technology, infrastructure and connectivity; to elevate cooperation in agriculture; and to make progress in cyber and information security. All these are areas that matter to the interests and well-being of both China and the United States, and all countries in the Asia-Pacific region.