The TPP: A Bargaining Chip in the Struggle for Asian Hegemony 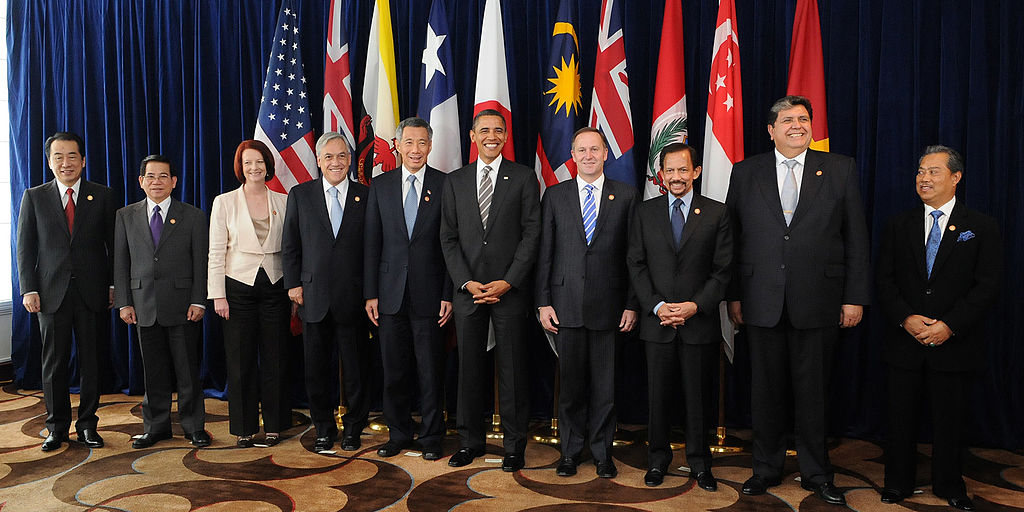 U.S. President Donald Trump said recently that he would consider rejoining the Trans-Pacific Partnership (TPP) if the terms of the deal were to be made “substantially better.” This is a reversal of the administration’s position from last year, when Trump scuttled U.S. participation in the trade deal three days after his inauguration. The TPP was conceived in large part as a geopolitical tool for expanding U.S. influence in Asia. Trump’s willingness to rejoin the TPP represents the neutering of some of the more hardline nationalist elements of his agenda in favor of traditional Washington interests. However, the U.S. may have already forfeited some of the advantages gained by taking part in negotiations prior to 2017, and attempting to renegotiate an already-finalized deal will present serious obstacles.

The Trans-Pacific Partnership has its origins in previous trade talks between Brunei, Chile, New Zealand, and Singapore. It picked up steam in 2008 when the Bush administration signaled that the U.S. would be interested in joining the pact. The succeeding Obama administration made the TPP the economic centerpiece of its much-touted “Pivot to Asia.” So conceived, the primary benefits for the U.S. would be geopolitical rather than economic. The architects of the TPP sought to reduce the economic dependence of Asia-Pacific nations on China by reducing barriers to intra-Asian trade and trade across the Pacific Ocean. This would, hypothetically, make these nations less susceptible to Chinese pressure, and important regional actors like Japan, Malaysia, and Vietnam signed on. The agreement thus played a key role in U.S. plans to respond to China’s rise and reestablish U.S. hegemony in Asia.

However, free trade agreements were and are unpopular in the United States among significant segments of both the Democratic and Republican bases. Aside from xenophobia, the primary focus of Trump’s presidential campaign was the negative impact of trade deals on U.S. industries and manufacturing workers, with Trump going as far as referring to the TPP as a “continuing rape of [the] country.” Trump’s slim margins of victory in Rust Belt states like Pennsylvania, Michigan, and Wisconsin, where this message resonated, propelled him to the presidency. After his inauguration, he quickly made good on his rhetoric by unilaterally withdrawing the U.S. from the TPP. This move was one part of a blitz of nationalist initiatives during Steve Bannon’s tenure in the administration. Facing popular protest and mounting resistance from within the state bureaucracy, many of the components of this agenda were watered down, and Bannon left the White House in August 2017.

The recent announcement of interest in the U.S. rejoining the TPP comes at an important juncture in U.S.-China relations. Trump’s administration has imposed steep tariffs on steel and aluminum, further tariffs on a wide range of Chinese products, and blocked a number of mergers and acquisitions between Chinese and U.S. firms. On April 17, the administration barred U.S. companies from selling products to Chinese tech giant ZTE. In response, China has announced retaliatory actions and tariffs of its own. This escalating trade conflict leaves the Trump administration in the unenviable position of attempting to alter established trading norms with a China that is increasingly assertive and better-able to respond to U.S. restrictions. In this context, deepening trade ties with China’s other trading partners, perhaps to the point of making it desirable for China to acquiesce to a new U.S.-led trading order in the Asia-Pacific, seems appealing to U.S. policymakers. Thus, the Trump administration has come back around to the TPP for the same reasons that the Obama administration pushed the deal in the first place: its use as a bargaining chip in the struggle for Asian hegemony.

However, rejoining the TPP, particularly under as-yet-undefined “better terms” for the U.S., will not be easy. After the U.S. left the deal, the rest of the 11 negotiating parties continued working on the agreement, signing a modified version in March of this year. Notably, the remaining parties stripped out a number of unpopular provisions which had been insisted upon by U.S. negotiators, including more extensive protections for intellectual property claims. The new version of the accord contains provisions for new members to enter the agreement without, of course, modifying its terms. There does not seem to be much stomach among the signatories for renegotiating the agreement in order to rope the U.S. back in. Unless the U.S. is capable of flexing considerable muscle in order to strongarm its “better deal,” it may have to be satisfied with joining without its pet provisos.

As stated above, the Trump administration’s interest in rejoining the TPP must be seen in the context of its ongoing trade disputes with China. Assuming that the administration has a strategy, we can surmise that it is seeking ‘better’ terms of trade with China that will allow it to protect less competitive U.S. industries, enforce intellectual property claims, and open Chinese markets. To gain leverage, the administration is now seeking to rejoin a trade agreement aimed at pulling China’s trading partners a bit further out of its orbit. However, the administration already hamstrung U.S. efforts by abdicating the country’s leading role in pushing for the TPP’s adoption. If anything, this situation should underline the difficulty of stewarding an empire whose head of state lacks the capability to think beyond a two-week horizon.

Trans-Pacific PartnershipUS Trade
printTweet
You might also like
Back to Top
CHINA US Focus 2018 China-United States Exchange Foundation. All rights reserved. Disclaimer