What Next for China? Market Lessons to Build on

New questions are being raised about China’s 2013 pledge to “give a decisive role to markets” following the Chinese Central Bank’s dramatic devaluation of the renminbi this week. Those questions are unfortunate, but understandable, as Beijing continues to struggle with its ongoing interventions in its equity markets. 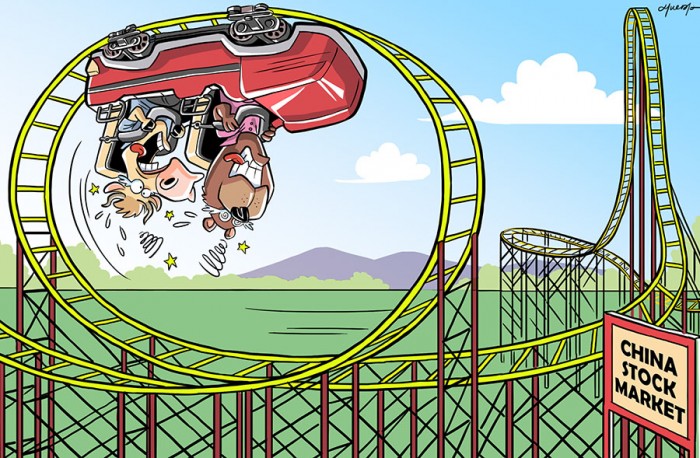 A month after Chinese stocks lost trillions of dollars in value as stock prices plummeted to lows not seen since the global financial crisis, tremendous volatility remains a core theme for China’s stock markets.

This is the case even as the Chinese government continues to take unprecedented interventions to prop up its equity markets following a meltdown that reached its low point on July 8th. This after the Shanghai Index had increased a remarkable, and unsustainable, 150 percent in the preceding 12 months.

But, as a roller-coaster partial recovery continues, what is clear is that no matter how large the Chinese government’s wallet is to finance purchases, and how strong the government’s ability to order brokerages to do its bidding, more state money and less will power for reform are not the long-term solutions to China’s ongoing stock market woes.

Direct and indirect government involvement to help shore up stock prices and placate the Chinese small-scale shareholders has restricted some shares from trading, suspended new IPOs, increased financial support for brokerages, and established a market-stabilization fund to help inject funds into the market. To further try to reduce volatility, China recently banned same-day margin lending, and also banned some accounts under the control of U.S. hedge fund Citadel, and even restricted China’s state-owned CITIC Securities from trading for three months.

The hunt for scapegoats also continues with the announcement that Beijing will be pursuing those guilty of “malicious short selling” or of “spoofing” – a practice by which a purported investor may mislead others by creating a false impression that a stock is trading at a certain price.

Yet, even in a “command economy” with trillions of dollars in reserves, it would be a mistake for China’s “financial mandarins” to think the central government’s ability to “command” domestic behavior can replace the fundamental need for changes and continued reform. More and more state intervention will only lead to further price distortions in Chinese markets.

As I have argued on CNBC and elsewhere, however, there are steps that Beijing can take if markets are to more sustainably resume their upward climb and confidence is slowly to be won back.

First, Beijing must re-commit to the opening of its financial markets and to a deepening of capital market reforms. This is well in line with the pledge to give a decisive role to markets, and will play an important role in line with President Xi Jinping’s “Chinese Dream” and goal of a “moderately well-off society” by 2020.

Rules preventing foreigners from directly investing in the so-called “A shares” traded on the Shanghai and Shenzhen exchanges, combined with limited investment opportunities for Chinese citizens, have led to markets being dominated by small-time shareholders, including many less-than-sophisticated Chinese investors trading on margin. This has significantly contributed to market fluctuations and the present crisis.

In one widely reported quote from the Wall Street Journal, one investor noted, “I don’t really follow news on stocks that closely. My hairdresser said it was still a bull market and I needed to get in.”

Last year, China’s State Council announced it would move forward on a number of financial reforms. These included making progress toward direct bond issuances by local governments, removing some of the limits on using financial derivatives, and streamlining the approval process for IPOs as well as increasing quotas for both inward and outward foreign investment.

Some progress has already been made with innovations including the introduction last November of Shanghai-Hong Kong Stock Connect. While subject to quotas, this link between the Shanghai Stock Exchange and the Hong Kong Stock Exchange has increased two-way market access by eligible mainland and Hong Kong Chinese investors. This should be built upon.

Second, China must allow more of its corporations to succeed and to fail on their own. With every market intervention, investors may well be left wondering whether any investment will ultimately pay off based on its fundamental merits vs. government involvement.

Already, it is clear that the nation’s stock markets are now reliant on official support, and shareholders eager to sell are being prevented from doing so, for now. Yet, with a lack of transparency continuing about the level and duration of government support measures, volatility persists. Recently, five of the most volatile stocks among the 100 largest members of the Bloomberg World Index were all Chinese, including China Life, Bank of China and China Petroleum & Chemical Corp.

While the recent focus has been understandably on the nation’s equity markets, China’s credit markets also need to be allowed to continue to mature – onshore and offshore. This will include permitting Chinese companies, including state-owned enterprises, to default on corporate bond payments.

Bondholders may well not be happy with losses, but such defaults should be welcomed as a sign of China’s further financial maturation. This too must continue.

And third, symbolically, China would do well by announcing that it is phasing out its borrowing from both the World Bank and Asian Development Bank – international financial institutions that provide concessional loans and grants to finance infrastructure and other projects in the poorest nations.

Instead, China should concentrate on the broader economic reforms advocated by these multilateral organizations, as well as its own past pronouncements on moving toward a decisive role of markets. This will include continuing to take steps to build an enabling environment for the private sector – one marked by strengthened rule of law, greater transparency and accountability, and best practices in corporate governance. Such a commitment would in the long run be to the benefit of all of China’s listed companies.

The ability of China to pledge tens of billions of dollars in seed capital to new financial institutions – including a new China-led Asian Infrastructure Investment Bank (AIIB) and the New Development Bank (NDB) launched by Brazil, Russia, India, China and South Africa – and a program of new “Silk Road” and “maritime Silk Road” of infrastructure investments around the Asia-Pacific region – underscores the nation’s ability to find the funds for initiatives important to its national interests.

Money allocated, however, to prop up domestic stock markets is a further example of this. It is ultimately though a short-term fix. As with the United States’ own bailouts and market interventions during the Global Financial Crisis, decisions done in the heat of moment will be debated and second-guessed down the road. This will be true for China.

What is important for China’s leaders – and investors, foreign and domestic – to keep in mind now, however, will be the answer to a fundamental question. Out of this crisis, has Beijing grasped the opportunity to make the changes that are necessary to fostering long-term trust and confidence by investors?

China certainly has the power and more than enough resources to intervene in its own markets.

More important, however, will be the will power to refrain from doing so in favor of the fundamental changes and continued reform that will help ensure long-term, sustainable growth. This is an ongoing lesson from the markets that long-term investors in China can only hope will be taken to heart and reaffirmed at China’s upcoming Fifth Party Plenum this Fall.