The Hundred-Year Marathon: China’s Secret Strategy to Replace America as the Global Superpower

Michael Pillsbury’s book provides an incisive examination of how the Western world has perceived — or misperceived — China’s long-term strategy. Drawing on decades of experience dealing with Chinese agencies while he worked in senior national security positions in the U.S. government, Pillsbury rejects the belief long-held by American officials that China has pursued a peaceful rise and aims to more closely resemble the United States. Instead, he weaves a new image of China’s goal: the metaphorical “hundred-year marathon” to avenge a century of humiliation and ultimately replace the United States as the world’s economic, military and political leader by 2049. Pillsbury cautions against the typical U.S. dismissiveness of ‘hawkish’ Chinese nationalism. By methodically pushing the narrative of China’s fragility and its movement in the “right” direction, Pillsbury argues, the country has won continuous Western goodwill and concessions. Pillsbury argues that in this way, the ‘hawks’ have skillfully deceived Western officials into facilitating China’s own ascent. The Hundred-Year Marathon is successful in challenging the reader to reconsider Western assumptions, and calls for the reader to appreciate the rising giant as the masterful strategic thinker that it is. 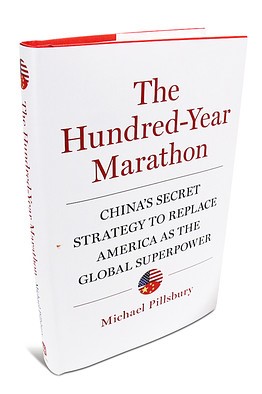