A World Shaken and Reshaped by ‘America First’ 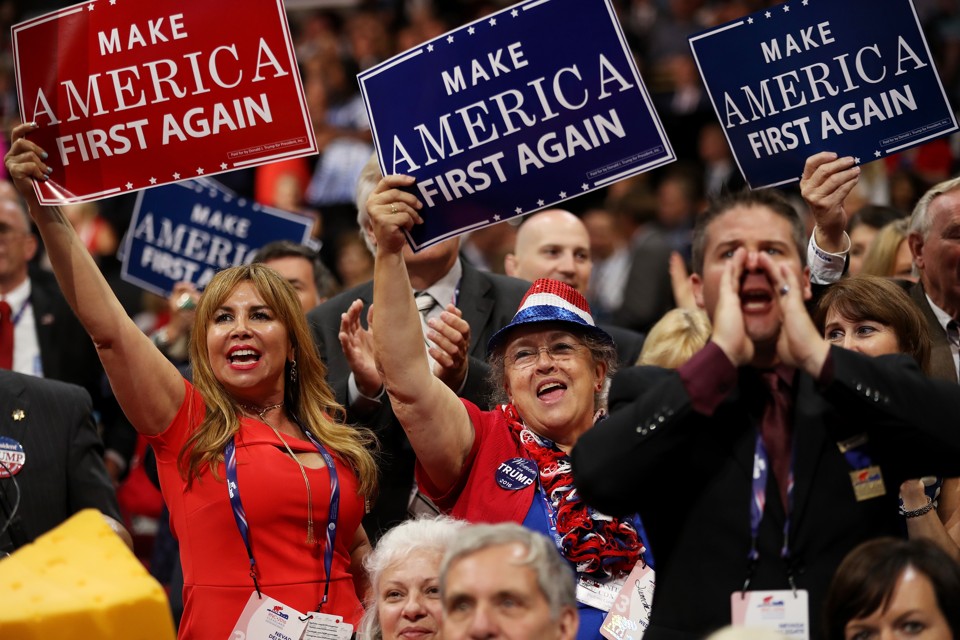 Delegates hold up signs that read "Make America First Again" during the opening of the third day of the Republican National Convention on July 20, 2016. Getty

“America First”, the signature doctrine of US President Donald Trump, has not only reshaped the political ecosystem in Washington DC, but also has brought changes to the world and the global governance system. Some Western media even compared Trump’s victory in last year’s presidential election to the collapse of the former Soviet Union, saying they were of equal importance. No doubt, this comparison was exaggerated. But with the passing of time, many people have realized that the impact of his doctrine could not be underestimated.

“America First” is a very straightforward idea. But after it was interpreted by Trump’s National Security Adviser H.R. McMaster and Gary Cohn, director of the National Economic Council, its meanings have become clearer. It actually means that the world is an arena in which all countries, nongovernmental institutions and enterprises compete to gain advantages, and this is the fundamental nature of today”s international affairs. In other words, the “America First” doctrine is nothing but naked law of the jungle, zero-sum game or winner-take-all game.

It is worth noting that Trump won and moved into the White House under strong sentiments of resentment, dissatisfaction and enmitytoward the outside world. In his inaugural speech, Trump said: “For many decades, we've enriched foreign industry at the expense of American industry”, “we've defended other nations’ borders while refusing to defend our own”, and “one by one, the factories shuttered and left our shores, with not even a thought about the millions and millions of American workers that were left behind”. He promised to put an end to all this, vowing that America would no longer be allowed to be fooled by foreigners.

US allies were Trump’s prime targets for rectification, which has led to serious rifts in relations between the US and its allies. On issues such as trade and the sharing of defense expenses that have a direct impact on US interests, Trump made no bones about them, lashing out at Germany, Japan and South Korea for manipulating their currencies to gain unfair advantage in trade; and labeling the NATO members as “free riders” that usurp the interests of US taxpayers. He demanded that they make rectifications in a given span of time. For the NATO members, they must meet the goal of bringing their defense expenses up to 2% of their GDP within this year; for South Korea, he urged Seoul to immediately start talks on revising the US-South Korea Free Trade Agreement; for Japan, he exerted pressure on Tokyo to launch as early as possible negotiations on US-Japan Free Trade Agreement; Trump decided to renegotiate the North American Free Trade Agreement; and he also threatened to levy high import tariffs so as to protect and safeguard the interests of particular industries of the US.

On issues as immigration and European integration, Trump was also very frank and straightforward. He criticized Germany for its policies on refugees, labeling it as “one very catastrophic mistake”, praised Britain's decision to leave the European Union, saying Brexit would "end up being a great thing", and supported the far-right forces during the French presidential election which were against European integration. Even worse, Trump, in disregard of the most basic diplomatic protocol, badmouthed Germany, saying the EU had become “a vehicle for Germany” and the Germans are “bad, very bad”.

In the past half year when Trump promoted the “America First” policy, the US has shifted into self-isolation. Trump, under the excuses of avoiding damages to the economy, reducing the loss of employment and preventing a deterioration in competitiveness, announced the US retreat from the Trans-Pacific Partnership and the Paris Agreement on climate change. On the issues of climate change and the fight against trade protectionism, the US, due to its reluctance in accepting the mainstream opinions of the international community and refusing to participate in the global governance system, was very much isolated at the recent G7 Summit in Italy and G20 Summit in Germany. The “America First” doctrine is actually a kind of testimony to the US’ decline in global status and its overall strength. As the saying goes, no pain no gain. The US is reluctant to shoulder its global responsibilities and obligations, and has significantly reduced foreign aid. In the short term, by honoring the promises he made during the election campaign, the Trump administration could sustain its basic level of support on the home turf, but in the long term, it would undermine US influence in the world, and lower its public credibility, dominant position and leading role. The failure in its recent attempt to mediate the Qatar diplomatic crisis was a telling example of how the US is losing its power or influence in the world.

The “America First” doctrine and its capricious approach have not only caused dissatisfaction and opposition from its allies, but also prompted them to reconsider their relations with the US, thus leading to a growing divide. German Chancellor Angela Merkel recently said that it’s time for Germany and Europe as a whole to “take our fate into our own hands”. In the joint program for the 2017 election, Merkel and her party have downgraded the status of the US from a “friend” to a “partner”. It was only a minor change of words, but it means a world of difference, meaning downgrading their relations from allies to equal partners.

Canadian Prime Minister Justin Trudeau also said that in a world in which the US could no longer be dependable, Canada should establish a clear-cut stance of depending on itself. Japan has already acted, though it did not state directly and explicitly, including continuing to promote the TPP without the US, reaching a free trade agreement with the European Union and easing tensions in its relations with China. In addition, countries such as Australia, France and Mexico are also reassessing their relations with the US.

In short, the global pattern is undergoing tremendous changes, in an era full of risks but also opportunities.

Donald TrumpAmerica First
printTweet
You might also like
Back to Top
CHINA US Focus 2018 China-United States Exchange Foundation. All rights reserved. Disclaimer