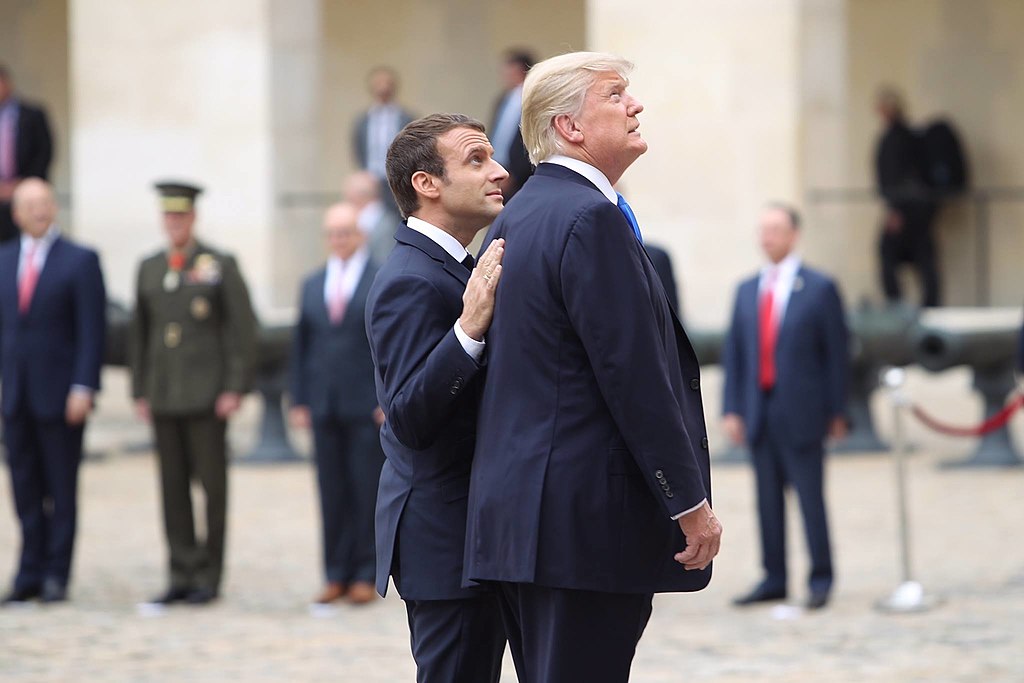 French President Emmanuel Macron and German Chancellor Angela Merkel visited the U.S. at the end of April, signaling that the European leaders still intended to influence Trump’s policies on Europe and the international system.

Compared with Macron’s three-day visit, including his speech to Congress and the State dinner, Merkel only spent several hours in the White House. However, neither Macron-style chemistry nor Merkel’s working visit will persuade Trump away from his interest-driven and results-oriented foreign policies.

The main reason Macron and Trump have a better personal relationship is that they share some common ground. Both of them promised to shake things up during their election campaigns and both were successful businessmen before becoming presidents. They are also both political outsiders and are proud of their independent leadership style.

Unlike other European leaders like UK Prime Minister Theresa May and German Chancellor Merkel, Macron has called Trump more than twenty times. Although Macron reaffirmed his personal relationship with Trump via this visit, he cannot fundamentally redefine the transatlantic relationship and make Trump respect Europe’s interests on important issues like the Iran nuclear deal, tariffs, and the Paris agreement.

“America First” is the core of Trump’s foreign policy philosophy. According to his logic, Trump would like to promote U.S interests at the expense of other countries’ interests.

On the Iran nuclear issue, Trump thinks the Obama administration made a very bad deal with Iran and gave it more time and space to maneuver and cheat. Therefore, Trump is eager to correct this perceived mistake. But Europe has played a significant role on Middle East issues by adopting multilateralism, and a binding nuclear deal is conducive to Middle East stability and the security of the European periphery, which Trump has not considered.

During Macron’s trip, Trump said that the fate of the Iran nuclear deal will be revealed on May 12, implying that Macron did not fulfill his primary goal in his visit. Trump tends to cause uncertainty and resolve problems unilaterally rather than multilaterally because he firmly believes that if those competitors or opponents don’t know his next move, the U.S. will get an upper hand in negotiations. In addition, bilateral negotiations will benefit the U.S. more because of its relative strength. If the U.S. joins a multilateral mechanism like the TPP, other countries can unite together to pressure the U.S. to make concessions.

Europeans hope that the U.S. can continue to shoulder its international responsibilities like ensuring European security or leading the international trade system and respect Europe as an important ally as well as a global power. The EU has also tried to prove that it is a helpful partner to the U.S. in achieving its strategic goals. For example, EU member countries toughly condemned and imposed sanctions on Russia over the Skripal incident in the UK, and the UK and France joined the limited U.S.-led air strike against Syria. The EU also shared concerns with the U.S. on steel overcapacity and intellectual property issues with China.

The EU has made great efforts to solidify the western world and try to change Trump’s views. However, Trump’s learning curve on the EU is too long and it is not easy for him to change his idea that Europeans have benefited from unbalanced transatlantic trade, especially when Germany and other European partners failed to contribute enough to NATO.

It is expected that Trump will stick to unilateral approaches to force the EU to make concessions on trade and to share more of the NATO burden. Despite Macron and Merkel’s visits, the Trump administration reiterated its familiar demand for reciprocal trade relations and higher defense spending.

Most worrisome for Europe is that the U.S. might no longer support the current liberal international order based on principles of multilateralism, free trade, and openness, which is also the bedrock of transatlantic relations. After over one year of high level visits and meetings, European countries have not been able to bring Trump back to the traditional track.

Since the Trump administration perceives China as a strategic competitor, the EU also needs to reconsider its position between Washington and Beijing. In fact, the EU would not benefit from assisting the U.S. to balance China, not only because the EU has huge economic interests with China, but also because China is playing an increasingly important role in global governance and the multilateral international order in line with European values.

Some European scholars said that the EU should avoid taking sides and undermining the multilateral trade system. For its own interests, the EU should work with China to support the rule-based multilateral international system instead of kowtowing to U.S. pressure to disrespect, disrupt, and dismantle world order.

Emmanuel MacronDonald TrumpChina-US-Europe Relations
printTweet
You might also like
Back to Top
CHINA US Focus 2018 China-United States Exchange Foundation. All rights reserved. Disclaimer