Hawks as Corinthians: Thucydides and the “Stand Up to China” Argument

It has become a meme to say that if the U.S. exercises leadership and “stands up” to China, showing American strength, then China will be forced to back down from its “aggressive” behavior and the status quo will be comfortably maintained. This meme has the advantages of appealing to American identity as the world’s sheriff and defender of the weak, of being easily communicable on the campaign trail, and of serving as a simple one-sentence guide to politicians eager to preserve the post-Cold War world: increase the military budget, deter and confront China through aggressive signaling and regional alliances, and all will be well. 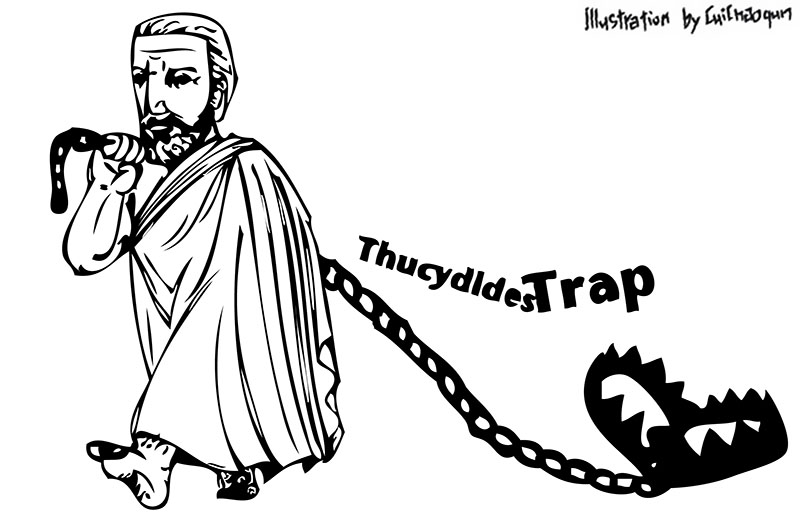 This argument is not an American original. To the contrary, it echoes back all the way to 432 BC, to an ancient Greek assembly at which Sparta’s allies, particularly the Corinthians, accused the Athenians of injustices and aggression and sought to secure a Spartan decision for war against Athens. Thucydides, who wrote the history of Greek polities during this period, would be pleased by the comparison, seeing as he sought to write a history that would “last for ever” and in which the events of his own narration would be repeated “at some time or other and in much the same ways” (Thucydides, 1.22).

Now, we must be careful with historical analogies, and obviously it would be preposterous to determine contemporary foreign policy solely by examining the seemingly petty disputes of ancient Greeks, but a quick exploration of the Spartan Assembly of 432 does indeed make American hawks sound quite a bit like the belligerent Corinthians. It may just be that something useful can be learned from this ancient dispute beyond the ahistorical fable of the Thucydides Trap.

The Corinthians made four arguments for why Sparta should stand up to Athens. For those who observe contemporary Sino-U.S. relations, these may sound eerily familiar.

First, Corinthian rhetoric cast Sparta as the sheriff, charged with keeping Athens in line. “It is you who are responsible for all this,” the Corinthians declaimed, “it was you who in the first place” allowed Athenian power to expand (1.69). “We have to complain of Athens for her insolent aggression,” the argument continues, “and of Sparta for her neglect of our advice” (1.68). Spartan inactivity was preventing a serious response to Athens and letting down Sparta’s allies. Today, this is the most basic argument of President Obama’s critics.

Second, Athenian “salami slicing” was threatening the region. “As for the Athenians, we know their methods and how they gradually encroach upon their neighbors. Now they are proceeding slowly because they think that your insensitiveness to the situation enables them to go on their way unnoticed; you will find that they will develop their full strength once they realize that you do not see what is happening and are still doing nothing to prevent it” (1.69). This is the line-in-the-sand argument: the adversary must be stopped at some point, and better sooner than later. It is made frequently today in reference to China’s activities in the South China Sea.

Third, the way to stop aggression is through deterrence and aggressive signaling. “The likeliest way of securing peace is this: only to use one’s power in the cause of justice, but to make it perfectly plain that one is resolved not to tolerate aggression” (1.71). Peace comes not just through strength but also through a foreign policy with zero tolerance for aggression. Today, this is the precise line espoused by those who put their faith in deterrence.

Finally, regional shifts threaten a state’s historic leadership. The Corinthians end their argument with this urgent plea: “From your fathers was handed down to you the leadership of the Peloponnese. Maintain its greatness” (1.71). In other words, true leadership requires hegemons to participate in the disputes of their neighbors so they can be considered great. This is the idea behind the “New American Century,” the name of a (now-defunct) neoconservative thinktank, and, unsurprisingly, presidential candidate Marco Rubio’s campaign slogan.

What is to be made of these arguments that seem to transcend time and place?

To begin, the line between deterrence and war is thin. An intolerance of aggression was supposed to be the “likeliest way of securing peace,” but as the Spartan assembly understood, it was the likeliest way of securing war. Deterrence does not work when neither side is willing to back down. Because Athens refused to make any concessions to Sparta, war broke out a year later, in 431 BC (see here for the full context).

The connection between deterrence and war matters especially today because hawks tend to assume that China will back down in response to American deterrence and signaling. Those who bother to justify this assumption generally argue that China will have to give in because of the realities of American power (and competition) and because of the threat of economic isolation. The trouble with this reasoning is it assumes away questions of honor and the balance of justice—something Thucydides would never have done. What Americans see as “aggression” the Chinese see as justice: for centuries China was abused by third-parties controlling its littoral seas. Now, finally, it is standing up to these centuries of aggression and reclaiming its ancestral waters.

The argument also assumes that China has only two options: compete and be outmatched by the strength of America and its allies, or give in and submit to America’s order. But in fact, a serious alliance with Russia, which is increasingly economically estranged from the West, combined with a “look West” Belt and Road strategy that significantly shifts Chinese trade and investments towards Central Asia and Europe, could refashion the strategic and economic landscape. Continued asymmetric investments on China’s part—pumping out submarines like so many cars, as Lyle Goldstein has suggested—would furthermore radically shift the strategic balance. Chinese restraint thus far has prevented this from happening. China has more than two options, especially in the long run.

Finally, the argument assumes that it is strategically tolerable for the Chinese to live in a region dominated by the military and ideological hegemony of America and its allies. Even apart from China’s unique history, which predisposes it to seek a secure regional leadership role, this belies the expectations of history and geography.

The question of “aggression” also deserves attention. In 432, Athens was acting foolishly, but strictly speaking was not violating the terms of its previous peace with Sparta. The Spartans ignored this technicality when they voted “that the treaty had been broken and that war should be declared” (1.88). Today, China’s land reclamation in the South China Sea is a powerful parallel: land reclamation is explicitly legal under international law, yet (because of sovereignty disputes) it has become common to call Chinese land reclamation aggressive (even though all the other claimants also reclaim land, though at a smaller scale). Calling this and other such acts aggressive—for example, sending oil rigs or fishing boats to “disputed” waters or defending territorial claims with water cannons—is defining aggression down. If China were to make a new territorial claim, threatening or invading a territory unambiguously lawfully possessed by another state, that would be an aggressive and illegal action deserving of censure. China has not done this. Short of this, it makes no strategic sense to worry about drawing red lines across disputed islands. Defining aggression down was a mistake in 432 BC and is still a mistake today.

Hawks today see the U.S. as withdrawn, docile, and weak by choice. They see China as aggressively violating norms and threatening American leadership. And they believe the way to reassert American greatness is to reinvest in American power and clash with those who oppose the nation’s vision. This is how the Corinthians saw Sparta in the fifth century BC. In that century, the Corinthians won the argument. Sparta delivered three diktats to Athens (1.126 ff.), but Athens refused to make concessions. A twenty-seven year war followed that ended the fifth century Athenian Golden Age, decimated the population of the Greek world, and ultimately solved nothing. “Never before had so many cities been captured and then devastated . . . ; never had there been so many exiles; never such loss of life” (1.23). Whether our modern Corinthians will win the argument today, only time will tell.