Japan-US Relations in the Trump Administration 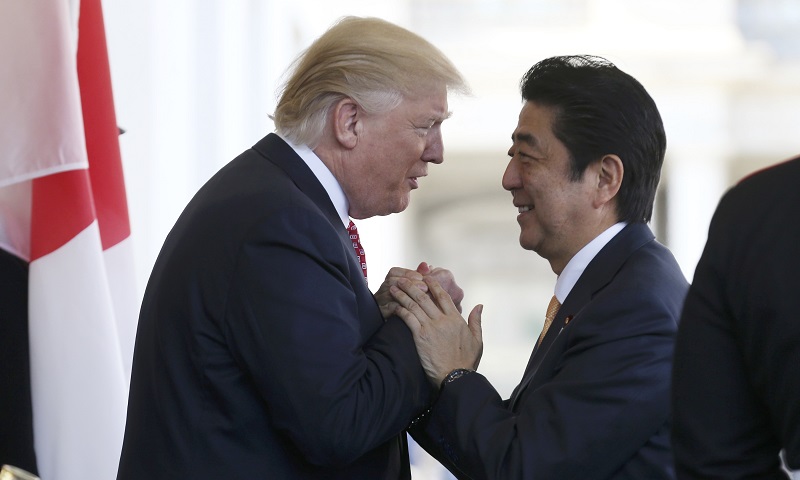 Japanese Prime Minister Shinzo Abe is greeted by US President Donald Trump ahead of their joint news conference at the White House in Washington February 10, 2017. (Reuters)

Recently, I made a one-week academic visit to Japanese universities and institutes, exchanging ideas with Japanese scholars on Japan-US relations in the Trump administration. I found that Japanese scholars expressed confidence in the security relationship between Japan and the US, but also had uncertainties.

On the one hand, Japan-US security relations have been maintained, even somewhat strengthened, as reflected in the interactions between the US and Japan’s defense sectors and the Trump security teams’ recognition of the importance of the Japan-US alliance. After years of contact and cooperation, the US and Japan defense departments understand each other. In cases of regional security tensions, the two sides showed the determination of solidarity in addressing the threats. Meanwhile, the Trump security team, especially Secretary of Defense James Mattis and Assistant to the President for National Security Affairs H.R. McMaster, firmly supported US-Japan security cooperation, which enhances Japan’s confidence in the US security commitment.

On the other hand, there exist uncertainties as reflected in the following aspects: (1) The Trump administration adheres to the principle of “America First” and deals with diplomatic issues in a transactional way. It is likely that Trump may not attach the same importance to the US-Japan relations as his predecessors did. The US withdrawal from TPP is a typical manifestation. (2) It is not clear what Trump’s Asia-Pacific security policy is. For instance, Japan has little idea on the US policy toward the Korean Peninsula. (3) The Trump administration has been emphasizing thar US allies should bear more responsibilities, but Japan doesn’t know what the new role is and to what extent it plays. The Trump administration made it clear that allies should do more financially. However, given the constraints of the Japanese constitutional system and the fact that Japan is in the stage of aging and sub-replacement fertility, the requirement will not be easily met. If so, Japan-US relations will be adversely affected. (4) There are uncertainties in Japan’s and the US’ domestic politics. There is the US mid-term election in 2017. If the result turns out unfavorable for the Republicans, the ruling basis of the Trump administration would be weakened. Also, Japan’s Liberal Democratic Party president elections will be held next year, and Abe’s success can not be guaranteed. Consequently, the stability of Japan-US relations will also face challenges. (5)  Japan-US trade is still a serious issue that both sides must face. Although the leaders of the two sides formed a consensus that the security and trade issues should be discussed separately, and the Japan-US economic dialogue mechanism established, it is likely that trade frictions and differences will occur.

In view of the uncertainties in Japan-US relations, some Japanese scholars suggested that there are now three options for Japan: (1) to strengthen Japan’s national overall strength, such as Japan’s efforts to strengthen offensive military forces and revise the Constitution; (2) to strengthen ties with other countries, such as Japan actively promoting TPP11; (3) to consider seriously China’s “One Belt One Road” initiative and whether to join the Asian Infrastructure Investment Bank.

Obviously, Japan still puts the relationship with the US as its diplomatic basis and top priority, especially in maintaining the stability of US-Japan alliance. In this way, Japan hopes to elevate its position in international and regional affairs. Meanwhile, it also begins to seek options in foreign affairs as a way to hedge the uncertainties of US-Japan relations and maximize Japan’s interests.

Donald TrumpUS-Japan Relations
printTweet
You might also like
Back to Top
CHINA US Focus 2018 China-United States Exchange Foundation. All rights reserved. Disclaimer