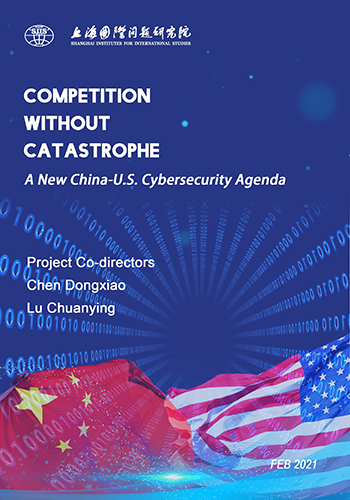 The issue of cybersecurity has long occupied an important place on the China-U.S. agenda since 2012. Along with considerable attention from the top leaderships, the two governments have established various channels to settle cybersecurity disputes through dialogues and communications. Through a decade’s evolution, the connotation of China-U.S. interactions around cybersecurity has been continuously expanding, while challenges constantly grow.

China and the U.S., as two major powers in cyberspace, are faced with common challenges in cybersecurity to a large extent, though inevitably troubled by accompanying divergent interests. With the superimposed effects of technological competition, geopolitical discord and sustained global spread of the coronavirus, the cyberspace governance has witnessed intensified fragmentation, factionalism, and ideological rivalry since 2020, presaging a bleak view for the future.

We, scholars at the Shanghai Institutes for International Studies (SIIS), believe that promoting dialogues, managing disputes and conflicts, strengthening cooperation, safeguarding cyberspace stability and common development serve the interests of both China and the U.S., and should thus be the primary base for bilateral interaction upon transition of the U.S. leadership. In this context, the SIIS Center for International Cyberspace Governance opted to lead a joint taskforce on cybersecurity studies with academic input of senior scholars in prestigious Chinese think tanks, in an attempt to make a preview of Biden’s cyber policy and its impact on China-U.S. cyber dynamics, with policy recommendations toward promoting strategic stability and prosperity in cyberspace.

According to the report, the Biden administration would partially return to the Obama era cyber strategy, along the lines of reinstating the White House leadership and strengthening departmental coordination, stressing cybersecurity as a crucial national security issue, as well as fortifying governance capacity of the U.S. in the cyberspace and digital era through revitalized public-private partnership, alliance collaboration and multilateral diplomacy, etc.

Meanwhile, the report also argues that although Biden would calibrate the cyber policy of his predecessor, the new administration would largely inherit Trump’s China policy, including that in the area of cyberspace and digital field, and particularly hang on to Trump’s legacy of “containment and suppression” of China. This prospective policy direction will almost assuredly induce complexities to the overall China-U.S. relations, including the bilateral dynamics in cyberspace and the digital domain. Predictably, fierce competitions between China and the U.S. will continue in the cyber digital transformation, among which the contest for cyberspace rule-making will be further intensified. What’s more, the U.S. behavior of high toning the so-called China-U.S. ideological conflict will for sure to severely impede bilateral efforts in promoting stable cyber relations.

For the purpose of safeguarding China-U.S. strategic stability and advancing shared interests in cyberspace and the digital domain, this report makes a list of policy recommendations as follows. First, to resume cyber-related dialogues and consultations. In particular, mechanisms for bilateral talks should be restored and strengthened over issues of shared interests and common concern, such as digital trade, cross-border data flows, combating cybercrime, and regulating state behavior in cyberspace. Second, to rebuild confidence building measures (CBMs). CBMs between the Chinese and American militaries may include restoring and reinforcing mechanisms for crisis prevention, risk control and reduction. Third, to reassure the value of international law as normative guidelines in the global governance of cyberspace and the digital domain. In coordinated practice and common application of “international law of co-existence” and “international law of co-operation”, the two sides should work to define legal norms at times of crisis and step up consensus-building process of international law in areas of shared interests and common concern. Fourth, to revitalize agenda for China-U.S. cooperation on digital trade. The to-do list for collaboration may include designating anti-pandemic efforts to digital trade interactions, initiating “China-U.S. Digital Trade and Public Health Alliance”, jointly setting new rules for e-commerce, and building a win-win scenario in digital infrastructure projects. Fifth, to reshape China-U.S. coopetition in cyberspace and science & technology. Both sides should work to revive high-level STC (science and technology cooperation) dialogues on emerging industries with focus on technological collaboration in areas concerning human well-being, and jointly decide on a rational borderline between STC and national security.

As year-round observers on China-U.S. cyber relations, the authors of this report have put forward questions which reflect the key cyberspace challenges that currently exist between the two countries. Similarly, it is in our belief that the policy recommendations initiated in the report would be of significant reference to the Biden administration’s efforts in managing cyber and digital competition, expanding areas of cooperation, advancing cyber CBMs, and achieving China-U.S. strategic stability & common development in cyberspace.