In the last two-three months a recurring major news item is the dispute over the South China Sea and the decision of the Arbitral Tribunal (AT) and the Permanent Court of Arbitration (PCA). If you read the reports from American mass media and the comments from American political leaders, the impression that you get is that China has violated international laws as specified under the United Nations Convention on the Law of the Sea (UNCLOS) and that China is bullying her smaller neighbors and is posing a military threat to the world.

Is that really consistent with the truth?  This article provides the background information to understand this issue and to reach a decision.  The decision shows that yes there is an abuse of power, but the country doing the abuse is not China.

What Is the Dispute? 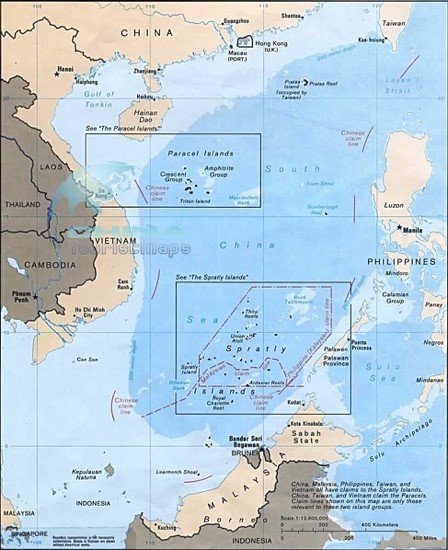 Both consist of many small islands and reefs, and especially in the Spratly Islands, the various features are claimed by Brunei, China, Indonesia, Malaysia, the Philippines, and Vietnam.

UNCLOS stands for the United Nations Convention on the Law of the Sea. It is defined by a 200-page international agreement under the UN that became effective in 1994.  It defines terms such as territorial waters, exclusive economic zones, and continental shelves, as well as specifying the privileges of their owners.  For example, in Part II (Territorial Sea and Contiguous Zone), Section 2 (Limits of the Territorial Sea), Article 15 (Delimitation of the territorial sea between States with opposite or adjacent coasts), after defining the delimitation lines, it states, “The above provision does not apply, however, where it is necessary by reason of historic title or other special circumstances to delimit the territorial seas of the two States in a way which is at variance therewith.”  In other words, historical rights are key to determining territorial sovereignty, which is a critical point, and will be discussed more later in this article.

There is also a 4th procedure for certain special categories which are not relevant for our discussion.

Arbitral Tribunal (AT) and Permanent Court of Arbitration (PCA):

Article 5 (Procedure) of Annex VII states: “Unless the parties to the dispute otherwise agree, the arbitral tribunal shall determine its own procedure.” The arbitral tribunal (AT) usually hires the Permanent Court of Arbitration (PCA), which provides administrative services (e.g., linguistic, research, other support services) for hire. PCA is not a court in the conventional understanding of that term but an administrative organization with the object of having permanent and readily available means to provide administrative services. It is also located in The Hague, Netherlands, but it is not the International Court of Justice (ICA), which some media articles and political leaders purposely mixed up. It is also not the International Tribunal for the Law of the Sea (ITLOS), which again some media articles and political leaders purposely mixed up.

Article 298 (Optional exceptions to applicability of Section 2), states that, “a State may, without prejudice to the obligations arising under Section 1 (General Provisions) of Part XV, declare in writing that it does not accept any one or more of the procedures provided for in Section 2 with respect to one or more of the following categories of disputes.” The categories listed include Article 15, the delimitation of the territorial sea between States with opposite or adjacent coasts. This is exactly what China did.  From the very beginning, China declared in writing that it would not participate and not abide by the decision of this arbitral tribunal because this dispute involves territorial sovereignty/historical rights, which cannot be properly taken into account by the abitral tribunal.

China claims sovereignty over the Paracel Islands and the Spratly Islands dating back at least several hundred years, and Chinese fishermen have also been fishing around these islands for also hundreds of years. These islands have been marked as part of China in various maps. In 1946 after WWII ended and Japan returned Taiwan to China, China sent four military ships, accompanied by an American naval ship, to Taiping Island (the largest island of the Spratly Islands, also known as Itu Aba Island) and several other islands in the South China Sea to take back the control of these islands from Japan (note: islands such as Taiping Island is under the jurisdiction of China’s Taiwan Province). Even textbooks approved by the Indonesian government in the 1940s and 1950s recognized these islands as belonging to China. In 1956, North Vietnam had also declared that the Paracel Islands and the Spratly Islands are historically Chinese territory.

The arbitral tribunal has five arbitrators. One was recommended by the Philippines. One would be recommended by China. Since China chose not to participate, the other four were chosen by Judge Shunji Yanai of Japan, who was the then president of the International Tribunal of the Law of the Sea (ITLOS). Judge Yanai was once the advisor to Japan’s Prime Minister Shinzo Abe on his plan to amend the Japanese Peace Constitution to allow Japan to engage in non-defensive military operations overseas.

China’s position has always been that it is willing to engage in bi-lateral discussions with each country to negotiate an agreeable settlement and to resolve the dispute.

What China did is completely consistent with UNCLOS and is perfectly legal, but you would not get that impression based on what you read from the American mass media and what you hear from American political leaders.

The arbitral tribunal and the PCA declared that all of the islands in the Paracels or Spratly’s are rocks, and not islands that can sustain human habitation or economic life of their own, and therefore cannot claim any exclusive economic zone or continental shelf. What is the truth? Taiping Island is 0.9 mile in length and 1/4 mile in width with an area of 110 acres, and since December 2007, also contained an airport. It has fresh water, can grow vegetables, can support livestock, as well as the habitation of people permanently living there. It even has a hospital. This detailed information was made known again to the world when Mr. Ma Ying-jeou, when he was still the President of Taiwan, visited Taiping Island on January 28, 2016. The obviously false conclusion of the AT/PCA leads one to question the sincerity and truthfulness of the whole process.

What Is the Motive of this Whole Initiative?

So what was the motive behind this initiative by the Philippines? Countries like Philippines and Vietnam of course would like to grab as much territories from China as possible. Especially with the U.S. urging them on and supporting them with military, political, and financial help, they figure they have everything to gain, and nothing to lose. In spite of the fact that the U.S. has no jurisdiction over any part of the Paracel Islands or the Spratly Islands, and despite the claim that the U.S. does not take a position in this dispute, the U.S. is sending many of its warships, including aircraft carriers and fighter jets, into the South China Sea. The U.S. is also conducting joint military operation practices with countries such as Philippines, Japan, and Australia, all while openly criticizing the legal actions of land reclamation of islands under its sovereignty.

Similar land reclamation activities have also been done by Vietnam and the Philippines. The U.S. has also complained about China setting up an oil exploration rig near one of its islands, but the U.S. has never said anything negative about similar, earlier, and larger-scale actions by Vietnam who has been extracting oil from various oil rigs and making millions of dollars every year. Since the large majority of China’s activities are on real islands or on islands/reefs/rocks that are not submerged under water all the time, and not on reefs/rocks that are submerged under water at high tide, the criticisms related to UNCLOS is really not applicable. The U.S. criticisms of China’s activities often purposely do not distinguish the two types of activities, thus making many false accusations.

The U.S. has accused China of building up its military strength, despite its own presence of military bases all around China, e.g., in Okinawa and other parts of Japan, in South Korea, in Guam, and in the Philippines. The U.S. also has military troops in many other parts of Asia. The U.S.’s huge 7th Fleet is patrolling the waters all around China, with 60 to 70 ships and submarines, 200 to 300 airplanes, approximately 40,000 sailors and marines, has participated in 80 maritime exercises, and conducted 192 port visits throughout the Indo-Asia-Pacific region just in 2013. The U.S. also has military alliances with several countries around China, in particular, the U.S. has mutual defense treaties with Japan, South Korea, the Philippines, Australia, and New Zealand. Since the U.S. often uses its military muscles for its own purposes around the world, why shouldn’t China be allowed to increase its military strength for the purpose of national defense?

More than 70 years have elapsed since the end of WWII, Japan still has not acknowledged and apologized for massive and inhumane atrocities against China and other Asian countries during WWII, while Japanese leaders still visit the Yasukuni Shrine that honors 14 Class-A convicted and executed Japanese war criminals. Where is the U.S.’s conscience and sense of justice?

Since China is now the U.S.’s main economic competitor, instead of looking within to figure out ways to improve and become even more competitive, the U.S. has been adopting a policy to surround, isolate, and weaken China.  Instead of looking for ways to co-exist peacefully and work together with other countries to try to solve the world’s many pressing problems, such as environmental protection, nuclear non-proliferation, disarmament, fight against terrorism, improving world infrastructures for the 21st century, world hunger, and world peace, the U.S. is creating unnecessary conflicts with China and destabilizing peace in Asia, as well as the whole world.

It is also important to point out that the U.S. never signed UNCLOS, in spite of trying to use UNCLOS to criticize China.

That is why studying what has been happening in the South China Sea is a good case study of the abuse of world power by the U.S.