Feb 17 , 2017
printTweet
On February 1, 2017, Rex W. Tillerson was sworn in as America’s top diplomat after a tight confirmation vote that garnered the largest opposition in the U.S. Senate’s history for an incoming secretary of state. 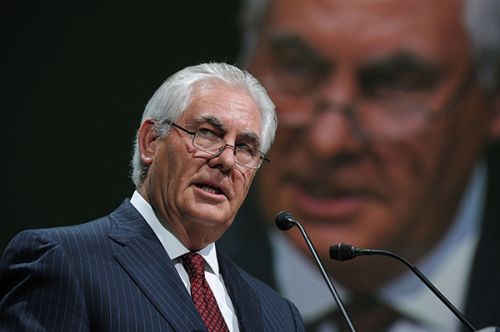 Rex W. Tillerson
As a globe-trotting, ex-Fortune 500 CEO, Mr. Tillerson passes for one of the rarer sensible types within an administration that has worn its lack of restraint and judgment as a badge of honor. Little of that sense was in evidence though at his confirmation hearing on January 11. In a mere 162 words of prepared remarks on China, Mr. Tillerson misstated international law as well as U.S. policy on Beijing’s island-building activities in the South China Sea. Pressed to clarify, he compounded this ignorance with a set of belligerent policy suggestions, including denying China physical access to its own islands, which if enforced could leave the Asia-Pacific at the doorstep of war.
Although it appears that Mr. Tillerson has since tempered his remarks, as secretary of state he must speak and act more cautiously.

China is fully within its legal rights to construct artificial islands on the high-tide features that it administers in the South China Sea, as well as on those submerged features that lie within the territorial sea of a high-tide feature that it administers or claims in these waters. Such construction is not an encroachment or “illegal taking of disputed international territories” – much less a violation of the undisputed territorial sovereignty of a neighboring state “akin to Russia’s taking [of] Crimea” from Ukraine in 2014.

Mr. Tillerson’s remarks also betray a lack of understanding of the U.S. position on the sovereignty claims in the South China Sea. As a matter of policy, the U.S. takes no position – and hasn’t for decades – on these rival claims. And on the one occasion that it did in fact throw its full diplomatic weight behind a claimant’s position, the State Department and its adviser, John Foster Dulles, came down on the side of (the Republic of) China.

On September 8, 1951, at the San Francisco Peace Treaty conference, Japan renounced all right, title and claim to Korea, Taiwan and Penghu, the Kurile Islands, South Sakhalin, the League of Nations-mandated Pacific Islands, and the Spratly and Paracel Islands. On April 28, 1952, hours before these renunciations was to come into force, the Yoshida government renounced Taiwan, Penghu and the Spratly and Paracel Islands in a bilateral Treaty of Peace (Taipei Treaty) with Chiang Kai-shek’s Nationalist government in Taipei.

The timing of the Taipei Treaty was not a coincidence – it was meticulously scripted by the State Department’s Dulles. A month prior to the San Francisco conference, Dulles had resolved to restore to Japan after its signature on the San Francisco Treaty but before its coming into force, all the freedoms contemplated by the treaty except sovereignty with respect to military matters. For Chiang too, the signature on the Taipei Treaty prior to the coming into force of the San Francisco Treaty represented a victory of sorts: It preserved his government’s status, and face, as representing one of the victorious war-time allies.

Nor was the Taipei Treaty’s content a coincidence. By late-December 1951, Dulles had spelled out the key treaty provisions that Prime Minister Yoshida was instructed to offer Generalissimo Chiang and re-establish normal relations between the two governments. The inclusion of the Spratly and Paracel Islands in the territorial provisions of the treaty – and thereby signaling Washington and Tokyo’s favorable opinion of Chiang’s claim to these islands – was not the point of contention. That pertained instead to the contingent sovereignty over the scope of territories controlled by Chiang that the U.S. and Japan were prepared to recognize. Only nationals and juridical persons who resided in or were registered on territories under his current or future sway were to be recognized as falling under the Republic of China’s sovereignty.

This was done so that if Nationalist forces were ousted from territories they currently held (the U.S.-Republic of China Mutual Defense Treaty was only signed in December 1954), there could be no legal basis, stated or implied, for the People’s Republic of China to claim sovereignty over Taiwan, Penghu, and the Spratly and Paracel Islands. To this day, the U.S. does not accept or reject the claim that Taiwan is a part of China and, under this pretext, claims its intrusion into cross-straits affairs is technically not an interference in the internal affairs of China.

It is for this reason too that the future title of Taiwan, Penghu, and the Spratly and Paracel Islands was left undetermined in the San Francisco Peace treaty as well as in the Taipei Treaty. Japan renounced these territories but left their final disposition suitably vague so that these territories would not legally devolve to a “hostile regime … that could enable [it] to endanger the [U.S. Seventh Fleet’s] defensive position which is so vital in keeping the Pacific a friendly body of water.” Indeed, as early as June 27, 1950, just two days after the outbreak of the Korean War, it became the policy of the Truman Administration to punt the question of Taiwan’s status out into the indefinite future.

America’s legal legerdemain regarding the Taiwan Question is disingenuous. None of this should obscure the argument though that on the one occasion when the Spratlys and Paracel Islands’ disposition was actively considered at the multilateral level, the U.S. favored (the Republic of) China as the superior claim-holder.

It is worth observing that the Japan-Republic of China peace treaty, being a bilateral treaty, cannot bind non-signatories. Whether Japan even enjoyed the authority in the first place to transfer title in San Francisco and in Taipei isn’t clear either. Unlike the case of Taiwan and Penghu, whose title Tokyo could trace to the late-19th century Treaty of Shimonoseki, the Spratlys were forcibly occupied in the late-1930s. For its part, Beijing has had harsh things to say about the San Francisco Peace Treaty. Unjustly excluded from the conference as well as the consultation processes that preceded it, Beijing traces its claim to these land features to the war-time Cairo and Potsdam Declarations, which was confirmed in Article 3 of its September 1972 normalization agreement with Tokyo.

This having been said, no other claimant state in the South China Sea can produce a Spratlys and Paracels renunciation or reversion clause in its own post-war bilateral normalization agreements with Japan. The Philippines was wholly concerned at the time with the issue of reparations and France, even as late as 1956, was absorbed with claiming the Spratlys for itself – not on behalf of Vietnam.

On December 8, 2016, at a ceremony in Beijing to commemorate the 70th anniversary of China’s landing and recovery of the South China Sea islands, 96-year Li Jingsen recounted his role on board the Yongxing, one of the vessels that had led the operations. If Mr. Tillerson has the chance to encounter Mr. Li on his next visit to Beijing, he might learn that the warships sent to recover the islands in 1946 were even provided by the United States. China and the claimant states have made valuable progress in bilateral ties since the ASEAN Foreign Ministers’ Meeting (AMM) in Vientiane, Laos last July. The Trump Administration should support – not disturb – the progress made so far.
South China SeaRex TillersonTerritorial Disputes
printTweet
You might also like
Back to Top
CHINA US Focus 2018 China-United States Exchange Foundation. All rights reserved. Disclaimer