Tillerson a Counterbalance to Recklessness 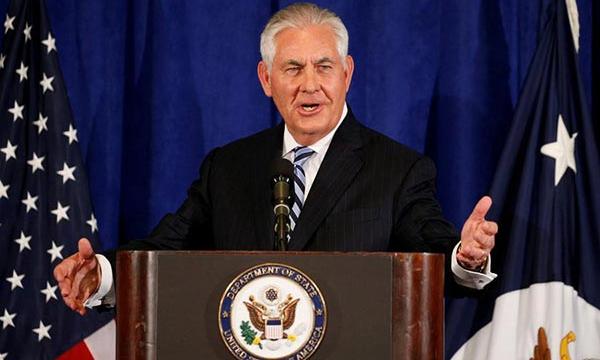 Secretary of State Rex Tillerson holds a press briefing during the UN General Assembly in New York, US, Sept 20, 2017. [Photo/Agencies]

US Secretary of State Rex Tillerson will be in Beijing this weekend to prepare for President Donald Trump's visit to China and to discuss issues ranging from denuclearization of the Korean Peninsula to trade and investment.

The trip comes two weeks after his meeting with Chinese State Councilor Yang Jiechi in Washington. US Commerce Secretary Wilbur Ross also visited Beijing early this week, while Chinese Vice-Premier Liu Yandong is in United States this week to co-chair with Tillerson the inaugural China-US Social and People-to-People Dialogue.

Such frequent high-level contacts are a good way for the two nations, which have different cultures, political systems and are at different development stages, to improve mutual understanding and trust, expand cooperation and manage differences.

Tillerson and Defense Secretary James Mattis, are regarded as key "adults" in the Trump administration, where Trump's loose talk often triggers controversy and confusion in US and around the world.

When Trump tweeted in June that "While I greatly appreciate the efforts of President Xi & China to help with North Korea, it has not worked out. At least I know China tried," it was Mattis and Tillerson who came out to soften the tone. "We (China and US) reaffirmed our commitment to implement in full all relevant UN Security Council resolutions. For example, we both agree that our companies should not do business with any UN-designated North Korean entities," Tillerson said.

Speculation has been rife in Washington in the past two months that the top US diplomat might resign after his reported frustration with Trump on conflicting messages, policy issues and his power in staffing the State Department.

The rift seemed apparent a month ago when Tillerson said that "the president speaks for himself" while responding to questions about Trump's words that "many sides" were to blame when white supremacists and anti-racism protesters clashed on Aug 12 in Charlottesville, Virginia.

If he was to, his speculated successor Nikki Haley, now US ambassador to the United Nations, looks less diplomatic and much more hawkish. For example, Haley said at the UN early this month that Democratic People's Republic of Korea leader Kim Jong-un is "begging for war". She used undiplomatic language to describe China's proposal for "dual suspensions" to the DPRK to freeze its nuclear activity while the US and the Republic of Korea freeze their annual joint military drills, saying "the idea that some have suggested a so-called freeze for freeze is insulting."

It would be wise for Trump to keep Tillerson. His departure, if it really happens, will deal a heavy blow to the Trump administration whose credibility depends a lot on its "adult" guidance. Tillerson is an essential one.

While Tillerson has no longer mentioned such words following criticism back in the US, the thinking reflected in his March words is critically important for the rising power and the established power to maintain good relations.

With his pragmatic style, Tillerson will find that the two largest economies could cooperate a lot more in dealing with regional and global challenges if they follow the principle he touched on in March, even if he no longer says it publicly for fear of backlash at home.

China-US RelationsRex Tillerson
printTweet
You might also like
Back to Top
CHINA US Focus 2018 China-United States Exchange Foundation. All rights reserved. Disclaimer