The historic agreement on the Iranian nuclear issue is an encouraging event for the development of China-U.S. relations, at a time when growing pessimism dominates American media and academic communities. Such cooperation between China and the U.S. will help improve the overall bilateral ties if the two countries forge practical collaboration on a number of the "global governance" issues.

In our cover story, Yang Jiemian, President Emeritus of Shanghai Institutes for International Studies, hails that the cooperation between China and the U.S. in the Middle East affairs reflects the potential for a “new model of major country relations.”

China’s A-share market has been extremely volatile in recent weeks, making headlines throughout the world. Chinese economist Yi Xianrong assures in his article, “After Corrections, China’s A-Shares Resurgent,” that the upswing in the Chinese stock market will continue in the second half of the year.

On the South China Sea issue, we selected articles by Wu Shicun, President of China Institute of South China Sea Studies; Doug Bandow, Senior Fellow at Cato Institute; and Joan Johnson- Freese, Professor at U.S. Naval War College. All three authors urge the decision-makers in both countries to try their best to prevent conflicts by avoiding miscalculation and misjudgment. Professor Johnson-Freese warns, “If one scorpion stings the other, both will die.” 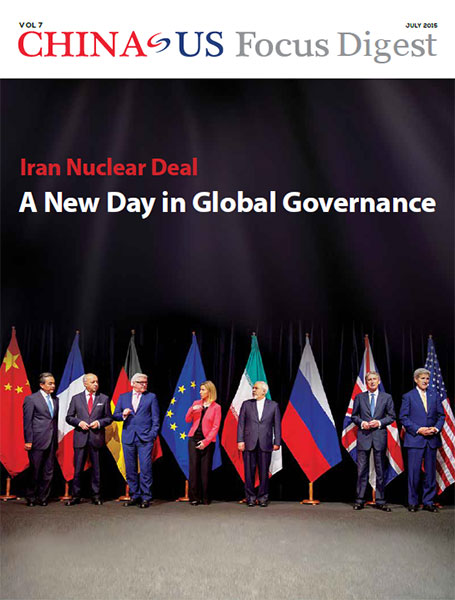