V16: A Community for All

The newly released US National Security Strategy labeled China as a rival competitor that seeks to challenge American interests. The Trump administration is said to be pursuing tougher trade penalties against China early this year. These developments underline the complexities of the world’s most consequential bilateral relationship.

Labeling China a “competitor” ignores the complexity of the relationship. It does not change the fundamental drivers of bilateral ties. The two economies have become so connected and interdependent that the need for joint efforts to address regional and global flash-point issues is imperative. When facing this reality, it is hard to envision a relationship characterized by rivalry. Neither country, nor the world, can afford for this relationship to be disrupted.

Trump's representation of China as a competitor mischaracterizes China’s rise. China has sought to convince other countries that its rise will not be at their expense, and that it is not a revisionist power.

President Xi Jinping’s vision of a community of nations of a shared destiny is a main theme in this issue of the Digest. Chinese Foreign Minister Wang Yi makes it clear that fostering such a global community is an overarching goal. George Washington University Professor David Shambaugh argues that 2017 was a banner year for China’s diplomacy. 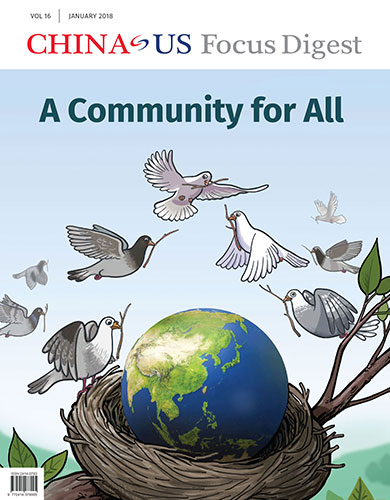