Under the decisive leadership of President Xi Jinping, the People’s Liberation Army (PLA) has launched its most comprehensive reform program to date. The proposed measures will change the PLA’s size, structure, and techniques. These reforms are expected to yield their desired goals of improving the military’s combat effectiveness, administrative efficiency, and deference to Communist Party leadership. 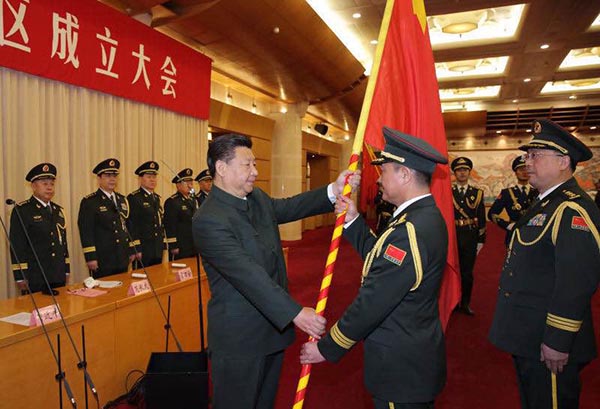 One prominent step, reducing the number of active duty personnel, is an unsurprising reform. The PLA and other armies have been decreasing their troop size for years to save money and to pay for manpower-saving modern defense technologies. Even after the new 300,000 personnel cut is completed, China will still have the world’s largest armed forces in terms of numbers—about two million active duty personnel and many reservists.

China is mimicking other militaries by reorganizing its operational structure to create five standing combatant commands, with permanent staff responsible for both peacetime and wartime missions in China and neighboring regions. This measure is less ambitious than the U.S. command structure, but likewise aims to break down barriers between rival commanders. This structure necessitates that military leaders focus on fighting as an integrated team regardless of their military service or the platforms they have under their command.

The decision to create a separate ground forces command reinforces the rebalancing among the military services and encouraging of integrated joint operations. The PLA’s traditionally Army-dominated structure makes less sense when the probable opponents (Japan, the United States, and the Southeast Asian states contesting Beijing’s claims in the South China Sea) will most likely engage China on the air or sea rather than on land.

From the point of view of the U.S. military, perhaps the most important change has been the establishment of two new structures, the PLA Strategic Support Force (PLASSF) and the PLA Rocket Force (PLARF), as well the restructuring of the Central Military Commission (CMC).

Despite its name, the PLASSF is more than a simple support force—it will have the same capacity of independent operations as the PLARF. This is notable as the PLASSF will include “new type forces” such as cyber, space, and electromagnetic capabilities. In addition to likely concentrating resources on cyber network defense and information and psychological operations, this step sustains the PLA’s focus on building anti-access, area-denial (A2/AD). These advances will make the PLA capable of attacking U.S. Command, Control, Communications, Computers, Intelligence, Surveillance and Reconnaissance systems. The aim is to exploit U.S. asymmetrical vulnerabilities such as dependence on information technology, outer space systems, and other enabling networks to allow the PLA to resist what are still superior U.S. conventional military forces.

The new PLA Rocket Forces will support this A2/AD strategy through their ability to deter or destroy enemy forces that approach China as well as threaten nuclear strikes against an adversary’s homeland. The organization’s new name, while an improvement on the former title of “Second Artillery,” is still a bit misleading since the PLARF will not only control long-range missiles, having both conventional and nuclear warheads, but also command the Navy’s burgeoning strategic submarine fleet and any Air Force nuclear bombers.

It is important to note that the recent reforms do not necessarily signify a change in Chinese threat perception—PLA planners have been focusing less on winning a ground war against Russia and defeating the U.S. Navy and Air Force for at least a decade.

The reforms do not suggest a new foreign policy or national security strategy, their intent appears to be to empower the PLA to conduct its existing missions more effectively. These advances will lead to improved integration and flexibility rather than applying the military to new ventures.

The anxiety that has resulted from Party control, as seen in the defense reforms, has been prominent during the last few years. Having the PLA led by true Party believers may not make PLA commanders more aggressive than the promotion of more traditional Chinese nationalism. If Party loyalty carries more weight than professional competence in promotion decisions this could degrade the PLA’s combat effectiveness.

Cracking down on corruption will more clearly improve the PLA’s morale and use of resources, which is especially important now that China’s official (and probably real) rate of growth of defense spending is decreasing. Furthermore, with the standing up of the PLASSF and other measures to bolster civilian Party leadership, the CMC can now more clearly control, and answer for, the PLA’s wayward cyber activities.

Fundamentally, the most important constraint on Chinese military adventurism remains the PLA’s limited combat effectiveness. The last time China fought major wars, in 1979 against Vietnam and even more extensively in 1950-53 against the U.S. military in Korea, the PLA’s performance was mediocre. Most likely the improved equipment, technology, and structures since then will make the PLA a much more formidable opponent in a future conflict, but nobody in Beijing or Washington can predict.