Despite China’s economic slowdown, the Chinese government has plans under its "Made in China 2025" program to spend $300 billion by 2025 to become self-sufficient in critical technologies and strategic emerging industries. In early March, Premier Li Keqiang told the annual session of the National People's Congress that, "We will accelerate R. & D. on and commercialization of new materials, artificial intelligence, integrated circuits, bio-pharmacy, 5G mobile communications and other technologies, and develop industrial clusters in these fields." In addition, the program supports developing China’s manufacturing of agricultural machinery, aircraft, electric cars, rail equipment, robots, and shipbuilding. 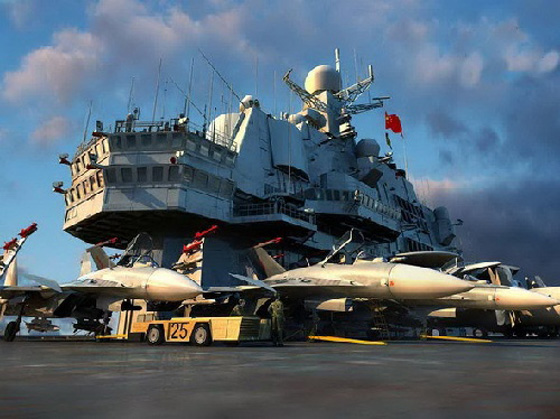 On the one hand, Beijing’s need for foreign arms imports has been declining thanks to a broadly successful import substitution policy. China’s national defense industries can now produce the Soviet-era weapons previously imported from Russia. Whereas China used to be one of the world’s leading weapons importers, now it buys only a few specialty items like advanced warplanes, helicopters, surface-to-air defense missiles, and some electronic, avionics, and engines.

China’s inability to manufacture a top-line fighter engine despite devoting years of targeted effort is a clear setback. Yet, China’s defense industry has been doing better with other critical technologies. For example, China is developing fifth-generation warplanes (J-20 and J-31 fighters), which so far only the United States and Russia have been able to produce, as well as long-range ship-to-ship, air-to-air, and other missiles that at least on paper are as good as, if not better than, any foreign competitors. 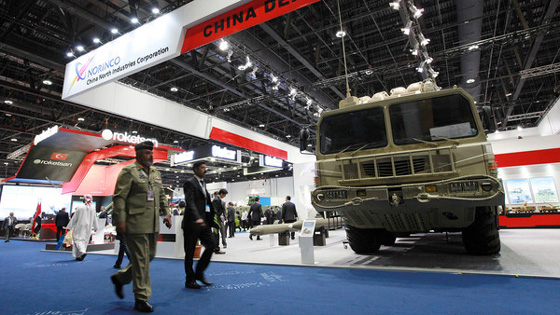 On the other hand, these developments have propelled China’s rising presence on international arms markets. In the past, China has been selling mostly low-cost small arms, light weapons, low-tech ammunition, and a few knock-off Soviet-type weapons platforms. Although China cannot yet offer the range of advanced high-tech weapons systems sold by U.S., European, and Russian firms, China has been selling more goods to more countries, showing special strength in a few niche areas such as armed drones, light trainer aircraft, and low-end ground force weaponry.

According to Stockholm International Peace Research Institute (SIPRI) Arms Transfer Database, Chinese exports of major conventional arms, which excludes most light weaponry, grew by 74 percent from 2012 to 2016. Compared to the previous five-year time period of 2007-2011, China’s share of global arms exports nearly doubled, to 6.2 percent, with 44 countries buying Chinese weapons during this period. In this process, China surpassed Britain, France, and Germany to become the world’s third largest arms exporter.

China sells weapons for the same reasons many other countries do—to gain influence and access with recipient countries, acquire revenue that can be reinvested for development of new weapons, and strengthen countries that can balance or distract potential adversaries, such as the United States.

However, China’s arms exports probably do not yield much revenue, especially in the context of the China’s large overall foreign commerce. Indeed, one of China’s core competitive advantages is charging lower prices than Western or Russian competitors for “good enough” weapons whose capabilities are adequate even if inferior to some more expensive alternatives. Other Chinese advantages including providing generous subsidies, loans or tied aid packages to purchasing countries as well as imposing weaker end-use monitoring requirements on governments that might employ these weapons for purposes that would be unacceptable to many potential Western suppliers.

China still lags well behind Russia’s 25 percent or the United States 33 percent of the market. In addition, Chinese sales are heavily concentrated in a few key countries--Myanmar, Bangladesh, and especially Pakistan. Many African and several Latin American countries purchase weapons from China but the value of these purchases in modest. China has yet to gain a major presence in the highly lucrative Middle East arms market.

China’s completive disadvantages compared with Russia and the United States are its limited portfolio of systems for sale, potential customers’ concerns about the limited battlefield experience of Chinese weaponry, several high-profile accidents of recently sold Chinese weapons, the undeveloped marketing skills and aftersales maintenance support of many Chinese defense companies, and questions over how well Chinese companies have integrated foreign defense technologies into their own systems, which contain many Chinese components.

Nonetheless, China has made considerably more progress than India in weaning itself off foreign weapons imports and rising to the ranks of a major global arms exporter. Looking ahead, China is well positioned to retain a large share of the rapidly growing international market for military drones. The PLA’s ongoing military modernization should result in its discarding large volumes of older weapons that could prove attractive items to countries that cannot afford Western or Russian weapons. Recognizing the limits of its electronic, communications, and other technologies, PRC defense sellers use NATO and U.S. standard for defense equipment to make it easier for countries to buy Chinese weapons platforms and then equip them with more advanced Western technologies. Furthermore, Iran may resume buying large volumes of Chinese weapons following the removal of UN sanctions, especially if the Trump administration succeeds in weakening Iran’s ties with Russia, Tehran’s main arms supplier.

The United States has long expressed concern over China’s export of weapons to countries such as Iran, Syria, and Venezuela and has sanctioned Chinese arms sellers for violating the Iran, North Korea and Syria Nonproliferation Act. U.S. unease at the size and opaqueness of China’s large military buildup are well-known. The latest developments will likely lead the Trump administration to continue efforts to reduce Russian defense technology transfers to China, sustain the EU arms embargo on China, and make U.S. weapons and other U.S. exports more competitive in global markets.