Just like Mona Lisa, China’s development of weapons and equipment has been colored by a dense mysticism. Since the National Day Parade in 1999, the weapons and equipment displayed at the event have caught the attention of the world. To some degree, they reflect the latest developments in China’s military technologies as well as its transparency of military strength. In this year’s parade to commemorate the 70th anniversary of the victory of the War of Resistance against Japanese Aggression and the World Anti-Fascist War, the weapons and equipment to be shown are also a display of China’s self-confidence and openness, since they are 100% made in China and 84% of them make their first appearance. It marks their systematic, balanced and sustainable development. 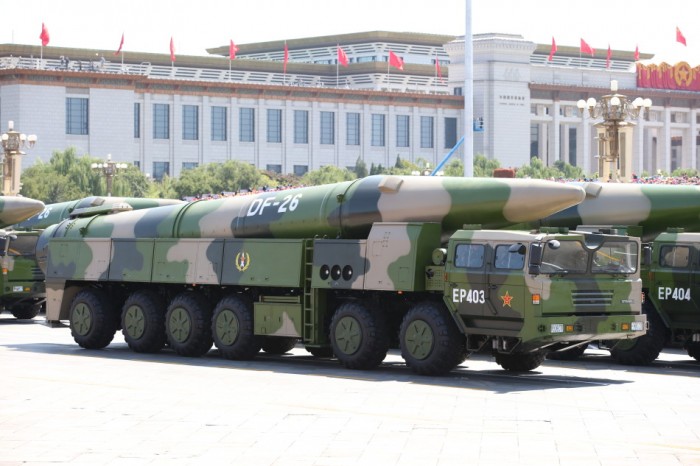 Systematization of combat capabilities. Take the formations of air equipment as an example: They are composed of the main-battle aircraft of the air force, navy aviation and army aviation, including not only fighters, bombers and carrier-borne aircraft, but also planes for early-warning, aerial refueling, anti-submarine warfare, patrol and intelligence, as well as helicopters for transport, reconnaissance and combat missions. Gradually, China’s air forces have developed from being capable of assuming various tasks to being capable of conducting a complete system of operations, including long-range strike, air interception, air-to-ground attack, sea surveillance, etc.. Such bottlenecks as early-warning, aerial refueling and intelligence aircraft have been overcome and become indispensible “enablers” and “trump cards” in China’s air force arsenal.

Balancing of offense and defense. As always, the formations of air defense, maritime attack and strategic strike are particularly eye-catching. Among the “stars”, HQ-9 and their upgraded types are the third-generation air defense missiles and can rival American “Patriots” and Russian C-300 missiles, with some performances excelling the latters. With HQ-9 as the core, China’s land-based air defense capabilities now cover various types, and can intercept some ballistic missiles. Maritime attack capabilities, represented by “Yingji” anti-ship missiles, can pose a deterrent to an adversary, in terms of both range and precision. In addition, strategic strike capabilities, represented by “Dongfeng” ballistic missiles, are the cornerstone for national security. They possess both nuclear and conventional missiles, cover different ranges, and most importantly are more sophisticated. Techniques for orbit maneuver, combined guidance, multiple warhead, decoy and solid fuel are being tested, while command and control, rapid reaction and mobile launching are maturing. Further, land-based long-range cruise missiles have enriched the means of strategic strike.

Sustainable upgrading of technologies. It is a common practice and developmental trend of world defense industries to upgrade the performance of existing platforms. F-16s have been upgraded to the four types of F-16A, F-16B, F-16C, and F-16D. Through a major improvement of avionics devices and a minor change of structure, the third-generation aircraft have been upgraded to the 3.5-generation. In the same vein, J-10B is an upgrade of J-10A, greatly improving the operational performance of the J-10 series. The series of HQ-9 and Dongfeng missiles are similarly upgrading to improve their tactical and technical performances.

However, China’s enhanced transparency also lends an excuse for some to sensationalize the “China Threat”. In fact, China has reiterated that it is an internationally accepted practice to showcase advanced weapons and equipment in a parade, it is a reflection of the level of military modernization, it is a delivery of a positive energy that China will maintain world peace together with the peoples of the world, and it is not directed against any other country. The message it wants to pass: Like the other countries and peoples that participated in the World Anti-Fascist War, China and Chinese people cherish very much the victory of the War of Resistance against Japanese Aggression and the World Anti-Fascist War.

The participation of Mr. Ban Ki-moon, Secretary-General of the United Nations, in China’s commemorative activities also shows the world’s mainstream perception of the victory. Its historic significance has a particular meaning to China. Without that history, China would have no opportunity to display those self-developed weapons and equipment. Some would comment that the parade of the weapons and equipment is showing off “muscles”. As a matter of fact, there is still a large gap between China’s weapons and equipment and those of developed countries such as the United States. There is plenty of room to improve, and it is not worthwhile or necessary for China to show off. It not only commemorates the victory, but also demonstrates China’s confidence and determination to maintain the victorious achievements and the peace for the world.