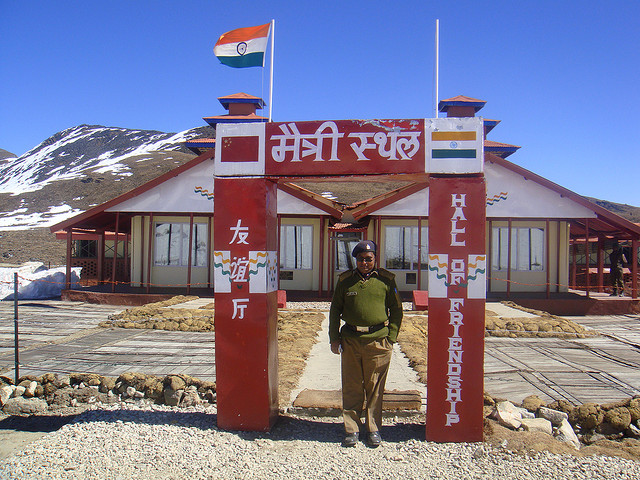 Trouble rose again recently at the China-India border. As of now the Indian army has stayed in Chinese territory for nearly a month, and there seems to be no resolution in sight.

Some people believe that Prime Minister Narendra Modi has a clear strategic objective in Kashmir, leading to India nibbling up Chinese interests. Because the ‘Tibetan government-in-exile’ is in India, forces for Tibetan independence may well run wild. I believe the two issues are related. India is not unaware of the Chinese attitude: If they occupy the area, China will for sure take action. As a rising power, China will absolutely not abandon its sovereign rights or interests. Both sides are waiting for negotiation because that’s the most effective path to a peaceful resolution. If India attempts to resolve the issue by force, China will do the same, which will lead to conflict or even war.

India has provoked the standoff mainly for domestic reasons. Modi has learn from Deng Xiaoping and wishes to advance economic reform in India, but the process has been a tough one. Either there has been no progress or reform progress (for example in the financial field) has caused extensive social discontent. When in trouble domestically, a country tends to make trouble externally. There are numerous historical examples. In this situation, we have to understand why India has done so and when its behavior will change, or an effective countermeasure will not be found.

China is exercising restraint not because it is afraid of India. It is now much stronger than its southern neighbor, after all. But it is China’s responsibility as a regional power to safeguard peace in the region. It will be perfect if the dispute is resolved peacefully. That doesn’t mean any slow movement on the part of China is a show of weakness. The Indian defense minister said that ‘India today is different from what it was in 1962’ (when India was defeated in an armed conflict with China). But the same is also true for China, and Indians are well aware of that. Tough rhetoric can in no way be a solution.

The question of Tibet may become more complicated due to the border dispute. The attitude of the ‘government-in-exile’ is to a large extent shaped by India. China will of course pay close attention. But I would rather not think it will affect the stability of Tibet.

I have argued before that while handling its relations with India, China should be cautious about pushing India into the American camp. On July 10, the US, Japan and India had a joint military exercise in the sea east of India. Should the border standoff in any way contribute to the US, Japan and India forging an alliance, it would be rather troublesome for China. China does not pursue alliances, but only ‘strategic partnerships’. But a strategic partnership is different from an alliance: partners deal with shared challenges and problems while allies are against third parties, i.e., ‘enemies’.

However, I don’t think India will be eager to be a vassal of the US. India is a big country. It does not want to be a vassal of any other country. Once becoming an ally of the US, India will lose its autonomy in diplomacy. Japan is such an example: diplomatically it is only a half-sovereign state; I don’t think India will give up its full sovereignty. But to counter China, it may well engage in closer cooperation with the US and Japan in some areas, which will be unfavorable for China and will take greater wisdom for China to handle.

Even a local conflict with China will not push India to the US side immediately unless a massive war breaks out. Like China, which needs a peaceful international environment for its modernization drive, India also needs a peaceful environment for development. At present, neither governments nor the private sector in the West have much money to invest in India. Hence Chinese investment remains important for India.

In previous diplomatic disputes, some Chinese habitually argued for sanctioning or boycotting the other party. The same can occur in this border standoff. But such a proposal is not feasibleChina has experienced massive industrialization and become the world’s manufacturing center. India has had only limited industrialization and remains basically an agricultural country. As an economy, India is not as open as China. The higher the level of openness, the more sensitive to sanctions an economy is; the more closed, the less sensitive it is. For example, the DPRK is a closed country and sanctions on it have been of no use. On the contrary, sanctions often fuel hatred and nationalism among the people of the sanctioned state.

India is already rather nationalistic vis-a-vis China because of its defeat in 1962. This is somewhat similar to the Chinese nationalism vis-à-vis Japan. Moreover, the state of India is not very united: there are over a hundred languages and there is not a nationwide political organization that rallies the whole country -- so nationalism has become the only feasible practice. In this situation, if China sanctions India, India will only become more nationalistic and more united, which will again be unfavorable for China. What’s more, China does not have a tradition of imposing sanctions. Last year China’s relations with the Philippines and some other countries were rather tense on the question of the South China Sea. China did not resort to economic sanctions even then.

China’s knowledge about India is far from being sufficient. India is an ancient civilization and a developing country facing both difficulties and opportunities. Since reform and opening up, Chinese academia has focused its research on China-US relations, but they have not got it right yet with the US, let alone with India. In both economic and scientific fields, China is chasing after the US and India is chasing after China. We must not forget about those who are after us by setting our eyes only on those ahead. That will be no minor mistake.

As two influential powers in Asia, the direction of China-India relations is the center of extensive attention. The recent border tension has again fueled thinking that ‘there must be a war between China and India in 10 years’. Such speculation is not very reasonable.

It is first of all a question of scale. A small conflict is not necessarily a war. For example, India-Pakistan standoffs have often led to deaths of soldiers, but they are not considered wars. China has pursued a peaceful rise ever since it adopted the reform and opening up policy. But peaceful rise doesn’t mean the absence of even minor conflict, rather it implies that China must have the ability to control the outbreak of a regional or world war. If it can’t even resolve a small conflict, it may only become a surrenderer. But that is not what has happened in reality. Like in the South China Sea dispute provoked by the Philippines and the Diaoyu Islands dispute stirred by Japan, there was small but limited conflict on both occasions, all well-controlled.