The Clash of Narratives in the South China Sea 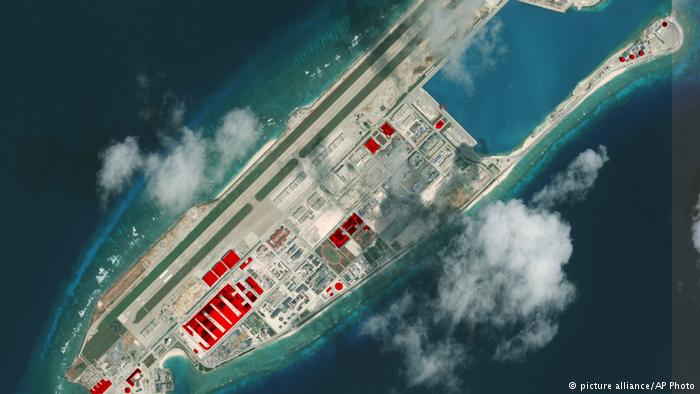 This year saw the emergence of two competing narratives vis-à-vis the territorial and maritime disputes in the South China Sea. This clash of narratives further complicates an already-combustible situation, since concerned parties can’t even agree on the exact nature of the problem, never mind coming up with an effective solution to the disputes.

In a strange twist of events, some Southeast Asian claimant states, particularly the Philippines, have, almost overnight, switched from one camp to the other by forwarding an increasingly China-leaning narrative, which obfuscates facts on the ground. The upshot is the erosion of international norms, which were precisely designed to keep expansionist appetite of revisionist powers in check.

Today, there isn’t only a dispute over resources and territories in the South China Sea, the world’s most important sea line of communications, but also a dispute over who is to be blamed for the uptick in maritime tensions.

On the one hand, the United States and Japan, along other major Western allies, have criticized China for ignoring the Philippines’ landmark arbitration award at The Hague and continued reclamation activities in disputed areas. According to them, China is directly challenging the “rules-based order” in the Asia-Pacific region by unilaterally altering facts on the ground in open defiance of international law and principles, which undergird regional security.

For this camp, China is militarizing the disputes by placing increasingly advanced weapons system, state-of-the-art airstrips, and expanding military personnel on large-scale artificial islands in the high seas. They fear that over coming years, China will have requisite capability to squeeze out other claimant states from the area and impose a de facto exclusion zone across the South China Sea.

Moreover, the United States and its key regional allies maintain that the Philippines’ arbitration case against China transcended the two involved parties, since the ruling directly questioned Beijing’s claim to almost the entirety of the South China Sea basin. Thus, Beijing’s rejection of and persistent non-compliance with the award is a direct assault on the very fabric of the United Nations Convention on the Law of the Sea (UNCLOS), to which China is a signatory. (Though America hasn’t ratified the UNCLOS, thanks to intransigence of isolationists in the Senate, the United States Navy (USN) observes its relevant provisions as a matter of customary international law.)

Japan and Australia, meanwhile, have consistently maintained that the arbitration award at The Hague is “final” and “binding”, thus China is effectively an international outlaw. For them, the only solution to the disputes is if China aligns its claims with international law and adopts the “three no’s”: namely, non-reclamation of disputed land features, non-militarization of occupied features, and non-threatening of smaller claimant states via coercion.

On the other hand, Beijing has put forward a diametrically opposed narrative, whereby the “general situation in the South China Sea is positive.” According to the Chinese point of view, it is working hard with other claimant states, including the Philippines and Vietnam, to “preserve peace” in the area. The source of tensions, Beijing maintains, is “outside parties”, which are supposedly bent on stoking tensions in the area via expanding their military footprint and coaxing and cajoling Southeast Asian countries against China.

For long, China was the sole proponent of this (highly unconvincing and self-serving) narrative, though many Southeast Asian countries rightly feared growing Sino-American rivalry in the area. This year, however, the Philippines, under President Rodrigo Duterte, openly defected to the second camp, maintaining that the situation is stable. To Beijing’s utmost delight, the Filipino leader openly suggested the prospect of “setting aside” the Philippines’ arbitration award in favor of stronger economic ties with China.

As the chairman of the Association of Southeast Asian Nations (ASEAN) this year, Duterte refused to raise the Philippines’ arbitration award, downplayed tensions in the area, and vetoed efforts by fellow claimant states such as Vietnam to rally the regional body against China. The Duterte administration also rejected calls by America, Australia and Japan to pressure China to abide by the arbitration ruling, insisting that it’s the sovereign prerogative of the Philippines to decide whether raise the issue or not in regional fora. Towards the end of the year, Duterte openly rejected any mediation efforts by non-claimant states such as the United States and Japan by insisting that the disputes are “better left untouched.”

Instead, the Philippines, along with other Southeast Asian countries, have placed their bets on negotiation of a Code of Conduct (COC) in the South China Sea. Yet, there are no assurances if the decades-old negotiations over the document will ever produce a legally-binding pact, which will constrain China’s maritime appetite.

Frustrated by the ASEAN’s blatant acquiescence, under the chairmanship of the Philippines, the U.S. and its allies have begun hedging their bets by reviving the long-dormant idea of a quadrilateral “Quad” alliance composed of America, Australia, India and Japan. It’s precisely within this context that we should understand Washington’s increasing usage of the term “Indo-Pacific” in its diplomatic lexicon, which closely tracks the rhetoric of Japan’s Prime Minister Shinzo Abe and commander of the USN’s Pacific Command (PACOM) Admiral Harry Harris, who have been vocal advocates of a more robust pushback against Chinese maritime assertiveness.

Amid ASEAN’s growing irrelevance in shaping the regional security architecture, big powers have stepped into the fray. The result is an even more combustible geopolitical landscape, where status quo power meets revisionist power rather than commonly accepted rules taming misplaced ambition. Thus, the South China Sea disputes could soon enter an even more dangerous phase of rivalry.

South China SeaAsian Security
printTweet
You might also like
Back to Top
CHINA US Focus 2018 China-United States Exchange Foundation. All rights reserved. Disclaimer