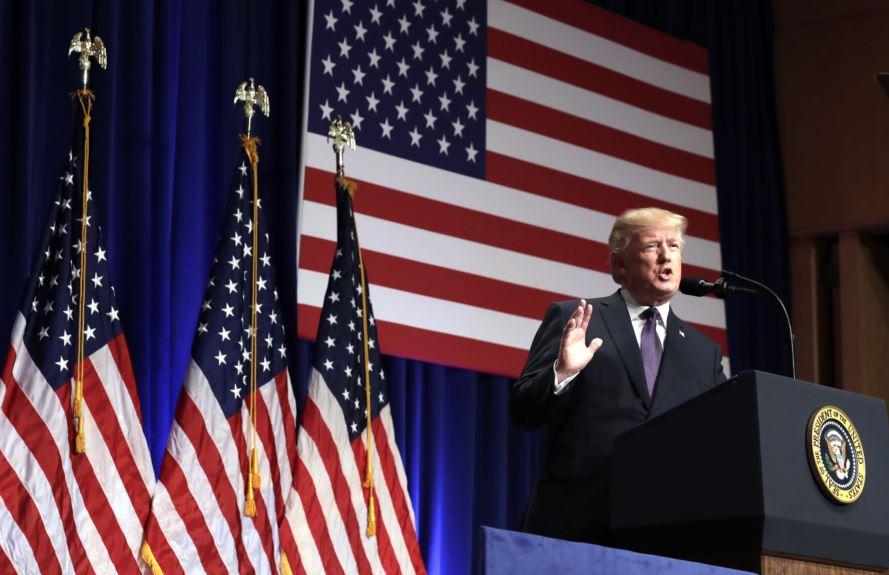 The National Security Strategy (NSS) submitted by the US President to Congress is an extremely important political document. It expresses the administration’s latest national security views and foreign policy guidelines. On the basis of the NSS, various US government departments and agencies will formulate relevant plans and programs of action.

The Trump administration published its first NSS on 18 December, which was naturally given much attention. The report is full of bellicose statements and has met fierce international condemnation. But there has been little opposition inside the US. Democrats offered some criticism, which was mostly nitpicking. For example, some found fault with the absence of an unequivocal condemnation of Russian ‘intervention’ in the US election last year. This has proven once again that there are no real peace factions within the US ruling group. All existing differences are tactical rather than strategic.

The NSS has remained consistent since the end of the Cold War, explaining the lack of substantive criticism of the most recent one. According to the NSS, state power is relative, not absolute; a state does not have abstract power; and power exists only in relations between states on the stage of international competition. The US is the world’s strongest country - the result of power comparison with all the other countries. The Soviet Union’s disintegration left America as the foremost power on the world stage because militarily no other country was able to counter it. The ruling elite in America believed that the world was now in a ‘unipolar moment’ of US hegemony, and that US power would not be easily lost.

US strategic theorists are soberly aware, however, that America’s hegemonic position may be challenged. As early as 1992, the Pentagon’s Defense Planning Guidance recognized that  “[t]here are other potential nations or coalitions that could, in the future, develop strategic aims and a defense posture of region-wide or global domination.” It urged, therefore, “refocus[ing] on precluding the emergence of any potential future global competitor.”

In the 1990s, through the first Gulf War and the barbarous bombardment of Yugoslavia, the US started backing its foreign policy with military force. The 9/11 attack in 2001 offered an excuse for the US to launch a large-scale policy of intervention. The NSS of the George W. Bush administration in 2002 clearly stated that the US would adopt the doctrine of “preventative warfare”, i.e., the US may attack any country considered as posing a potential threat to the US, thus negating the Nuremberg principles on aggressive war. The invasions of Iraq and Libya were both based on the preventive warfare doctrine. When defending the invasion of Libya in 2011, President Obama insisted that the use of force was reasonable even when “our safety is not directly threatened, but our interests and values are”. He added that “ensuring regional security and maintaining the flow of commerce” were among the aims of the operation.

The NSS of the Trump administration, however, includes two important departures from its predecessors. First, it defines China and Russia as revisionist powers that want to change world order and are “challenging US power, influence and interests”. This suggests that the US has entered a new stage in the pursuit of global hegemony and now directly targets China and Russia. Second, the administration has decided to substantially upgrade US military force and openly describes nuclear war as “a viable option”. The report criticizes US “strategic complacency” and failure to acquire “new weapons systems”. The most important break from previous reports is the stress on building up the US nuclear arsenal, describing it as “essential to prevent[ing] nuclear attack, nonnuclear strategic attacks, and large scale conventional aggression”. It shows that the US is preparing to launch nuclear attacks against various opponents, including non-nuclear ones.

Oftentimes, a country’s belligerent posture is a sign and result of its decline rather than strength. A basic fact is that America’s military aggression in the past two decades have not reversed its decline on the world stage. The new NSS may well accelerate the end of the “American century” while bringing about new dangers of war, political conflict, and economic turbulence.

National SecurityDonald TrumpAsian Security
printTweet
You might also like
Back to Top
CHINA US Focus 2018 China-United States Exchange Foundation. All rights reserved. Disclaimer