The Doklam Standoff: Some Basic Facts 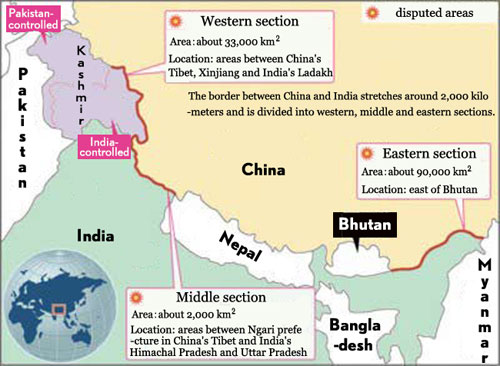 The standoff between Chinese and Indian soldiers on a remote Himalayan plateau entered well into its 2nd month. The Chinese foreign ministry spokesmen delivered one strong wording statement after another, calling for the withdrawal of the Indian troops and warning against miscalculations and unrealistic illusions of the Indian side. The Chinese Defense Ministry spokesmen stressed the resolution of the People’s liberation Army to defend China’s territory, and declared military measures in response to the recent developments. Such strong response from the Chinese government has been rare. The India government, on the other hand, seemed to take the standoff as one of the reoccurring border skirmishes and thought it would come to pass as time goes on. India's Foreign Secretary S. Jaishankar commented in his lecture in Singapore on July 11 that India and China could manage their differences that had arisen from time to time over their contested border.

However, the strong response from the Chinese government indicates that there is something different, which is more provocative and intolerable than before.

Firstly, the simple fact is that China and India have no border disputes on the Doklam plateau, and the standoff occurred in a place where borderline has been established, not contested ever since the Anglo-Chinese Convention Relating to Sikkim and Tibet inked in 1890. It is true that China and India share a long border running for thousands of kilometers, most of which has not been officially demarcated. However, the 220 km border between China and Sikkim had been agreed upon by the 1890 Convention and accepted by the successive Indian governments after the 1947 independence. This is the only border section that both sides have no difference over. On June 16, the Indian troops crossed the established border and forcefully stopped the infrastructure construction on the Chinese side, which led to the current tense standoff. It has been misleading for the Indian narrative to use the term “tri-junction” in referring to the standoff location without clarifying that Doklam is not Indian territory, not even its disputed territory with China. Moreover, the standoff location is at least 2 kilometers away from the tri-junction, a geographic point where the three countries’ borders converge. China would perceive the Indian intrusion as an attempt to expand disputes into uncontested area, which could only make the whole border issue more difficult to solve.

Secondly, India’s claim that New Delhi is responsible to assist Bhutan in defending its territory has neither legal basis nor moral sincerity. Bhutan is by no means a treaty ally of India. It signed a Friendship Treaty with India in 1949, in which “Bhutan agrees to be guided by the advice of the Government of India in regard to its external relations.” The Treaty was updated in 2007 and the revised article replaced the request “to be guided” with the request to “cooperate”. It stipulates that the two governments “shall cooperate closely with each other on issues relating to their national interests”. And neither “shall allow the use of its territory for activities harmful to the national security and interest of the other”. Even though Bhutan has agreed to “cooperate”, nothing in the treaty justifies India’s cross border intervention. We all know that Bhutan is a sovereign state, a close and friendly neighbor to both China and India. Of China’s 14 land neighbors, Bhutan is the only one who has no diplomatic ties with China, and one of the two who have not settled land border disputes with China (the other being India). Bhutan has made territory claims conflicting with those of China. Both sides have held 24 rounds of negotiations since 1980s and achieved common understanding on the basics of their borders. However, without India’s endorsement, Bhutan cannot sign a border agreement with China. And without an India endorsed border agreement, Bhutan cannot conclude negotiations on diplomatic relations with China. India, as a founding state of the Non-Aligned Movement, whose core principles include national independence, state sovereignty, and opposition to bloc politics, knows too well that intervention in the name of a third party does not conform to its proclaimed foreign policy. If transgressing each other’s territory to defend a third party were justifiable, how would India respond in case Chinese troops intervene to defend India’s neighbors, at locations where India has territorial disputes with them? In this regard, it is safe to say that India is harming Bhutan’s national interests, and its “cooperation” with Bhutan is only for India’s national interests.

Thirdly, Doklam, where the Indians crossed the border, has been in China’s actual control and administration. Chinese PLA units take regular patrols. Chinese local government builds roads and facilities to support living and economic activities. Chinese herdsmen bring their cattle to the grasslands every summer. And the Bhutanese herdsmen also bring their cattle to the area only with endorsement of Chinese local governments, and by paying “grass tax”. China has every right to build roads, houses and other facilities on its own soil, over which it exercises actual control.

Now we have the basic facts: China and India has no disputes over the Sikkim section of their border. India’s border transgression cannot be justified with legal or moral reasons, either for claiming its own territorial rights, or for supporting a third party’s disputed territory claim with China. China has been exercising actual control and administration over the aforementioned territory and building facilities for living and economic activities for years.

Therefore, when Indian External Affairs Minister Sushma Swaraj blamed China for “unilaterally” changing the status quo in Doklam in her speech at the Rajya Sabha on July 20th, we see all the key elements in the status quo are being toppled over by the Indian side: uncontested border disputed, China’s actual control disregarded, China-Bhutan border negotiations impeded, and even the Sikkim-Tibet border complicated with Indian military build up. To be frank, it is the illegal intrusion into Chinese territory that has presented the most disruptive factor to the status quo. The Doklam standoff is not one of the numerous border incidents both sides have acquainted themselves to. It is unprecedented and of a different nature. That is why the Chinese government is taking a very strong stance in requesting an unconditional Indian withdrawal. There is no room for negotiations before a wrongdoing is corrected and status quo resumed. New Delhi should understand the severity of the situation and handle the issue with more sensitivity and prudence.

Prime Minister Modi once commented on the fact that for 4 decades, not a single bullet had been shot along the India-China border, we all have to work harder to keep the statement true in the future.