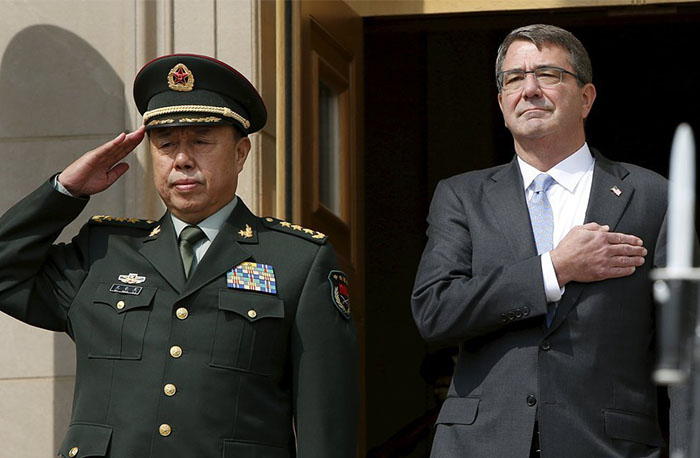 If you have been paying attention to headlines about the growing tensions between China and the United States over Chinese island-building efforts in the South China Sea, you may find it hard to believe that the two geopolitical rivals would also be entertaining each other’s military commanders. But this is precisely what is going on. This week, the Pentagon is hosting General Fan Changlong, the deputy chairman of the Central Military Commission (CMC). In the hierarchy of the Chinese military, Gen. Fan is the most senior commander (Xi Jinping, the chairman of the CMC and the commander-in-chief, is not involved in the day-to-day affairs of the People’s Liberation Army, the PLA). Because the Chinese Minister of Defense occupies a largely symbolic position, Gen. Fan is the real Chinese equivalent to Ashton Carter, the U.S. Secretary of Defense.

Gen. Fan is the fourth senior PLA commander to visit the Pentagon since 2013. In the last two years, three of Fan’s colleagues, Defense Minister Chang Wanquan, the PLA General Chief of Staff Fang Fenghui, and the PLA Naval Chief Admiral Wu Shengli, have also been the guests of the U.S. Department of Defense (DoD). In all likelihood, Gen. Fan’s American tour reciprocates the visit to China by Chuck Hagel, then the Pentagon chief, in 2014.

To be sure, Sino-U.S. military-to-military (mil-to-mil) exchanges have their critics in both countries. In the U.S., China-hawks see little value in such activities. Instead of moderating the assertive behavior of the Chinese military, they believe that mil-to-mil exchanges may create a facade of friendship and amity between the two armed forces that are actually preparing to fight each other. Even worse, they are afraid that visiting Chinese generals may gain invaluable insights into the U.S. military during their tours of American military installations and units. As a result, the U.S. Congress has imposed a series of restrictions on U.S.-China mil-to-mil exchanges.

Ironically, Chinese hardliners have almost identical criticisms of these exchanges and, since the mid-1990s, when these activities began, have worked hard to ensure that mil-to-mil exchanges are limited to symbolic gestures.

Given the political opposition on both sides to U.S.-China mil-to-mil exchanges, it really requires the top political leadership in both countries to take the necessary risks and invest enormous political capital to continue these programs. In the U.S., Presidents Bill Clinton, George W. Bush and Barack Obama have all demonstrated consistent commitment to U.S.-China mil-to-mil exchanges, often overcoming opposition from Congress and even the Pentagon (for instance, former Defense Secretary Donald Rumsfeld was one of the fiercest critics of these exchanges). In China, President Xi’s predecessors were less successful in persuading the Chinese military to take advantage of the opportunities to develop potentially constructive ties with the U.S. military. Consequently, such exchanges did not deliver really satisfactory results.

Since becoming the PLA commander-in-chief, President Xi has apparently decided that a more proactive stance on U.S.-China mil-to-mil exchanges is in China’s own interest. This can be seen in his speech to the PLA Conference on military diplomacy in January this year. Among other things, he calls for “innovating our thinking, liberating our mindset, and broadening our vision” in conducting military diplomacy. Thanks to his success in consolidating his authority inside the Chinese party-state, Xi is able to provide greater political support for mil-to-mil exchanges with the U.S.

One important achievement credited to Xi is the progress on establishing mechanisms to avoid accidental collisions between the two militaries. Back in 1998, the U.S. and China signed the Military Maritime Consultative Agreement (MMCA) to prevent such collisions in the air and the sea. Unfortunately, the MMCA was honored only in breach. In 2001, a U.S. naval surveillance plane and a Chinese naval jetfighter collided in the skies over Hainan Island, resulting in a weeks-long standoff and serious deterioration in U.S. China relations. In recent years, Chinese jetfighters and naval warships frequently used dangerous tactics, American surveillance planes and vessels operating close to Chinese territorial waters and airspace.

However, in the U.S.-China summit in Beijing last November, Presidents Obama and Xi reached two important agreements on notification of major military activities and a set of rules governing encounters between the U.S. and Chinese military planes and ships. What is encouraging about these two agreements is that President Xi proposed them to President Obama when they first met in their informal summit in June 2013 in California.

The tortuous history of U.S.-China mil-to-mil exchanges shows why such programs are vital safety valves in moderating tensions between the U.S. and China. When carried out professionally and constructively, they allow senior military officers on both sides to have opportunities to engage each other in substantive and even contentious discussions about their missions, strategies, and threat assessment. To be sure, such exchanges will be limited by their lack of trust and by the political restrictions imposed on them. Yet, these activities can occasionally bear fruit and help moderate tensions. For instance, the timing of Gen. Fan’s visit coincides with the heated controversy over China’s island-building project in the contested waters in the South China Sea. And we can expect this issue to take up much of the discussion between Gen. Fan and his American counterparts.

So there is both ground for optimism and caution in sustaining U.S.-China mil-to-mil exchanges. We can count on the pragmatist instincts of American and Chinese political leaders to continue these programs because they do not want to allow their geopolitical rivalry to escalate into an overt dangerous cold war. But we also need to be realistic and cautious because skepticisms about the utility of these activities are not entirely unfounded. To build political support for productive U.S.-China mil-to-mil exchanges, such programs will have to produce real results, and soon.