Working Toward a Neutral, 'Sovereign' Korea 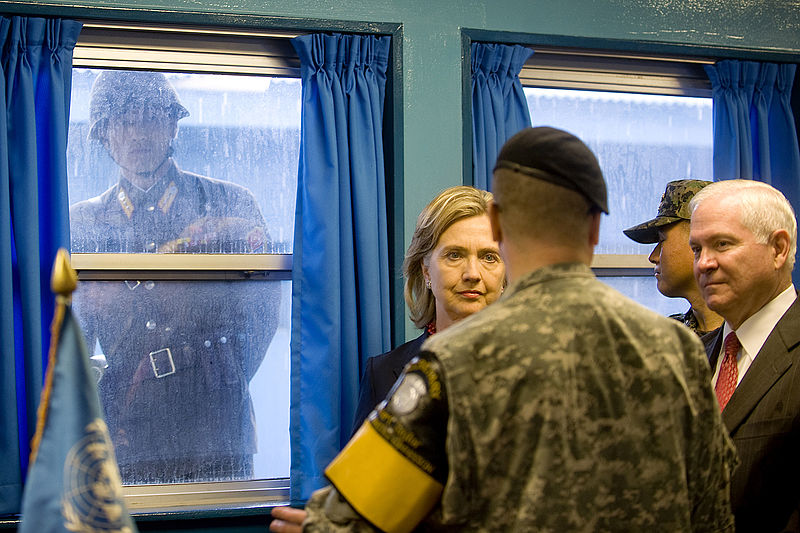 A North Korean soldier looks in through the window of the T2 building as Secretary of State Hillary Clinton and Secretary of Defense Robert M. Gates tour the Demilitarized Zone in Korea on July 21, 2010. (Photo: U.S. Department of Defense)

The world changed so much between the years of 1989 and 1991 that it can be easy to overlook developments that, though important, lacked the grandeur of an empire’s collapse or a nation’s rebirth. One such event was the simultaneous admission to the United Nations of both North Korea and South Korea, which had previously held only observer status. When Security Council Resolution 702 was passed by the General Assembly on September 17, 1991, both states were admitted as full members.

Those following today’s tensions between an isolated North Korea, its neighbors, and the U.S. might imagine that this was an achievement for the North, gaining much desired recognition by the international community just as other Leninist regimes were falling left and right. This would be wrong however. In fact, the “two separate admissions” path had been a South Korean proposal, long opposed by the North in favor of a joint U.N. delegation from a hypothetical Korea-wide confederation. An ascendant, booming South, enjoying improved ties with China and the soon-to-dissolve Soviet Union, was able to secure its favored plan at the Security Council, irrespective of once-significant Northern protests.

Ironically, it could thus be argued that North Korea’s modern period of isolation really began with this formal inclusion into the international system. Of course, other individual factors were to be just as important, such as the collapse of the socialist bloc, the death of Kim Il-Sung and the resulting fears over regime stability, the decision to pursue nuclear weapons, and the ongoing rise of the Juche ideology, emphasizing “self-reliance,” in state discourse. But it was this final defeat of Kim Il-Sung’s proposed “Democratic Confederal Republic of Koryo” that marked a more fundamental kind of transformation. North Korea was accorded diplomatic recognition and a legal personality just as its raison d’être — political reunification of the Korean Peninsula and of uri minjok, “our race” or “nation” — became a vastly more distant goal than ever before.

In many ways, the current nuclear stand-off between North Korea and the U.S. can also be traced back to this key transitional period. As political and diplomatic avenues for the promotion of its reunification goals grew increasingly unlikely, military power (as embodied in Kim Jong-Il’s policy of Songun, or “military first”) became the only viable path to influence the practical state of affairs. Today, that seems more the case than ever, as the North’s GDP is 50 to 100 times smaller than that of the South and it finds itself increasingly isolated even from China, which has just enacted tough sanctions in line with the recent Security Council Resolution 2371 promoted by the Trump Administration.

While it is a positive sign for the members of the Security Council to be able to coordinate policy toward North Korea, there is little hope for any sanctions regime, however strict, to induce denuclearization. Even during the disastrous famine of the 1990s, the regime continued putting scarce resources into nuclear development to pursue its twin aims of eventually reunifying the Peninsula on favorable terms and expelling American forces from the South. Even if forced to undergo another such economic and humanitarian calamity, there is no indication that the result will not just be more human-level suffering for the North Korean people, while the regime continues its policies.

A military option aimed at the North’s nuclear program or ICBM capabilities would be far more disastrous, of course. Even a limited strike could lead to a devastating war and untold civilian casualties. The “sticks” available to the U.S. thus do not seem very promising, even with China’s assistance in enforcing sanctions. What about the incentives it could offer in order to secure some kind of deal?

China and Russia have proposed a “freeze for freeze” deal in which North Korea would suspend nuclear weapons development and/or missile testing in exchange for a suspension of U.S. military exercises in South Korea. While this idea is worth pursuing, even if successful it would not change the basic calculus of the North’s nuclear capabilities and its perception of an existential threat from the U.S.’s nearby military presence. Nor has it found much enthusiasm in statements by either America or North Korean representatives.

On the other hand, a peace treaty with the U.S. and a formal end to the Korean War, along with diplomatic recognition (which America has continued to withhold from the North, effectively denying its existence as a state), have long been key desiderata for the North Korean regime. Successive U.S. administrations have refused to consider offering these benefits without preliminary indications of “good faith” in the form of concrete steps towards denuclearization and the like. To directly propose treaty negotiations with North Korea would, however, be a promising step forward for the Trump Administration, and away from the brink of an unnecessary conflict.

Yet the key sticking point to any treaty negotiations, or even defining the contours of any “freeze for freeze” deal, will be an issue at once more abstract and more fundamental than this sort of quid pro quo. What is really at stake for North Korea in its pursuit of and negotiations over nuclear weapons is sovereignty. That concept refers in part to each state’s right of non-interference by external powers and secure control of its own territory, as guaranteed in the U.N. Charter, but it also refers to the subjective sense among a “People” that they are masters of their own space and of their own destiny.

In North Korea’s case, the concern for sovereignty is especially significant because it extends beyond the mere questions of regime survival or the control of currently held territory: Rather, it refers to the imagined community of the entire “Korean nation” on both sides of the DMZ. America’s military presence in the South is portrayed by the North less as a threat to its own government than as a foreign incursion into the space of the Korean people. The key motivation behind proposals like Kim Il-Sung’s confederated republic plan was that they would establish a unified political and military policy for both Koreas which would, in turn, ensure Korea’s independent course vis-à-vis the U.S. and its Cold War adversaries.

For decades, South Korea rejected Northern overtures along these lines both because it viewed the U.S. security relationship as vital and because it preferred a different model of engagement, focused on social and economic ties. The North wanted to preserve two different socio-economic systems while coordinating a joint foreign policy.

In fact, as various commentators have suggested, establishing a geopolitically neutral “federation” among the Koreas actually would be a viable path of compromise. It would assuage Chinese fears of war, regime collapse, and regional instability, South Korean concerns over the risk of unilateral Northern aggression, the North’s existential fear of U.S. regime change efforts, and also serve U.S. interests by ending the Chinese-North Korean security relationship. It would also, hopefully, set the stage for increasing exchanges between the Koreas, the gradual economic “opening up” of the North, and perhaps even ease the way for true reunification at some later date.

Learning from East and West Germany’s experiences, the two Koreas would thus move closer to peaceful coexistence based on a mutually-agreed framework of legal and political relations, rather than on the initiatives of outside superpowers or fleeting gestures of “goodwill.” A formally-agreed federation plan of some kind — even just a joint initiative to study the idea — would also help lock in other agreements against future shifts in political winds on both sides of the DMZ. At the same time, treaty negotiations should work towards the complementary deal of full or significant denuclearization in return for full or significant American military withdrawal from the South.

Most states are either recognized or denied recognition by their peers. North Korea stands as an example of a state that was, in its own view, “misrecognized” by being accorded a legal personality that did not encompass its true object of identification, the whole Korean minjok. This is not some exotic or inherently fascist perspective; it is simply a fervent variant of the extremely common nation-state ideal.

Establishing a Korean Federation committed to neutrality, autonomy, and rejecting military solutions would calm the North’s paranoia over foreign threats to the minjok’s sovereignty while, in the long run, transforming it via interactions with the wealthy, more populous, and solidly democratic South. Some modern form of this still officially supported “federation formula” may be the key to peace.