Prospects for Peace After the Third Inter-Korean Summit 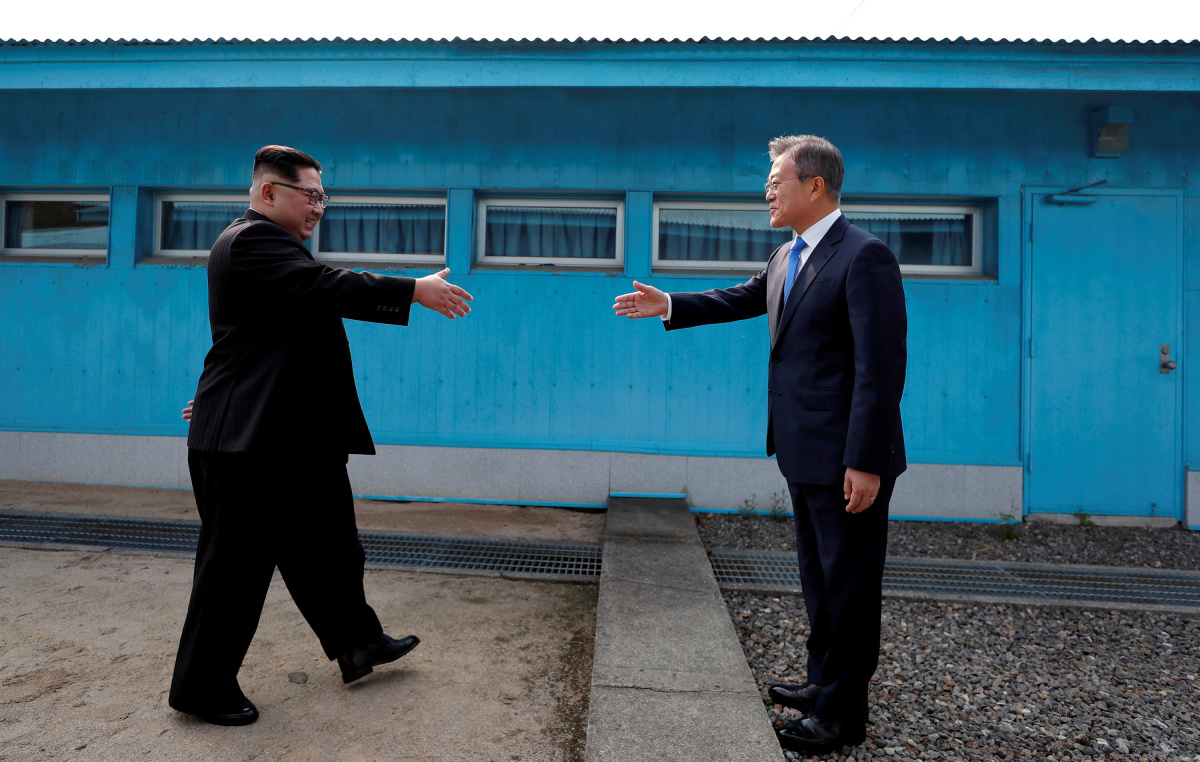 On April 27, 2018, South Korean President Moon Jae-in and North Korean leader Kim Jong Un started to write a potential new chapter in the history of inter-Korean relations. With the historic meeting last week, Kim Jong Un became the first North Korean leader to step foot in the South and the first to accept an inter-Korean summit outside of Pyongyang. The signing of the Panmunjeom Declaration for Peace, Prosperity and Unification of the Korean Peninsula has given the Korean people a new reason to be optimistic about the future.

The two Korean leaders declared that “there will be no more war on the Korean Peninsula and thus a new era of peace has begun.” Reconciliation, peace, prosperity and denuclearization were the main topics of their talks. According to the principle of determining the destiny of the Korean nation of their own accord, the two Koreas committed themselves to develop inter-Korean relations, encourage more visits and contact at all levels, resume family reunions, improve the connection and modernization of railways and roads, and to alleviate military tensions. Moon and Kim also agreed to establish a joint liaison office in the North’s border city of Kaesong, and on a visit of Moon to Pyongyang next fall.

The summit’s atmosphere was convivial and at times even strangely playful: Kim apologized to Moon for having interrupted his morning sleep because of the North’s missile tests, and Moon responded by saying, “Now I can sleep in peace.” The talks were characterized by a frankness between the two parties, such as when Kim acknowledged that all sides bear responsibility for the failure of the past agreements or when, talking about roads in North Korea, he said “it will be very embarrassing” when Moon sees the state of the North’s transport infrastructure during a possible upcoming visit. It is not commonplace for a member of the Kim family to publicly admit any failure or deficiency in North Korea. Nor is it commonplace for one to show himself through unfiltered images in a live broadcast or to participate in a joint press conference in front of the international media. This says a lot about the different style of rule of Kim Jong Un in comparison to his father, Kim Jong Il.

All of these elements correlate with the policy line that Kim Jong Un is pursuing, the byunjin line, which is based on the parallel attainment of two strategic goals: the development of the nuclear and missile program and the country’s economy. During his 2018 New Year speech, Kim Jong Un declared that North Korea has achieved the first goal, so “a breakthrough should be made in re-energizing the overall economic front this year.” Furthermore, he also said that he wished to “improve the frozen inter-Korean relations.” The fil rouge that links these pieces is clear: being a now de facto nuclear power allows North Korea to focus on its economy; however, sanctions are preventing the country from obtaining aid, foreign investments and the expertise needed to foster the economy.

Better relations with Seoul could help Pyongyang overcome these difficulties. The moratorium on missile and nuclear tests, the absence of harsh rhetoric from the North Korean media, and the establishment of a direct phone line between Kim and Moon’s offices all demonstrated that this time, the North was willing to commit to negotiations, even before the summit.

On the other side of the 38° parallel, Moon Jae-in has also adopted a different approach in dealing with North Korea than his two progressive predecessors, Kim Dae-jung (1998-2003) and Roh Moo-hyun (2003-2008). As soon as North Korea accepted his invitation to participate in the Winter Olympics in Pyeongchang, Moon Jae-in began an intense diplomatic outreach effort with both the North and the U.S., aimed at improving inter-Korean relations and realizing denuclearization of the North. The “positive” outcome of the inter-Korean summit has shown that Moon has been able to build a valid strategy upon the lessons learnt from the previous summits in 2000 and 2007. He has been very transparent with the South Korean public about his moves towards the North, even to the extent of creating an official website for the summit. The South Korean president has sought to gain the support of the international community and to preserve his country’s relations with the United States at all times. Finally, Moon made no “preemptive economic concessions to North Korea before the summit,” as noted by Professor Antonio Fiori.

Moon’s strategy does have some risks, however, which are related to the issue of denuclearization. Not only do Pyongyang and Washington have different ideas of what denuclearization means, but Moon and Trump may also not be on the same page on this issue, or others.

According to the Panmunjeom Declaration, the two Korean leaders committed to sign a peace treaty to end the Korean war this year. This represents for them a “historical issue that must not be delayed any further.” In order to achieve that, they will also pursue trilateral or quadrilateral meetings involving the two Koreas, the U.S. and China. By setting this goal, Moon Jae-in has thus agreed to the possibility that one of the top security priorities of Kim Jong Un’s regime is pursued before the latter’s nuclear arsenal is dismantled.

It is not the first time that the two Koreas have made this kind of commitment and it is hard to imagine how they will manage to work through all of the necessary steps to reach that goal, including convincing the U.S. to remove its troops from the peninsula, as Beijing will probably demand. However, the symbolic value of the proposal remains, as well as the symbolic value of confirming the two Koreas’ “common goal of realizing, through complete denuclearization, a nuclear-free Korean Peninsula,” in a phased manner. This perspective is different from that of the United States. Washington has called for the complete, verifiable, and irreversible dismantlement (CVID) of the North's nuclear program. The challenge for Moon is now to find common ground with the U.S. on the issue of the denuclearization, as he has linked that to the improvement of relations with the North. The risk is that if President Trump and his administration do not change their policy approach toward the nuclear issue, Seoul will have to decide whether to continue to engage with Pyongyang or to prioritize relations with Washington.

Despite the complexity of the case and the many issues that need to be discussed among the different actors, the inter-Korean summit has represented an important first confidence-building step between the two Koreas. The symbolic and emotional value of the summit should not be underestimated. Hopefully, it will mark the starting point of a long and incremental process towards peace on the Korean peninsula.

Korean PeninsulaNorth KoreaSouth Korea
printTweet
You might also like
Back to Top
CHINA US Focus 2018 China-United States Exchange Foundation. All rights reserved. Disclaimer