A “Risk Management Roadmap” to Denuclearization 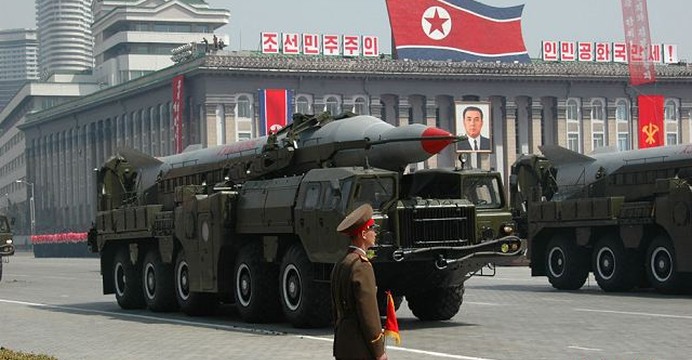 As Kim Jong-un and Donald Trump prepare to meet in Singapore next week, the big question is whether the two parties will be able to have a constructive discussion about denuclearization (“of the North,” as Washington would have it, or “of the Korean Peninsula,” as Pyongyang would prefer).

Kim Jong-un, during his first meeting with Chinese President Xi Jinping last March, clearly defined denuclearization as an issue that can be resolved if the U.S. and South Korea take “progressive and synchronous measures” in response to efforts made by North Korea. On the other side of negotiating table, the United States has in mind the “complete, verifiable and irreversible dismantlement” of North Korea’s nuclear program — the so-called CVID model. According to this model, only after Pyongyang takes permanent steps to end its nuclear program will it receive sanctions relief, as was affirmed by U.S. Defense Secretary James Mattis on the sidelines of Shangri-La security summit in Singapore.

While the first idea of denuclearization calls for a long-term phased process, the second envisages a more immediate and definite solution. However, the position of the U.S. administration is not straightforward. Some confusion has been caused by the varying and even contrasting statements made by national security adviser John Bolton, Vice President Mike Pence, and President Trump. The U.S. president himself has implied some changes in the U.S. position in recent days. Indeed, he has recognized that achieving a nuclear deal with North Korea (his goal for the summit with Kim Jong Un) might take more than one meeting. “It’s going to be a process,” Trump said.

An alternative proposal for “a technically-informed roadmap for North Korea’s denuclearization” was released by the Center for International Security and Cooperation of Stanford University (CISAC), this May, authored by Siegfried S. Hecker (the only “Westerner” who has been allowed to visit the North’s uranium enrichment facilities several times), Robert L. Carlin, and Elliot A. Serbin.

Before providing the details of the roadmap, the authors warn Washington that “it is unimaginable that Kim will agree” to the current demand for CVID denuclearization, similar to that discussed in negotiations with Libya. Instead, the U.S. “must be prepared for a phased approach” — the approach Kim Jong Un seeks. They also suggest that the idea of shipping the nuclear devices out of North Korea is dangerous, stating that “the weapons must be dissembled by the people who assembled them.” Furthermore, according to the researchers, the “huge trust deficit between the two parties” is likely to encourage Pyongyang to maintain an escape route in any agreement produced by the meeting.

As the CISAC report outlines, over the last seventeen years, previous U.S. administrations have implemented risk avoidance strategies in dealing with North Korea. For this reason, the idea of allowing the Kim regime to retain a civilian nuclear program and a peaceful space program — both highly valued by Pyongyang for practical and symbolic reasons — has never been popular in the White House. Because this strategy has failed to achieve cessation and/or reversal of the nuclear and missile programs, the report urges the adoption of a risk management approach to denuclearization, which would distinguish between assets and activities that pose the greatest risk and those that can be managed. This is based on an awareness that, firstly, the North Korean regime will never renounce all of its nuclear technologies and secondly, that some of those technologies “aren’t a problem.”

In their report, the CISAC research team identifies eight general categories (nuclear weapons, nuclear personnel, nuclear tests, missiles tests, plutonium, fusion fuels, uranium enrichment, and exports of nuclear and missile technology) and twenty-two facilities or activities related to North Korea’s nuclear and missile programs. It then lays out a risk-management roadmap based on a three-phase process, over a ten-year time frame. The first year is the “halt” stage, with the “roll back” stage in years two to five, and the “eliminate” stage in years six to ten. The actual duration of each phase would depend upon political developments. The strength of this approach is that while the parties go through the different steps of the roadmap, they would also build trust and interdependence: two essential ingredients of any effective solution to the nuclear issue, because they reduce North Korea’s threat perception.

The first “halt” stage focuses on facing the most immediate risks, so the proposal urges an end to nuclear tests; the tests of intermediate or long-range missiles; the production of plutonium and highly enriched uranium; and the export of nuclear weapons, materials or technologies. The researchers argue that adequate verification measures would manage the risk posed by North Korea retaining some parts of its nuclear program for peaceful and civilian purposes. This would also facilitate the transition of relevant personnel to civilian activities, assisted by South Korean and American scientists.

In the second stage, nuclear weapons must be declared and reduced, the 5MW reactor dismantled along with the tritium reactor and hot cells, and the covert centrifuge facilities declared and inspected. North Korea must then join the Missile Technology Control Regime (MTCR).

The last phase includes the elimination of nuclear weapons, uranium, plutonium, and the centrifuges; the destruction of tunnels and missiles; the dismantlement of test infrastructures and reprocessing facilities; and the joining of the Comprehensive Nuclear-Test-Ban Treaty (CTBT) and the Nuclear Non-Proliferation Treaty (NPT).

The authors stress that negotiations on the specific steps to implement the roadmap will be critical, but conclude that the climate of dialogue in the last six months between the two Koreas and the U.S. is conducive to the realization of tasks “that were unimaginable for decades.”

If the U.S. participates in further dialogue, considers a phased and incremental process like CISAC’s proposal, and provides compensation to the North each time it commits to go one step further on the path toward denuclearization, North Korea might finally begin to feel that its security “rests on something other than nuclear weapons.”