2019 Hong Kong Forum on U.S.-China Relations: WHAT NOW WHAT NEXT

In an effort to build on the forward momentum of bilateral discussions following the G-20 Summit, the China-United States Exchange Foundation (CUSEF) and the China Center for International Economic Exchanges (CCIEE) co-hosted the “U.S.-China Trade & Economic Relations: What Now, What Next” forum in Hong Kong on July 9-10, 2019. Gathering more than 40 past and current major stakeholders and influencers in the China-U.S. relationship, forum attendees from the United States, China, and other Asia Pacific countries came together to candidly address the challenges facing China-U.S. relations, as well as to explore new and creative ways to find a consensus on shared issues.

CUSEF and CCIEE share the belief that constructive dialogue and diverse exchanges are essential to advancing the relationship between one of the world’s most developed nations and its most populous, fast-developing nation. “Our discussions will not only be useful and give inspiration, but also will encourage people to take an extra step in support of this very important U.S.-China relationship,” Tung Chee-hwa, founder and Chairman of CUSEF, stated in his opening remarks,. “I also hope that at the end we can come away more confident about the future.” 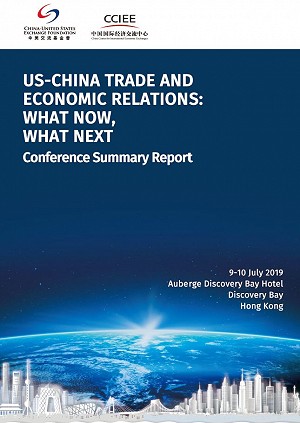