How to avoid the "fourth Taiwan Strait crisis" from triggering a direct conflict between China and the United States?

Speaker of the House Pelosi's visit to Taiwan directly triggered the "fourth Taiwan Strait crisis", making the Taiwan question the most pressing issue in China-U.S. relations again. The importance of a joint project by researchers from both the Shanghai Institutes for International Studies (SIIS) and the U.S. Institute of Peace (USIP) was underscored by the high level of concern in policy and research circles about the possibility of a direct military conflict between China and the United States in the Taiwan Strait, although the results of this study were actually completed quite some time before Pelosi's visit.

The project, "China-U.S. Signaling, Action-Reaction Dynamics on the Taiwan Question: A Preliminary Examination", studies signaling and action-reaction dynamics between China and U.S., with a focus on Taiwan, during the first ten weeks of the Biden administration. The project was prompted by the desire to understand how China and U.S. interpreted each other's signals on the Taiwan question and responded to them in order to help avoid unintentional escalation and unintended conflict on both sides.

The specific methodology of this joint study can be found in the respective reports released by SIIS and USIP, and the SIIS team would like to make a few further points here, taking into account the project's findings and Pelosi's visit to Taiwan.

First, we found through our research that both sides interpreted each other's signals on Taiwan in conjunction with each other's policies and actions in other areas. The Chinese emphasized they believe that other aspects of the Biden administration’s China policy—whether human rights, Hong Kong, or the stance on the Belt and Road Initiative—not only exacerbate bilateral distrust, but also are connected and complementary to the administration’s Taiwan Strait policy and are an intrinsic part of Biden’s entire “containment policy” toward China. These policies further confirm the perception that the Biden administration’s real policy objective is to “contain China with Taiwan”. The U.S. side also observed that understanding signaling and reactions in the US-China relationship requires looking beyond one specific issue area, because actions in one area (or toward another country) affect the way the two countries view each other in other policy areas as well. The broader context of the relationship informs each country’s actions and perceptions and thus needs to be taken into account. How the United States approaches China, including assessing China’s actions vis-à-vis Taiwan, is also impacted by broader actions such as China’s actions affecting Hong Kong or toward Europe.

Second, we found through our research that both sides receive and interpret each other's signals in a complex environment. The Chinese believe that although both sides had taken actions that seem closely connected according to the timeline, one side’s actions have not necessarily been taken in direct response to the behavior of the other side. Some actions are routine policy implementations that should not be overinterpreted. The U.S. side has also warned against over-interpretation. At the same time there are different interpretations of the same action within each side. For example, Admiral Philip Davidson, the former commander of the US Indo-Pacific Command, testified before members of the Senate Armed Services Committee and said, “Taiwan is clearly one of their ambitions…I think the threat is manifest during this decade, in fact, in the next six years.” In this regard, China and the U.S. each have different internal interpretations. Some Chinese thought Davidson’s statement was an important policy signal and represented the concrete views of the US military regarding the Chinese mainland’s military actions toward Taiwan, while others believed that it was not important and was more representative of Davidson’s personal opinion. On the U.S. side, one described the statement as a “routine briefing”, while another asserted the statement was a “big deal” for both the U.S. and China, because it was the first time a commander of the United States Indo-Pacific Command provided an estimate for a specific time period within which “a Chinese invasion of Taiwan could happen”.

Third, we found through our research that there are significant differences in how the two sides view the joint U.S. actions with "third parties”. The most notable example of this is the US-Japan 2+2 statement on March 16, 2021 that touched on Taiwan. From China’s perspective, these moves illustrate the Biden administration wants Japan to play a larger role in the Taiwan question. Given the history of China-Japan relations and Japanese colonial rule of Taiwan, the Chinese side is extremely sensitive to the prospect of a more prominent Japanese role in the United States’ Taiwan Strait policy. Thus, Beijing views the Biden administration’s move to have Japan play a greater role in Taiwan-related issues as a reflection of either the absence of “real China hands” on the Biden team, resulting in a lack of understanding about the sensitivity and importance of the Taiwan question in China-US relations, or a lack of desire to bring China-US relations back on a stable track. While the U.S. side saw its discussions with American allies about a Taiwan contingency, such as the US-Japan 2+2 statement regarding Taiwan, as a response to Beijing’s pressure on Taipei and consistent with responsible alliance behavior.

Fourth, we find through our research that there are significant differences in the interpretation of policy signals between the two sides, and that political struggles within the U.S. make the process of transmitting and receiving policy signals more difficult for both countries. The influence of the U.S. Congress on foreign and security policy has risen. Especially in recent years, Congress’s China policy has been more consistently uncompromising than it was a decade ago and its increased support for Taiwan has been unprecedented. Congress has continuously broken through restrictions imposed by the administration on U.S. policy toward Taiwan and has strengthened relations with Taiwan. The growing risk that Congress will undermine the limited consensus reached by China and the United States has already evoked high levels of unease in Beijing. Moreover, the current political polarization in the U.S., the Biden administration’s strong need for congressional help on key items on its domestic agenda, and the distrust created by the Trump administration in the president’s use of diplomatic and security powers will give Congress greater power to intervene in US diplomatic and security affairs. Additionally, Congress’s approach to decision-making is clearly different from that of the executive branch. Policy signals sent by Congress have always been diverse, vague and radical, which is not good news for an issue as sensitive and dangerous as the Taiwan question. The serious impact of Pelosi's visit to Taiwan on China-U.S. relations confirms our view.

Based on the above views, we put forward three policy implications in the SIIS report. First of all, restart mechanisms for in-depth dialogue, which is extremely important to maintain a stable and predictable relationship between the two great powers.[2] Just because one or more dialogues do not achieve one party’s desired result does not mean that they are not needed. Dialogue mechanisms are difficult to establish but easy to abandon. Currently, the suspension of dozens of dialogue mechanisms between the two governments is not only a waste of resources but also detrimental to the overall stable development of bilateral relations. Relevant dialogue mechanisms should be restarted as soon as possible.

While it is unfortunate that our report was not released before Pelosi's visit to Taiwan, it appears that the "fourth Taiwan Strait crisis" triggered by the visit may only be just beginning. In the coming period, it is crucial for both China and the United States to avoid miscalculations at the strategic and tactical levels due to signal reception and interpretation that could lead to direct military conflict between China and the U.S. in the Taiwan Strait. We hope that our report will be of value to both policy and research communities. □

[2] The recommendation was made prior to the visit. The visit significantly changed the political climate between the two countries. The fourth Taiwan Strait crisis, on one hand, justified our previous proposal and, on the other hand, added new difficulties to the re-engagement between the two sides. 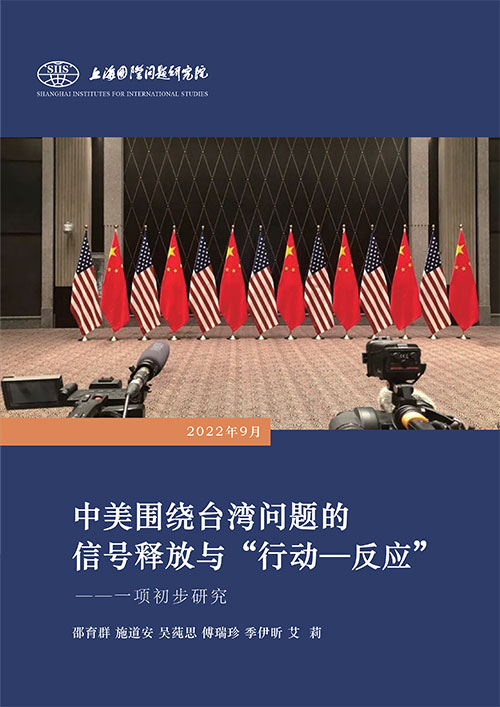