The Deception and Detriment of Decoupling 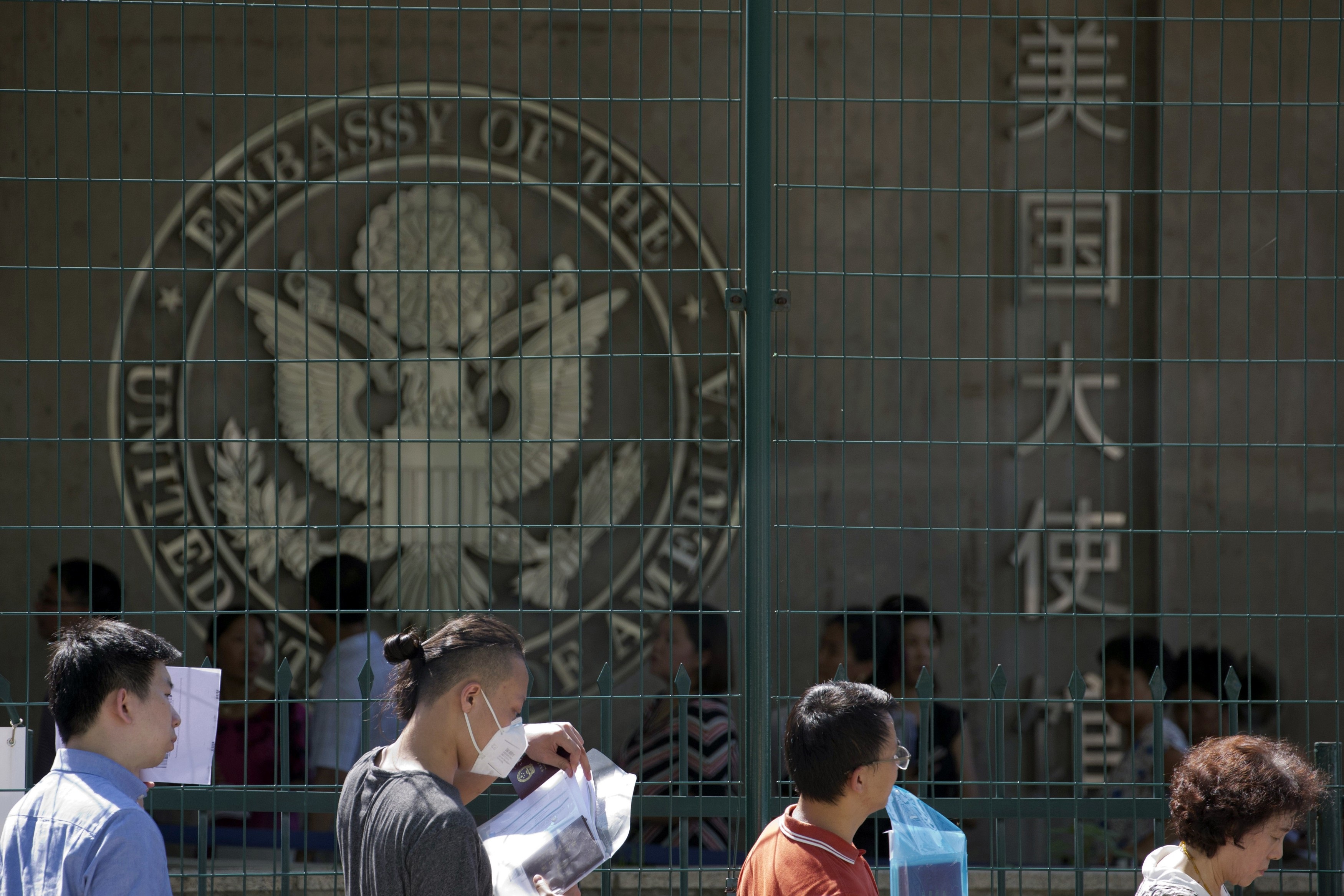 As the United States insignia was stripped and the American flag was lowered over the U.S. consulate in Chengdu, China, in late July, a bridge that had connected America with western China for 35 years was severed. Soon thereafter, the U.S. embassy in China released a farewell video on social media in which the departing U.S. consul general in Chengdu, Jim Mullinax, addressed the Chinese people with the moving words: “We will always remember you … and our bond will continue.”

Similarly heartfelt sentiments of remembrance were also expressed in farewell videos by the consul general in Shanghai, Sean Stein, in August and by U.S. Ambassador to China Terry Branstad in October, as both departed their posts. All three of these American diplomats spoke highly of the friendships they had developed — and the advancement of educational and cultural exchanges, in particular — during their three-year tenures. They conveyed their profound appreciation for Chinese hospitality and their enduring conviction of the value of people-to-people diplomacy.

From hope to fear

In Washington, however, the political sentiment could not be more shockingly divergent, as decoupling dominates American policy dialogues about China. An ongoing U.S.-China geopolitical rift has collided with the coronavirus pandemic and a presidential election that has candidates racing to brandish their anti-China bona fides. Clearly, early objectives for changing China’s political system through cultural diplomacy and “peaceful evolution” have not worked out the way Washington had hoped. The pervasive view of bilateral educational exchanges is no longer one of hope for positive change through engagement but rather one of fear that Chinese scholars and students at American educational and research institutions are “weapons” of the Communist Party of China.

Beijing has been accused of not only weaponizing Chinese students enrolled at universities in the United States — where they supposedly pilfer intellectual property and advanced technology — but also of using cultural exchanges to enhance the influence of communist ideology and interfere in U.S. politics. It seems that some policymakers in Washington have only just now discovered that China is led by a communist party, and that it presents, they believe, an existential threat to the “free world.”

In February 2018, FBI director Christopher Wray bluntly described the threat from China as “a whole-of-society threat,” thus potentially implicating all Chinese people as threats to America. To act on these fears and concerns, the U.S. Department of Justice undertook the first initiative ever to focus on a specific country (and ethnic group). Called the “China Initiative,” it designates some China-related cases as "academic espionage". In 2018, the National Institutes of Health and the FBI jointly began investigating the relationship between researchers in the biomedical field and China. They identified 399 suspects, most of whom were ethnic Chinese. By July this year, Wray claimed that half of the nearly 5,000 active FBI counterintelligence cases underway were related to China, and the bureau was opening a new China-related counterintelligence case almost every 10 hours.

For many policymakers and analysts in the United States, the fear is that unless Washington pivots to a new and effective approach to deal with Beijing, this formidable rival will surpass the U.S. in many important areas and gain a substantial, competitive edge in just a couple of decades, if not sooner. Additionally, U.S. corporate resentment of Chinese state capitalism, dependence on Chinese industrial and supply chains in the wake of the COVID-19 pandemic and concerns about technological surveillance and privacy violations have provided additional impetus to pursue all-encompassing decoupling. These actions have rendered the near-term prospects for improved people-to-people ties bleaker than ever before.

From divergence to decoupling

The deterioration of the bilateral relationship is the culmination of years of disputes, disillusionment, disappointment and distrust between the two countries. Washington has legitimate concerns about Beijing’s excessive domestic political control and aggressive foreign policy stances.

Without doubt, China has taken advantage of the openness of America’s economy, universities and research institutions — especially in terms of entrepreneurial and technological innovation — over the past four decades. China’s adoption of a foreign NGO law, for example, has greatly restrained the activities of American academic institutions and other organizations in the country. At the same time, Beijing can reasonably argue that the United States has designs on obstructing China’s rise to great-power status.

Nevertheless, Washington’s efforts to decouple with China in the educational and cultural spheres are highly controversial and consequential. In autumn 2018, the White House reportedly considered a complete ban on student visas for Chinese nationals, which President Donald Trump ultimately decided not to pursue because of Ambassador Terry Branstad’s strong opposition.

This year, the Trump administration has made several drastic decisions to accelerate decoupling with China, including eliminating the Peace Corps program in the country, issuing an executive order to end the Fulbright program in China and Hong Kong, suspending entry of more than 1,000 Chinese graduate students and researchers believed to be connected with the “military-civil fusion strategy” of the People’s Liberation Army and ordering China to close its consulate in Houston.

The U.S. government also limited the number of Chinese graduate students allowed to major in STEM fields (science, technology, engineering, and mathematics) at U.S. universities and banned Chinese scholars from conducting sensitive research. Before the COVID-19 pandemic, more than 100,000 fewer Chinese nationals received U.S. visas for business, leisure and educational purposes between May and September 2018 compared with the year before — a 13 percent drop.

Although China remained the largest source of international students in the United States in 2019, with 370,000 students, this number is expected to drop dramatically this year and beyond for a host of reasons, including U.S. restrictions on student visas, Chinese students choosing other countries for their foreign studies and the COVID-19 pandemic. As for U.S visas, Caixin reported in June that only eight students from the People’s Republic of China were granted F-1 (student) visas and eight received J-1 (exchange visitor) visas. By comparison, in June 2019, 34,001 F-1 visas and 5,736 J-1 visas were issued to Chinese citizens.

Concerns have been further inflamed by the proposed travel ban on CPC members, which would affect 92 million people and more than 200 million family members. Given the size of China’s population, it would be virtually impossible to enforce this ban, as there is no way to effectively determine the political background of Chinese visitors. Yet this proposal, if adopted, would affect roughly 300 million Chinese people –– and implicate as many as 1.4 billion. Repercussions from these efforts are mounting across the Pacific.

As the soft power inherent in people-to-people exchanges fades, rising racism and McCarthyism targeting Chinese nationals and Chinese Americans have filled the void. Without doubt, such sentiments will not inspire China-based observers to challenge authoritarian CPC leadership. On the contrary, this trend alienates the Chinese people and pushes them to embrace anti-American nationalism. It also puts liberal, pro-U.S. Chinese intellectuals in China in a difficult position.

Although national security and intellectual property rights should be vigorously protected, the racial profiling of China-born scientists or Chinese American researchers will hurt U.S. interests in three important ways.

First, a  study this year by the Paulson Institute shows that the United States is home to 60 percent of the world’s top researchers in the field of artificial intelligence, of which native American researchers account for 31 percent and China-born researchers account for 27 percent. The U.S. government decision to limit or even ban Chinese graduate students from majoring in STEM fields and conducting research on sensitive subjects will drastically reduce the number of Chinese scholars and students contributing to these fields in the United States in the near future. As writers for The New York Times have concluded: “If the U.S. no longer welcomed these top researchers, Beijing would welcome them back with open arms.”

Second, the Trump administration’s restrictions on academic exchanges — including the cancellation of the Peace Corps and Fulbright programs in China — will significantly diminish America’s access and opportunities to better understand this complicated country. At a time when it’s imperative for the U.S. to know more about China, policymakers are cutting off channels for learning.

Third, if Washington policymakers continue to pursue all-encompassing decoupling, they will likely negate any influence and leverage they could otherwise exert on broad constituencies in China. Further, if Washington disengages from China in the areas of economic and financial coordination, public health cooperation, environmental protection, energy security and cultural and educational exchanges, then there is little the United States can do to sway the opinions of Chinese policymakers, many of its intellectuals and the general public.

The people-to-people ties that have bound the U.S.-China relationship together over decades of engagement have frayed and the fabric is very near unraveling. While worrying Chinese actions have pushed Washington to rightly adjust its China policies, the costs of eliminating educational and cultural exchanges far outweigh the benefits. Ultimately, sacrificing the development of interpersonal ties does not punish the CPC. Rather, such actions are merely self-deceiving, relinquishing the last remaining vestiges of soft power leverage the U.S. holds over China.

People-to-People ExchangeCultural Exchange
printTweet
You might also like
Back to Top
CHINA US Focus 2022 China-United States Exchange Foundation. All rights reserved.