On a rainy July afternoon in 2017, I was in Jinhua, China, a city just south of Shanghai, to visit a pig farm. This was not just any pig farm – the Mebolo farm grows pigs that become the prized Jinhua Hams, a Chinese delicacy for nearly 1500 years.  Long before Italians produced prosciutto and the Spanish their Jamón serrano ham, Marco Polo discovered Jinhua ham in the 13th century and brought ham-making techniques back to Europe.

In China, pork is the king of meats, with the Chinese per capita consumption of pork being the highest in the world. In August of 2018, the Chinese were raising 500 million pigs, enough to meet the huge domestic demand. Half of the world’s pigs are grown in China, yet the price of pork in 2014 was one-third higher than the rest of the world due to high demand. Unfortunately, today, just as China is dealing with a human health crisis from the coronavirus, its agricultural economy is under threat from a pig disease: African swine fever.

When the trouble started

I was in Jinhua to see the efforts the pork producer was taking to produce energy from the manure and recycle their wastewater through irrigation. While there, I also observed its extensive biosecurity efforts that mirror those used at all large Chinese and U.S. swine facilities to prevent the spread of disease to their valuable livestock. After all, one of these special pigs can sell for up to $1200. They wash vehicles before they come onto the farm, and people must shower and wear special coveralls before entering the barns, all to keep contagious diseases from infecting the pigs. A study of biosecurity practices on the pig farms of China’s Guangdong Province showed that large farms had more complete biosecurity than small farms, and that only about half of all the farms were practicing biosecurity measures.

These extreme measures are shown to be justified as African swine fever is now decimating China’s pigs. By the end of 2019, half of China’s swine herd – 250 million pigs – were dead. By as early as May of 2019, a quarter of the breeding animals were taken by the disease, limiting their ability to rebuild the herd. While not afflicting people, African swine fever has no treatment and is fatal to pigs. Pigs are infected by contact with sick domestic or wild pigs, contaminated vehicles or equipment, and by eating garbage that contains contaminated pork. 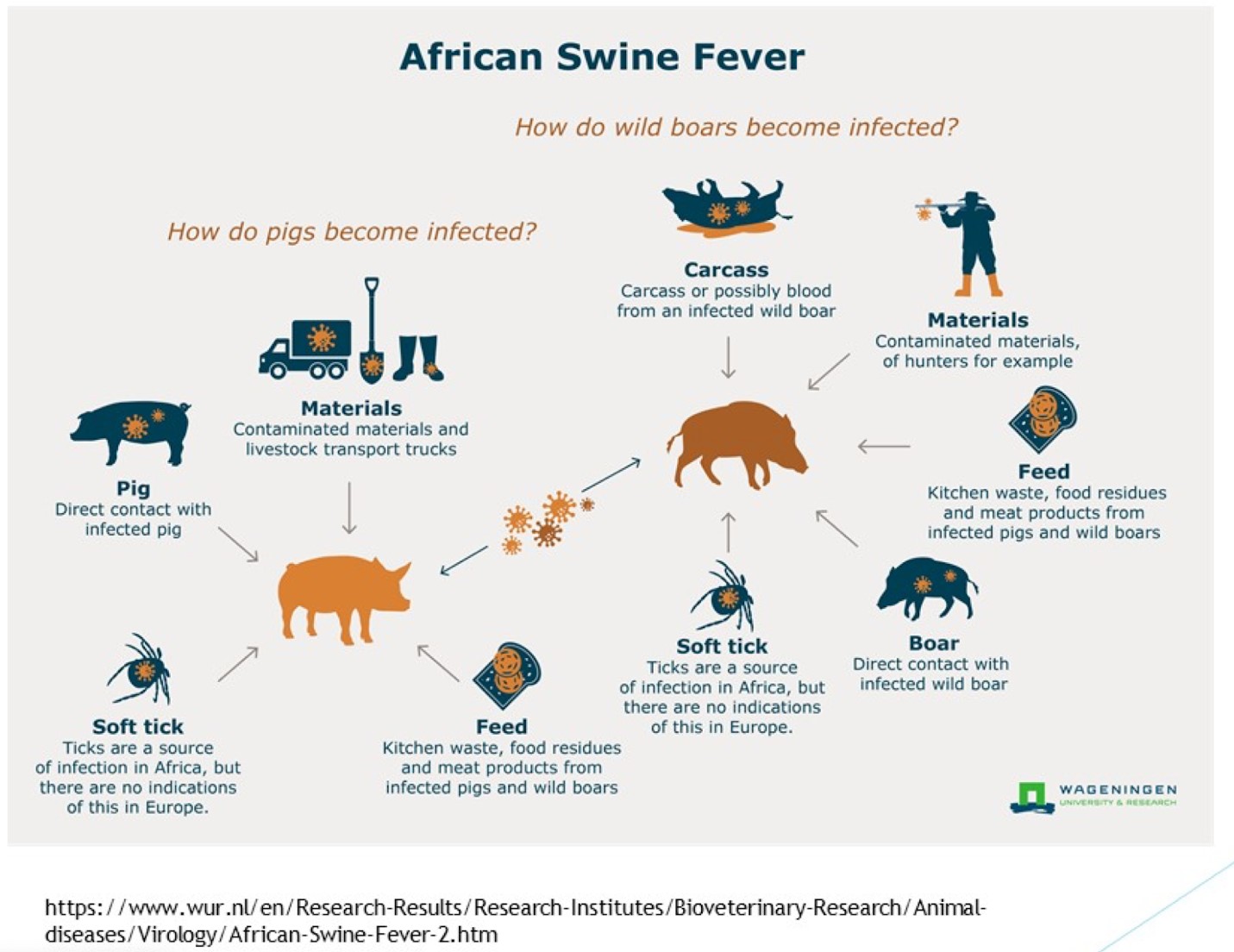 China can no longer produce enough pork to meet the demand, presenting a great opportunity for U.S. pork producers. Right now, the export potential is $24.5 billion annually. The U.S. National Pork Board just released an assessment of the future of China’s market: they predict African swine fever will fundamentally change the way pigs are grown in China, away from small backyard herds to modern, biosecure pork production facilities. Additionally, the Chinese have begun to not only increase their meat imports but also import breeding stock to repopulate their herds. They will also be making big investments in facilities and equipment. China is currently importing pork from Europe and Brazil, and the first 900 replacement breeding pigs were flown in from Denmark in October, 2019.

It will likely take a decade for China’s pork production to recover, so the time is now for the U.S. to help China replenish its pork reserves and modernize its animal agriculture. However,  the Phase 1 trade deal that left the 60% pork tariff in place remains an obstacle to U.S. aid to its eastern counterpart. Finalizing U.S.-China trade agreements is more important than ever.

Piles and piles of dead pigs

As a growing environmental and food security disaster looms, the new challenge that U.S. research and expertise could help with is how to safely dispose of millions of dead pigs. Starting in the northern province of Liaoning in August 2018, African swine fever spread 3,000 km south to Guangdong by December 2018, then 3,500 km west to Xinjiang by April 2019. Imagine a disease sweeping from Maine to Florida to Denver over a period of 9 months. By Chinese law, to stop such a spread, once the disease breaks out, all of the pigs within a 3-kilometer radius must then be killed.

So, what happens to all the dead pigs? The common agricultural practice in China and around the world when a few animals die is to have their carcasses recycled through rendering. At a rendering plant, the carcasses are cooked at 43o  to 93o  Celsius  (110o to 200o Fahrenheit ) to kill pathogens, melt and separate the fat and cook and dry the meat. The fat is recycled as tallow, an important industrial lubricant, and the meat protein is recycled as animal feed or fertilizer.

Unfortunately, during a disease outbreak, the number of animals surpasses the capacity of the rendering plants. Some of the pigs have been hauled to landfills. To prevent odors and spread of disease, other animals are burned or buried. Burning creates air pollution problems, burying threatens groundwater pollution, and both are wasteful.

Fortunately, large animal mortalities can be recycled in another way – composting. Dead animal composting was developed in the United States in the 1980s in response to devastating outbreaks of avian influenza, AKA Bird Flu. The procedure was later adapted to handle everything from pigs to exotic zoo animals. Dr. Harold Keener, an agricultural engineer at Ohio State University, has developed methods and procedures to safely compost poultry, cattle, and pig carcasses.

For routine farm operations, specially designed bins with roofs can be constructed at a livestock facility to compost the expected number of mortalities. Setting up compost piles in windrows has worked during several avian influenza outbreaks in the U.S. and Canada from 2002 to 2016. During a 2004 outbreak in Maryland and Delaware, composting the birds in windrows inside the barns was able to stop the virus spread in 14 days.

Once composted, the remaining material is free of disease and can be safely applied to the soil. Enriching the soil with organic matter improves the soil’s ability to grow crops. By composting animal mortalities, the carcasses are recycled as a beneficial soil conditioner rather than disposed of as a solid waste.

The threat is spreading

African swine fever first appeared in Kenya in the 1920s. Its spread through Sardinia, Spain and Portugal was halted by killing infected and exposed animals in the 1990s. Outbreaks that occurred in the Caribbean were also eradicated. Nevertheless, pork producers are worried about the disease moving to the U.S., so efforts are underway to protect the meat supply.

Contaminated pork brought in illegally by international travelers is a real threat. Since March 2019, the United States Department of Agriculture (USDA) has been using trained detector dogs in airports to sniff out pork. However, if contaminated pork is thrown in the garbage, it could become food for wild “feral” pigs that can harbor the disease. To counter this, the U.S. recently tested a new vaccine that is effective against the current strain of African swine fever, a development that should help slow the disease spread.

Biosecurity agencies around the world are now identifying composting as the preferred disposal method for both routine and emergency animal mortalities. The spread of African swine fever is now moving beyond China throughout Asia to North and South Korea, Indochina, Indonesia, and the Philippines. As aid agencies are helping farmers deal with this and future disease outbreaks, educational programs and composting equipment can be made available to turn the waste carcasses into recyclable compost.