The U.S. retreat from Afghanistan leaves the country with 90 percent of its population living well below the poverty line, at less than 2 dollars a day, while political instability, the opium trade, and tribal violence threaten the Taliban’s future plans.

However, the Taliban has the chance to exploit the nation’s significant deposits of rare-earth metals and copper. Beijing has notably been open and forward about establishing close ties to its neighbor. Afghanistan’s vast mineral reserves were once valued by its government at as much as $3 trillion – hinting that it could become the ‘Saudi Arabia of lithium.’ Can these crucial resources fuel Chinese industry and production five or ten years from now?

China plans to improve living standards in Afghanistan by shifting the focus of the Belt and Road Initiative (BRI) from Southeast Asia to Afghanistan and Pakistan.

The geopolitical and macroeconomic significance of the U.S. retreat from Afghanistan is that China can now expand its sphere of influence to include Afghanistan in regional projects involving Pakistan, Iran, and Iraq. Geographer Halford Mackinder placed Eurasia and the Asian heartland at the center of geopolitical importance in the 19th century, and now, for the first time in 200 years, the Western powers seem to be leaving the Eurasian continent to other polities to govern. While China expands its influence in Afghanistan, it also blocks India and other U.S. allies from Central Asia, and thereby threatens the post-World War II and NATO-ensured liberal world order.

Beijing could move the costs of production from current zones in Africa and Southeast Asia to the Middle East and open up exposure to reciprocal markets to expand regional development. Beijing could also evade protectionist measures in the West by exporting from potential partners in the Middle East, as it did in Southeast Asia. In doing so, Beijing could gain access to cheaper foreign energy and minerals in exchange for raising living standards in Afghanistan. Even the most marginal improvements within a reasonable amount of time could outperform the U.S.-led development projects that took place over the last two decades.

Therefore, the minerals in Afghanistan will directly contribute to China’s ambitions to bring together a large part of the Indian Ocean littoral and Eurasia through high speed rail lines, pipelines, and maritime linkages. Nonetheless, al Qaeda, Daesh, and the Islamic State are terror groups that threaten China’s plans for business and regional development. Beijing will need to present a plan that will entice the Taliban to function in a united and business-like manner with minerals at the center of negotiations. The Taliban will need to tame extremist groups to make this happen.

Afghanistan possesses about 1 trillion gemstones and minerals. In the past, Afghanistan produced rubies, emeralds, tourmalines, and lapis lazuli, while it today produces the ever more valuable iron, copper, lithium, cobalt, bauxite, mercury, uranium, and chromium. Despite the importance of these minerals for next-gen technologies, it could take up to a decade for large-scale mining to turn a profit. The Chinese might need to provide the investment and expertise to make this a reality.

British, German, Soviet, and U.S. Geological Survey (USGS) experts all commented on the richness and abundance of Afghanistan’s mineral sites. Chinese and Indian companies expressed strong interest, and actual concessions were granted as early as the 2010s, but projects were abandoned over contract disputes and concerns about security.

The original USGS analysis, noted as conservative but also preliminary, stated that total copper resources for all known deposits sum to about 57.7 million metric tons valued at about $516 billion. Afghanistan is among the top five nations for copper reserves in the world. 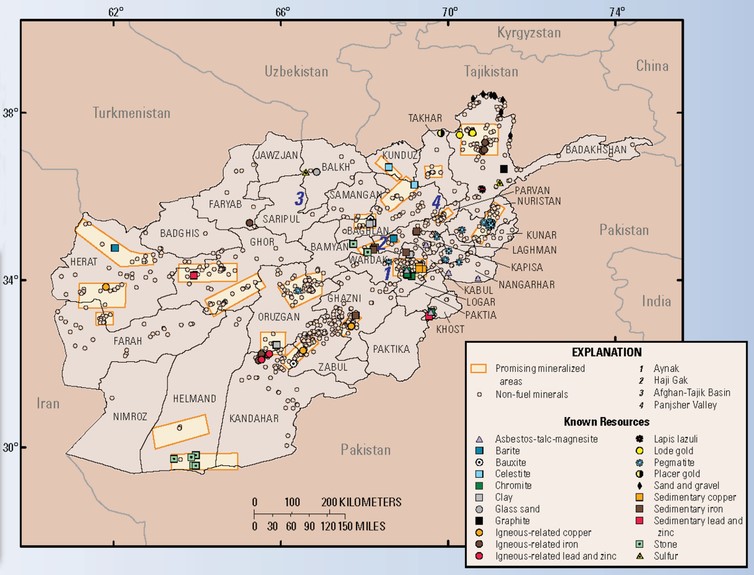 The Aynak core body is located about 30 kilometers southeast of Kabul and contains copper and cobalt deposits worth an estimated $102 billion. There is also $336 billion in iron deposits in the Haji Gak deposit of Bamiyan Province, and significant lithium deposits in Nuristan Province.

There is currently massive global demand for metals, particularly copper, lithium, and rare earth elements, which are essential to the renewable energy and electric vehicle industries.

The reality is that Beijing will need to invest in infrastructure to make mining projects feasible. Afghanistan lacks quality roadways, railways, and electricity. Railway infrastructure is necessary for the transport of ore to foreign markets. There are also environmental concerns about proceeding with such projects.

China has previously faced stiff obstacles to investment in Afghanistan. In the mid-2000s, Metallurgical Corp. of China Ltd. won an almost $3 billion bid to mine copper at Mes Aynak, near Kabul. Due to security concerns and the discovery of various historical artifacts, progress stalled. Keep in mind, the U.S. still maintains sanctions on the Taliban and can veto any decisions made by China and Russia at the UN Security Council.

Washington already froze nearly $9.5 billion in Afghanistan’s reserves, and the International Monetary Fund cut off 500 million in financing after the Taliban gained control of the country. 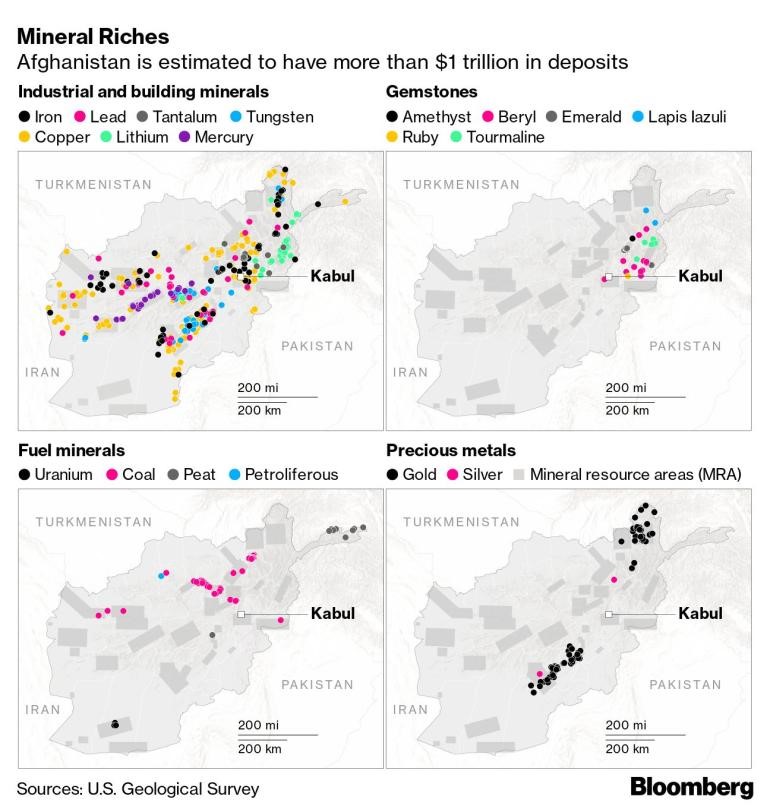 Afghanistan currently struggles with an economic crisis with flour and oil surging prices, a shortage of medical supplies and drugs, and a lack of cash and liquidity.

As battery materials become more indispensable to global supply chains, Afghanistan will become more critical as producers look to invest in lithium supply as the U.S., Japan, and Europe all want to cut dependence on China for rare earth materials.

Afghanistan
printTweet
You might also like
Back to Top
CHINA US Focus 2023 China-United States Exchange Foundation. All rights reserved.