Apple Caught Between the U.S. and China

Recently, Apple announced a set of additional privacy protections. The “private relay” feature obscures a user’s web browsing from service providers and advertisers. It will not be available to users in China.

After the announcement, the New York Times reported that Apple had given in to China in a hard bargain for the Chinese market. Inadvertently, major media are today contributing protectionism, as they did in the '50s.

No multinational can ignore local responsiveness

While Apple has not made the private relay feature available to users in China, the same goes for several other countries, including Belarus, Colombia, Egypt, Kazakhstan, the Philippines, Saudi Arabia, South Africa, Turkmenistan, and Uganda.

Since the 1980s, the leading multinationals have sought to reconcile global efficiencies with responsiveness to local markets. Yet, many American technology giants still earn the bulk of their revenues in the high-income U.S. and Western European markets. In contrast, Apple has proved more innovative in global markets.

In China, the company is trying to adjust to local market practices, just as all foreign and especially Chinese companies face great adjustment pressures in the U.S.

There’s a difference, though. Apple and other foreign ICT giants remain welcome in the Chinese mainland. Yet, the reverse no longer applies, as evidenced by a decade of increasing persecution of Chinese technology companies in America from Huawei to TikTok, and the consequent plunge of Chinese FDI in America.

Still another protectionist assumption is the idea that "the Chinese are taking away American jobs." When the Trump and Biden administrations say they seek “to bring jobs back from China,” the premise is that Apple’s “dependency on the Chinese” keeps jobs away from American people. The assumption is flawed.

In August 2018, Apple became the first publicly-traded U.S. company valued at over $1 trillion; today its market capitalization amounts to $2.2 trillion. Its products are said to have some 1.7 billion users worldwide. Let’s illustrate the point with the value captured as a percent of the retail price of a smartphone (iPhone 7). 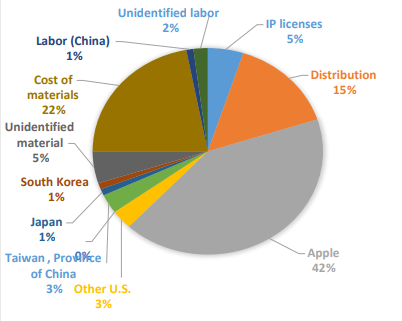 Usually, multinationals' revenues contribute to consumer welfare via progressive taxation. However, U.S. companies tend to minimize taxes via creative accounting and tax havens, so there’s a gap between what’s paid officially and effectively.

Since the 1980s, these disruptive changes have dramatically contributed to erosion in progressive taxation, consumer welfare and thus to income polarization in America. That’s America’s challenge, however; not China’s.

So, if the value capture isn’t the issue, what about offshoring to China? That’s the third misguided assumption.

Apple’s “Greater China” market includes not just China, but Hong Kong and Taiwan. It has assembled most of its products in China for a quarter of a century, thanks to Foxconn (Hon Hai), the huge Taiwanese multinational electronics contract manufacturer founded by Taiwanese billionaire Terry Gou.

Moreover, work conditions at Foxconn factories have been a matter of public debate since the early 2010s. The basic salary for a worker at a Foxconn facility is about $315 per month; less than 10% of the median American salary.

In June 2017, Foxconn said it would build a $10 billion TV manufacturing plant in southeastern Wisconsin that would initially employ 3,000 workers set to increase to 13,000, in return for the highest subsidies in U.S. history. A few months later, a plant was launched in Mount Pleasant, Wisconsin (Figure 2).

Figure 2 The Rise and Fall of Foxconn’s US venture 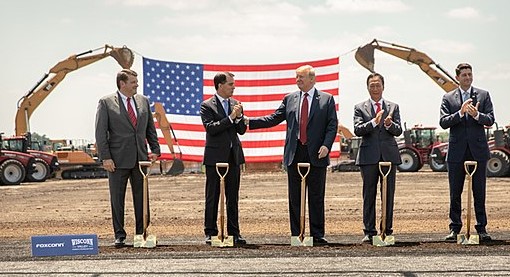 However, Foxconn began soon to reconsider its initial plant plans due to the high labor costs in the U.S. Following Biden’s election triumph, Foxconn announced it would reduce its planned investment to $672 million with 1,454 new jobs.

After Wisconsin’s commercial debacle, Guo tried to enter politics. He hoped to stabilize Taiwan’s future by challenging the nationalist Democratic Progressive Party’s Tsai Ing-wen in the 2020 election. As Guo finished second in the Kuomintang primary, he distanced himself from politics and the incumbent Tsai was re-elected.

Irrespective of Taiwan’s commercial or political future, the fact remains that as long as per capita incomes differ significantly among economies, opportunities for offshoring will abound.

And the final misguided protectionist assumption: What if Apple would refocus its operations into the U.S., as it is being pressured to do?

In the past decade, Apple’s quarterly revenues from Greater China have increased to $21.3 billion (Q1 2021). Its revenues from China remain around 15% of the total. That’s still significantly less relative to highly exposed U.S. companies in China.

Last year, Apple had a great year in China, where full year shipments returned to the 2018 level, driven by both iPhone 11 and iPhone 12 models. It has recently added a dozen new Chinese companies to its supplier list. The Chinese market is vital to Apple’s global future.

The developer community of Apple’s iOS app ecosystem has surged to over 4.4 million third-party developers in China. Moreover, China's shipment of wearable devices notched robust year-on-year expansion in the first quarter of 2021.

To position for the lucrative electric car future, Apple is in early-stage talks with BYD and CATL, and possible other companies over battery supplies for the "Apple Car,” which it is reportedly planning to start producing in 2024. The Chinese car market is critical to Apple since rapid growth remains in the mainland.

Over time, Apple’s revenues from China have potential to increase significantly, thanks to its innovative ecosystem which is hard to replicate by its competitors. Yet, in the White House, economic terms are now subject to geopolitics. Apple’s plans could be derailed by U.S. pressures to keep manufacturing in the U.S.

To sustain its global position, Apple is trying to navigate amid tensions between China and the U.S. If it ignores U.S. views, it will face pressures in the U.S.; its largest current market. If it neglects Chinese views, it risks failure in China; its pivotal future market. What is certain is that:

2. Americans did not lose their jobs to the Chinese. Rather, income polarization in America is driven by misguided domestic policies that derail consumer welfare.

3. Nor is offshoring the cause of U.S. malaise. In Apple’s case, it has benefited particularly in Taiwan. Those workers have salaries Americans can’t and don’t accept.

4. If Apple is forced out from China, it stands to lose far more in smartphones, development, wearables, electric cars and future products.

Like other U.S. ICT giants, Apple has already lost billions of dollars in missed opportunities. Apple’s asset is its extensive win-win innovation ecosystem, which is based on competition and cooperation across borders worldwide. In contrast, the new U.S. protectionism is predicated on inefficient win-lose ecosystems, mainly in high-income economies.

Apple’s greatest challenge is not China, but the underlying conflict of its ecosystem and Trump-Biden protectionism.