Building Out a Financial Ecosystem: A Timeline of RMB Hubs in Europe

Looking at it as a race, the British took the early lead to be the premier non-Asian hub for offshore renminbi – at least in terms of public relations. When Chancellor Osborne celebrated the official launch of a public-private sector initiative to make London a center for renminbi business on April 18, 2012, Osborne was explicit that “by acting as a bridge between East and West, we can secure London’s position as the leading financial centre in the years to come.” This claim would not go unchallenged by other European Union Member States, however. Frankfurt, Luxembourg, and Paris all sought to reinforce their credentials as important financial centers by wooing the Chinese currency.

In fact, by early 2015, the UK, Germany, France, and Luxembourg all had passed the finish line to claim the title of offshore renminbi hub.  Instead of a winner-take-all prize, Beijing had granted each of the four main EU financial hubs the right to make claims supporting their importance as renminbi hubs.  Why would it do this?  An examination of this process in terms of the timeline for the hubs to be created suggests that the People’s Republic’s renminbi internationalization strategy at this stage is more about setting up a network that can be tapped when the time is right, rather than trying to encourage uptake of the currency in today’s markets.

Let’s set the benchmark for being defined as an offshore renminbi center according to four main events: existence of a bilateral swap agreement between the local currency and the renminbi; access to the Renminbi Qualified Foreign Institutional Investor (RQFII) scheme; designation of an official offshore clearing and settlement bank for the offshore renminbi; and issuance of a yuan-denominated bond in the local (offshore) market by either a mainland Chinese state-owned financial institution or government body.

The first three milestones have been labelled the “three gifts” by Kathleen Walsh and Geoff Weir in a 2015 report.  They are called gifts because Beijing had to make an official policy decision to enter into a swap agreement, extend RQFII quotas, or allow one of the state-owned banks to operate as an official clearing bank.  As such, they are indications of the PRC’s strategy for internationalization of the yuan through offshore hubs.

I would add a fourth gift from Beijing: issuance of a yuan-denominated bond in the local (offshore) market by an official Chinese institution, which can include one of the state-backed major banks. Issuance of a dim sum bond by a Chinese institution is a symbolic gesture on the part of the PRC to show support for a particular hub.

Each of these gifts are necessary for a jurisdiction to call itself a hub, not only for their individual value but because they work together to establish a financial ecosystem.  With them in place, Luxembourg, Frankfurt, Paris, and London can all deliver an array of invoicing and investment services in the Chinese currency. 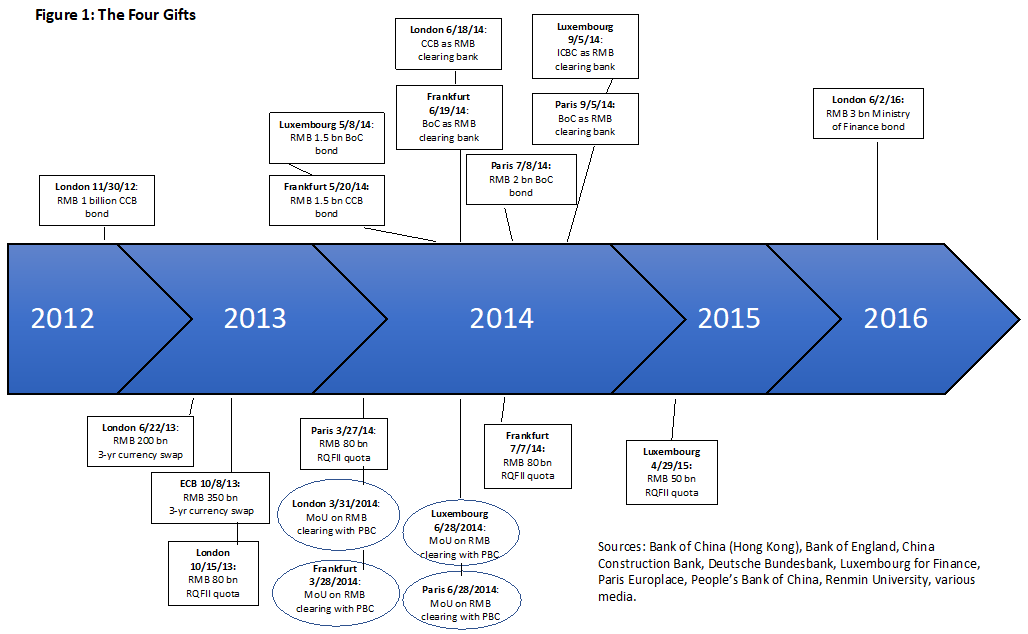 Figure 1 shows that London was granted each of the milestones ahead of the other three EU hubs, beginning with a large lead with the 2012 bond announcement. This is not unwarranted: London is at the top of rankings amongst all international financial centers and has maintained dominance as the global hub for foreign exchange for decades.  Beijing’s choice was prestigious indeed.  Frankfurt, however, did not lag far behind, and in fact had caught up to London in terms of achieving all four gifts less than one month after the City did in 2014.  This temporal evidence hints that despite London’s best efforts to position itself as the preeminent offshore hub in Europe, indeed the Western hemisphere, Beijing was not willing to grant it that status.  Moreover, within the Eurozone, the timeline shows that China gave each of the four hubs a ‘first,’ suggesting that although it seemed to position Frankfurt as the favoured Eurozone hub by timing gifts closely with London, the PRC was not ready or willing to place its bets on any of those three.  Paris and Luxembourg were also part of the renminbi internationalization history.

Of course, these were not the only EU financial centers that had received China’s four gifts. All members of the Euro-zone technically were covered under the bilateral swap agreement at that time, but none had quotas or clearing banks. Worldwide, by the end of 2015, a total of 32 economies had bilateral swap agreements with the People’s Bank of China, fourteen had RQFII quotas, and clearing and settlement banks had been named in twenty countries. Taiwan, Hong Kong and Singapore dominated the offshore renminbi bond market in terms of issuance, but the Australia exchange and the Swiss Exchange had each reached one percent of total bonds issued by mid-2015, with smattering of other exchanges making up one percent of the global total of exchange-listed bonds. (Hung et al, 2016).  By the middle of 2015, Beijing had set up a network of offshore hubs not just within the EU, but in fact on every continent but Africa.

What does it mean?

A review of the timeline of how Beijing has fostered these hubs suggests that China has taken a deliberate approach to ensure a network of hubs within the European Union that can continue to coexist and prosper along with the currency’s spread. Although it capitalized on an eager UK to include one of the world’s most important financial capitals in this network, it appeared to be equally concerned with giving Frankfurt and Paris roles that reflected their importance to the EU and to China, and had much success with taking advantage of the opportunities that Luxembourg offered.  China now has partners with whom it can work as the market develops, and all of which will continue to present evolving offers even as – or perhaps especially as – Brexit impacts the role that London can play in international markets.  And as the renminbi’s own role in global financial markets evolves, China will have different gifts to bestow upon these offshore centers.  Whether China may favour one or the other at different times, it nonetheless now has a network that gives it the flexibility of choice.  The offshore market can now evolve according to demand, and if or when Beijing decides that the yuan should play more of a role as a global currency, it has the infrastructure ready to go.

China-Europe RelationsRMBEuro Zone
printTweet
You might also like
Back to Top
CHINA US Focus 2018 China-United States Exchange Foundation. All rights reserved. Disclaimer