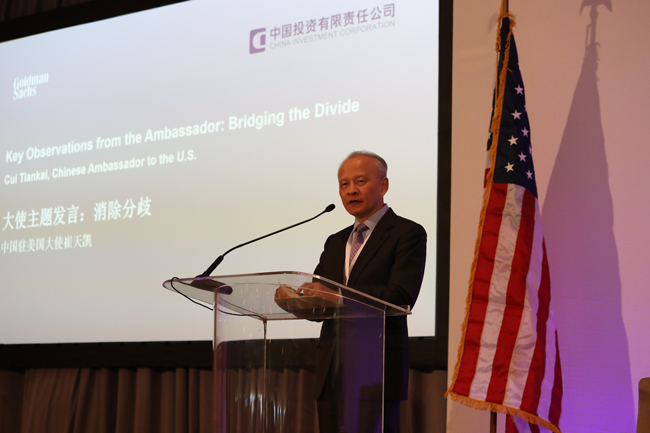 A version of this speech was delivered at the US-China Business Summit in Chicago on the 18th of April 2018.

It is a great privilege to join you this morning in Chicago. Let me thank China Investment Corporation and Goldman Sachs for co-hosting this business summit.

My host asked me to say something about bridging the divide. I think there are pressing needs to address this issue, because more than ever before, people are so connected and divided at the same time. So I would like to share some of my thinking on some basic divides in today’s world from the point of view of political economics.

First, we have to deal with the economic and social divide in many countries. Over the past few decades, technological progress has greatly enhanced productivity, creating huge wealth around the world. So ideally, everybody should be better off.

But the fact is the gap between the better-off and the worse-off is still growing even in some developed economies. On the one hand, there is a concentration of wealth and power. On the other hand, there is marginalization of so many people not only economically but also socially and culturally. This is not just because technological progress is too fast for the society to adapt. More important, I believe the neglect and lack of will to act on the part of some policymakers for an equitable sharing of the newly created wealth are also responsible. Clearly, this is not a matter of external trade. It is a matter of domestic governance.

This growing divide will hurt not only the prospects of economic growth, but also social cohesion and political stability. Now technological progress is continuing, at an even faster pace. We have all seen how IT has changed the way we produce and do business. Now the emergence of AI could, in an even more significant way, change production, consumption, social interaction, and our daily life. So there is a real possibility that the economic and social divide will grow even wider and deeper. So all of us share the responsibility to help adapt to these tremendous changes and make sure that the newly created wealth will benefit more people.

Second, we have to address the international divide. Globalization has changed the world economic and political landscape. Many countries have seized the opportunity and thus achieved development. But there are still many countries that are left behind. Even for the fast growing emerging markets, poverty is still a formidable challenge. So the international divide between the more developed and the underdeveloped is still clearly there. But already in some parts of the developed world, people are getting worried that their developing partners are catching up too fast and becoming too competitive. And we see a clear rise of protectionism and economic nationalism in many parts of the developed world. I think we should all be alarmed by this emerging trend.

Economic growth and technological progress has its own logic. Higher productivity drives the expansion of the world market which, in turn, stimulates more economic development and the spread of technology. And this is a positive development. It creates opportunities for all. A world that is always divided between a few highly developed places and a large number of underdeveloped places has few prospects for lasting peace and sustainable prosperity.

We recognize that a key element for competition is fairness. We have to make sure that competition is fair, and that there is a level-playing field. At the same time, against the background of very different levels of economic development among countries, absolute reciprocity is not fairness. It could be very unfair.

Thirdly, we have to deal with the divide between 21st century realities and outdated policies. Today we live in a world that is pretty much globalized. We have global opportunities as well as global challenges. No country can handle all this by itself. And no country can prosper in isolation. But now we see policies that attempt to close the door and resort to unilateralism. And to succeed in today’s world, the best choice is to take a win-win approach. But now we see policies that are so strongly influenced by a zero-sum mentality that regards other people’s success as a loss. Perhaps they believe that by doing this, they could gain more. But I don’t think such a mentality is helpful to anyone.

If you want more, let’s work together to make the pie bigger. With a zero-sum mentality however, you could lose the share you already have.

Recently there has been so much talk about a possible trade war between China and the United States. So let me make this clear: Trade is for mutual benefit. War is about mutual destruction. A trade war will only destroy trade itself. So such policies are not in line with the reality of the 21st century. They did not even solve the problems of yesterday, still less the problems of today and tomorrow. So I believe the business community should give policymakers good advice so they can adopt good policies.

Last but not least, the best way to bridge the divide is to enhance connectivity – not only in infrastructure, but also in cyberspace, trade, finance, policies, and people. The Belt and Road Initiative is an excellent example of this. It was designed and initiated exactly for the purpose of enhancing connectivity throughout the world so that everybody can share the opportunity of development. So I hope there will be stronger participation by the business communities of both countries in this Initiative.

In conclusion, let me say there are still significant divides in today’s world. Our job is to help narrow and bridge these divides so that we will have greater prosperity and equitable sharing of the benefits. Let’s work together closely to build a bridge over the troubled water today.

China-US TradeTrade WarBelt and RoadTrade War Benefits No One
printTweet
You might also like
Back to Top
CHINA US Focus 2018 China-United States Exchange Foundation. All rights reserved. Disclaimer